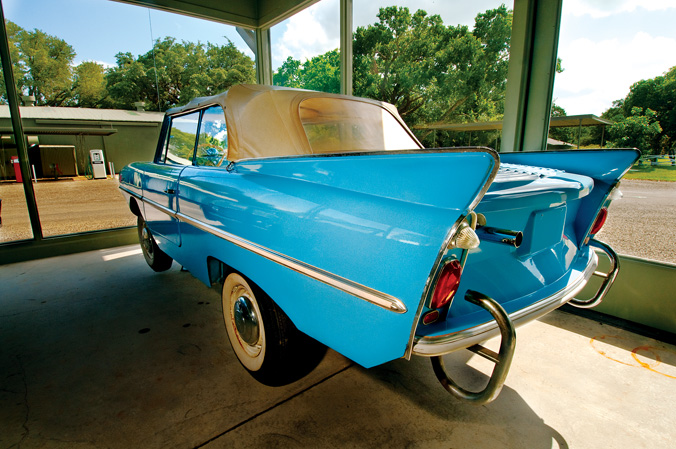 Between the day he became president in November 1963, and the day he left the White House five years later, Lyndon Johnson returned to the Hill Country 74 times. When Air Force One crossed the Red River, Lady Bird’s press secretary, Liz Carpenter, said, “His shoulders would start to relax.” The 36th president knew his boots would soon touch down on land that he loved—the rocky, rolling LBJ Ranch.

In 1972, the Johnsons donated their home and 690 acres for a national park. President Johnson died at the ranch in 1973, but Lady Bird continued to live there part-time until her death in 2007.  Before the National Park Service began allowing private vehicles access to the ranch in 2008, the only way to gain admittance was to stop at LBJ State Park and Historic Site Visitor Center and take a guided bus tour.

Today, thanks to the Johnson family and LBJ National Historical Park superintendent Russ Whitlock, visitors can not only wheel around the ranch, but they can also tour seven of the Texas White House’s 28 rooms.

Now that we can drive through the pastures and walk into LBJ’s surprisingly small office and the comfortable home where the family lived, a trip to the LBJ Ranch is a more intimate, moving experience. It was time, I decided, to revisit the storied landmark with friends.

First, we stop at the state park visitor center—which provides an orientation to the adjacent state and national parks—to pick up a pass, a ranch map, and a CD audio tour. Then, just like LBJ did almost 50 years ago in his white Lincoln Continental, we drive through the main gate—though maybe not as fast as the heavy-footed president liked to speed through himself.

The self-guided CD tour allows us to go at our own pace, stop as long as we like at points of interest, and savor the tranquility of the property Lady Bird called “our heart’s home.”

Johnson was born in a small, dogtrot-style farmhouse on what is now the LBJ Ranch. When Lyndon was five, his family moved to Johnson City. As a United States senator, LBJ yearned to return to the Hill Country he roamed as a boy, and in 1951, he bought his aunt’s home. Twelve years later, added to and improved, it became the Texas White House.

Here, Johnson enjoyed birthdays and Christmases, convalesced from what he called his “belly-buster” of a heart attack in 1955, and hosted nearly 100 barbecues for VIPs and friends as president. Here, he retreated after, as historian and confidante Doris Kearns Goodwin wrote, “The Great Society crumbled into Vietnam.” And here, at age 64, he died on January 22, 1973.

After leaving the visitor center, we continue to Sauer-Beckmann Living History Farm, where visitors can see how the Johnson family’s German-Texan neighbors lived. Here, park employees in period dress churn butter, make soap and cheese, and plow the garden with horses.

After our visit to Sauer-Beckmann, we head for Ranch Road 1 along the Pedernales River. The white guardhouse on the left, once manned by uniformed Secret Service agents, marks the previous low-water crossing to the ranch. 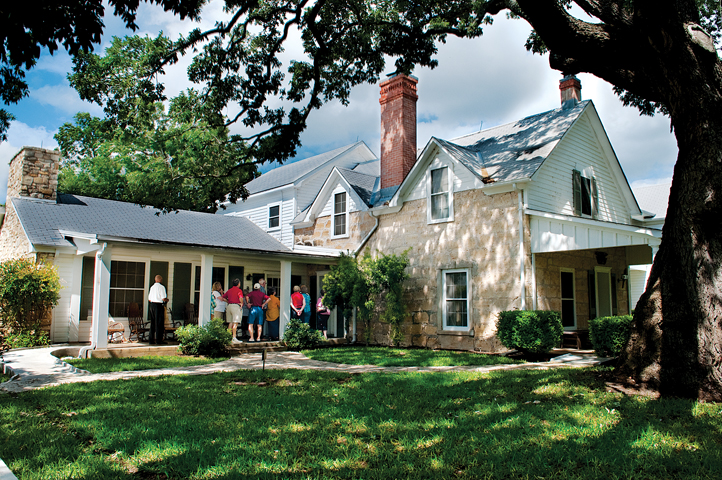 To the right, we see a monumental bronze of Johnson pointing across the Pedernales. Farther along, we spot the bison herd LBJ desired so future generations could see the iconic creature that once roamed the grasslands in massive numbers. As we drive, we watch out for white-tailed deer that can sail over fences and dart across the road.

At Park Road 49, we pull up to the one-room Junction School, where four-year-old Lyndon once sat on his teacher’s lap. Fifty-three years later, LBJ returned as president to sign a landmark education bill with her by his side.

After listening to Lady Bird’s recorded descriptions of her husband’s reconstructed birthplace, we wander down the path to the cemetery where Johnson, Lady Bird, and relatives are buried.

After paying our respects, we return to Bailey Road, where we meet, up close and curious, a herd of Herefords. Nearby, we spot wild turkey and even a blackbuck antelope. The tour takes us to the show barn, center of the ranching operation, then down the road named for foreman Dale Malechek, who once related that LBJ ran the ranch like he ran the government. “I never worked for a harder man in my life,” the foreman told LBJ oral biographer Merle Miller in the 1970s, “but he was the best.”

Due to open this month as a permanent attraction at the ranch, LBJ’s Lockheed JetStar was rescued last year from the Aerospace Maintenance and Regeneration Center in Tucson, Arizona, and restored with the presidential colors—blue, gray, white, and silver. LBJ called the executive jet—faster than a 707 and able to land on the ranch airstrip—Air Force One-Half.

At LBJ’s airplane hangar, which now serves as the visitor center, we browse the bookstore, and in the adjoining enclosed carport, check out Johnson’s rolling stock. There’s the 1934 customized Ford hunting car with four rifle racks and a bar, parked near the German Amphicar that LBJ used to scare passengers on driving tours and after his presidency. “The brakes don’t work,” he’d yell, as the amphibious vehicle headed for Lake LBJ. “We’re going in.”

A $2 ticket gets us inside the Texas White House, where we meet a park ranger. Except for brown shag carpet that Lady Bird nixed and the Muzak that Johnson had piped into each room, LBJ’s office has been restored to the way it was during his five stormy years as the nation’s leader.

It’s a far cry from the august Oval Office in Washington, D.C. The room features an aqua-colored leather desk and chair, paintings of LBJ’s beloved beagles Him and Her, commissioned by Barbra Streisand, and a pillow with the words, “This is my ranch and I do as I damn please.”

We follow Ranger Alex Shane into the living room, where Johnson watched three pre-cable TVs (one for each network); the bar and dining room, where, much to Lady Bird’s chagrin, he had a phone mounted on a table leg; and the kitchen, where we pore over Luci’s montage of family photos, including one of LBJ dressed as Santa 30 days before he died. A look around the den and Yellow Sitting Room and we’re out the back door.

After seeing LBJ’s special corner of the Hill Country, we understand why he spent 484 days of his presidency at the ranch. This land’s rough-hewn beauty heals the spirit and nourishes the soul.