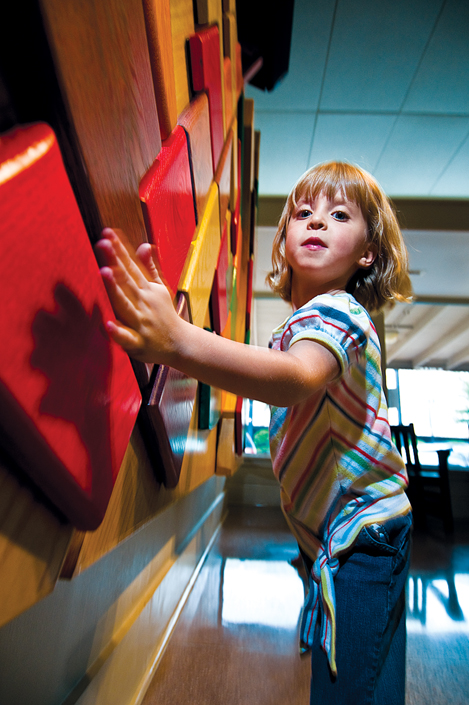 I love gifts for special occasions, but I love the experience of travel even more. For a celebration this past October, my husband, Randy, and I headed west from Austin for Abilene, which promised a restored, 100-year-old downtown to explore and a 1930s bungalow to call home for the weekend.

Whenever I travel in Texas, I like to imagine what the land looked like centuries ago. In the case of the plains that surround Abilene, the vistas were often defined by buffalo—hundreds of thousands of them. By the time the Texas and Pacific Railroad arrived in Abilene in 1881 and town boosters declared it “the Future Great City of West Texas,” though, the buffalo had been eradicated and the Southern Plains tribes that depended on them had been driven out. As banking and retail commerce flourished, it wasn’t long before the wooden buildings in the downtown business district gave way to permanent structures made of brick.

“When the railroad invested in the Grace Hotel in 1909,” says Dr. Donald Frazier, a professor of history at McMurry University, one of three Abilene universities, “it symbolized investors’ faith that Abilene was here to stay. Think of it: The town was only 30 years old, and they built this big brick hotel.”

Today, that big brick hotel—a Mission Revival-style structure that was once the most impressive lodging between Fort Worth and El Paso—houses the Grace Museum, a four-story anchor to the rest of Abilene’s historic downtown. And this year, to celebrate the building’s centennial, the museum hosts an imaginative variety of programs and exhibitions, including a multimedia show by Texas artist James Surls this summer and, beginning in September, an exhibition highlighting 100 years of Texas art.

In the lobby, I was dancing “The Bump” on Edward Weiss’ Grace Notes sound sculpture—making music as I touched each section of the wall with my hip—when I met art curator Judy Deaton. “Sometimes when people come into museums, they feel a little uptight,” she told me, smiling. “The sound sculpture makes everybody relax and sets the tone for the rest of the museum.”

Deacon directed us to the galleries, where artworks from the Grace’s permanent collection rotate with traveling exhibits selected from museums across the nation. And while I’m well past the target demographic of such kid-friendly exhibits as a faux tornado, holographic dance-screens, and a pretend ambulance, I found it hard to tear myself away from the children’s section. I’m eager to see what inventive programming Deaton and her team bring to the museum in its second 100 years.

About the same time the Grace Hotel welcomed its first guests downtown, Abilene’s up-and-and coming merchants, bankers, and ranchers began building homes a few miles south in what is now called the Sayles Historic District. Our lodging for the weekend, one of four vacation homes collectively called the “Sayles Ranch,” lies on the outskirts of the neighborhood. Wide streets and a mix of Tudor, Craftsman, Prairie-style, Mediterranean, and Mid-Century Modern homes make it an interesting walking neighborhood. Randy and I had rented owner Terry Browder’s three-bedroom Falling Star Lodge, thus named because a meteorite—about the size of a cell phone—landed in the lawn in 2006.

Browder, an inveterate antiquer, has decorated the homes with a diverse collection of treasures, including Navajo rugs purchased from the estate of flamboyant West Texas oilman Jack Grimm, a front door purportedly from Conrad Hilton’s first hotel in Cisco, stained-glass windows from a church in Giddings, massive mesquite-log beds crafted in nearby Mineral Wells, plus leather sofas, antique quilts, and pottery from across the Southwest. The effect resembles that of a well-designed, contemporary Western-movie set.

On our last evening in Abilene, we sat on rattan rockers on the back porch not far from where the meteorite had struck the lawn. And we thought: We’ve barely scratched the surface of this great West Texas city. We’ll need to make tracks here again.