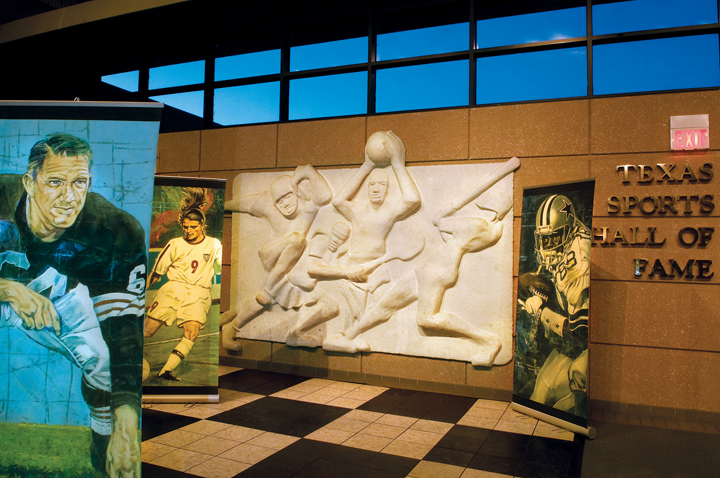 Whatever your game, the Texas Sports Hall of Fame in Waco has it covered. Photo by Kevin Stillman

It’s been almost a decade since I visited the splendid Texas Sports Hall of Fame in Waco. Too long. I was in town to see a Baylor basketball game at the university’s Ferrell Center on a recent Monday evening, so I decided to spend the day reacquainting myself with some of the city’s many tourist attractions, including this remarkable tribute to honored sports royalty. But I never made it out of the Hall of Fame. Four hours here flew by like four minutes. I spent an entire afternoon reveling in the interactive displays, memorabilia, keepsakes, photos, paintings, illustrations, timelines, press clippings and other exhibits at this Lone Star State sporting compendium.

Granted, I’m kind of a sports geek. But even if you’re not, I’ll bet there’s something at the Texas Sports Hall of Fame to captivate your curiosity, whether it’s the javelin or golf bag of arguably the greatest athlete ever, Babe Didrikson Zaharias; rare posters of legendary boxer Jack Johnson; or memorabilia relating to other colossal sports heroes who either came from Texas, or reached their highest level of achievement here.

What particularly impressed me? Where do I begin? Was it the prestigious 1957 Walter Camp Trophy won by Texas A&M’s John David Crow? A detailed history of Dave Campbell’s Texas Football magazine (an informative chronicle of the Lone Star State’s popular football culture since 1960)? Former UH All-American and Basketball Hall of Farner Elvin Hayes’ NBA game jersey? An HBO video of George Foreman’s stunning heavyweight-title-fight-knockout win against Michael Moorer in 1994, whence “Big George” reclaimed his crown after 20 years to become the oldest heavyweight boxing champ in history, at age 45? Those exhibits all got my immediate and undivided attention.

Then, there are the three Super Bowl Champion’s trophy replicas from the powerhouse Dallas Cowboys teams of the ’90s, and record-setting passer Graham Harrell’s Ennis High School helmet and uniform, before he went on to further football fame as an All-American at Texas Tech. A brief, yet compelling, history of the Astrodome gives a nod to this landmark in 20th-Century stadium architecture. I was transfixed by the 1938 Heisman Trophy of TCU Horned Frog Davey O’Brien, who created such a legacy that another trophy is named for him—the Davey O’Brien National Quarterback Award. A bronze football from UT’s 2005 National Championship brings back memories of the Longhorns’ thrilling season and climactic win over USC at the Rose Bowl, while NFL legend and Pro Football Hall of Famer Elvin Bethea’s gigantic pair of shoulder pads serves to remind just how big some gridiron gladiators really are.

The wall-size print of Michael Johnson winning 400-meter gold at the 1996 Atlanta Olympics majestically captures that athletic pinnacle. I enjoyed the exhibit on soccer star Mia Hamm, which not only gives evidence of this sport’s explosive growth over the past decade, but also documents the rise in female athletic participation throughout the world. The Texas High School Football Hall of Fame here, showcasing all-time greats like Kenneth Hall, Warren Mcvea, and Joe Washington, provides an essential overview of this statewide phenomenon/tradition. And a photo of one of my favorite tennis players, Miloslav Mecir-winner of Texas sporting impresario Lamar Hunt’s 1987 WCT championship—served up a vibrant flashback of nostalgic pleasure.

There’s so much more to tell you about: Baseball Hall of Farner Rogers Hornsby (the game’s best right handed hitter ever), has his 1926 St. Louis Cardinals uniform mounted for display. It may be among the Waco collection’s most valuable pieces of memorabilia. Buttons to push for hearing various Texas college fight songs; tributes to such golfing greats as Ben Hogan, Byron Nelson, Ben Crenshaw, Lee Trevino, and Judy Rankin impress with how influential Texas has been in links history. And, informative displays on auto racing’s A.J. Foyt, Carroll Shelby, Jim Hall, Johnny Rutherford, and the Labonte brothers, Terry and Bobby, personalize the world of driving fast. The Hall’s exhaustive number of exhibits offers a tangible glimpse of supreme athletic success.

The breadth of Texas contributions to the sports world simply overwhelms. If I returned to the Hall tomorrow, I would very likely compile an entirely different catalog of lasting impressions. If you live in Texas, and think of yourself as a sports aficionado, you’ve just got to go. The Hall is fun, fascinating, and full of favorites for fans of all ages.

With the already wide range of wonders to see, interact with, and enjoy here, the exciting news is that the Hall of Fame is about to expand to twice
its current size. It will have a Southwest Conference exhibit space on every former member, as well as more room to display its ever-growing permanent
collection. Construction is underway, with completion scheduled for 2010. So, even though the Texas Sports Hall of Fame already offers quite a wide-ranging mix to absorb, amazingly, it will soon be even bigger (and better).