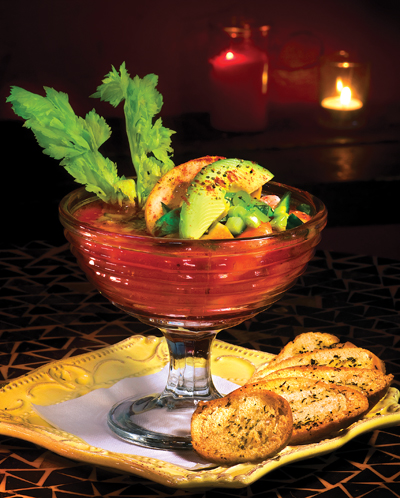 On a perfect October evening in Lubbock, I sit enjoying a glass of viognier while watching members of Chris Crow and the Cat’s Pajamas lug amplifiers and instruments through the garage door at La Diosa Cellars, a romantic bistro-winery.

And yes, the front entrance of the restaurant is indeed a garage door. It doesn’t seem at all out of place at this former auto shop in Lubbock’s Depot District.

La Diosa owner and founder Sylvia McPherson suggests sardinas, a dish of broiled Spanish petite sardines in a roasted garlic-butter sauce, sprinkled with parsley, lemon juice and sherry. But, when it comes time to order, I chicken out, literally, and go with Rita chimichurri chicken, a recent addition to the menu.

I’d chosen La Diosa Cellars Viognier with chicken in mind. The wine’s crispness and hints of apple and pear intensified the peppery balsamic vinaigrette on my salad—a simple combination of spring greens and goat’s-milk feta cheese. In turn, slices of toasted French baguette after bites of salad ensure that the last sip of wine tastes as clean as the first.

The seating at La Diosa—tables of various sizes and shapes surrounded by an even wider assortment of stuffed chairs and sofas—may seem odd until you meet the owner and understand her menu and dining philosophy.

Born in Southern California to a father of Spanish heritage and a mother of Mexican heritage, Sylvia grew up in a food-loving family. “My father and many in his family were incredible cooks, so I learned quite young to appreciate a variety of good foods,” she says.

After college, Sylvia worked as a commercial and residential interior designer, but after 15 years on the job, she needed a new creative outlet. After a short sabbatical, she went into the landscaping business. “Working outside, I had a lot of time to reflect,” she continues. “I started to think about creating a little venue of some sort, maybe a funky gift store, possibly with some spirits.”

She was already looking at space in downtown Lubbock when her brother-in-law suggested that she start a winery. After all, she just happened to be married to one of the region’s best-known winemakers, Kim McPherson. Given her love of Spanish food and Southwestern and Latin American art, a combination bistro, winery, and art gallery seemed a perfect fit.

In January 2004, La Diosa Cellars opened with a one-page menu that reflected a blend of family cooking and recipes Sylvia had gathered on her travels through Europe and South America. “I was the cook when we first started,” she says, “and I still spend a lot of time in the kitchen, especially when we do in-house catering.”

The La Diosa menu has grown to four pages and now features a variety of salads, desserts, and, at lunchtime, Italian, Spanish, and American-style panini. But traditional tapas—small dishes that serve as appetizers or, combined, as a meal—are the restaurant’s mainstay. Small, but certainly not tiny.

Tapa means “top” or “lid” in Spanish. According to legend, the name arose when King Alfonso XII stopped at a famous venta (inn) in Cadiz, where he ordered a cup of sherry. The waiter covered the glass with a slice of cured ham to keep out blowing sand. The king expressed his approval by ordering another sherry “with the same cover.”

“I love that style of eating, of having little plates of food,” says Sylvia. “I just love the warmness of it, and the social aspect. Not only are the smaller portions great for sharing and mixing, but excellent for the health-conscious, as well.”

Small, but certainly not tiny. After the salad and bread, I find my order of Rita chimichurri chicken the right size. I also find it excellent—a marinated mix of herbs, onions, and dried tomatoes on slices of roasted chicken. The condiments have a pleasant bite, but don’t overpower the meat.

After the salad and bread, I find my order of Rita chimichurri chicken the right size. I also find it excellent—a marinated mix of herbs, onions, and dried tomatoes on slices of roasted chicken. The condiments have a pleas-ant bite, but don’t overpower the meat.

Another advantage of small portions is that they leave room for dessert. La Diosa offers a variety of cakes served with berries on top or on the side and chocolate and coffee beverages. The “small portion” philosophy doesn’t apply here. A slice of New York-style cheesecake proves so filling that I reluctantly pass on port and coffee.

Adding to the eclectic environment, portraits of Mexican artist Frida Kahlo hang on the wall behind the bar. Along with great food and wine, Sylvia features a revolving exhibit of different artists’ work here. Also, special occasion baskets, including wine, food, and small gifts, are made to order.

Sylvia calls La Diosa Cellars a “virtual winery,” practically speaking, though her wines are quite real and are sold under the La Diosa label. From a front table, you can look out windows (or through an open garage door) across 17th Street at the former Coca-Cola bottling plant that now houses McPherson Cellars Winery, owned by Sylvia’s husband, Kim.

In addition to the wines he produces for his own winery, Kim produces several to his wife’s specifications. La Diosa Cellars also carries wines from several other Texas wineries. Kim says that he founded McPherson Cellars to honor his father, Dr. Clint (Doc) McPherson, a retired Texas Tech professor widely regarded as one of the pioneers of the Texas wine industry.

After graduating from Texas Tech and completing the enology and viticulture pro–gram at the University of California at Davis, Kim worked for a while in Napa Valley. He returned to Lubbock in 1979 to serve as winemaker at his father’s Llano Estacado Winery. He later worked as winemaker at Cap Rock Winery before starting McPherson Cellars in 2000. His Texas wines have won numerous awards, including two Double Gold Medals at the San Francisco Wine Fair.

“Dad was the first to plant sangiovese in Texas, and I’ve worked hard to get people to understand its potential,” Kim says. “It loves the High Plains sun.”

I’ve grown very fond of McPherson Cellars Viognier. Nowadays, I often choose it over chardonnay and sauvignon blanc. It’s lightly oaked, with hints of apple and citrus. I find it very similar to the viognier Kirn makes for La Diosa Cellars, though slightly crisper. Kim continues to renovate the old Coca-Cola plant as he increases wine production. Tasting-room visitors will soon be able to look out at the Depot District through a long window that once framed the Coke bottling line. Also in the works: a bamboo-lined courtyard with a fountain and patio, an art gallery, and rooms for weddings and other gatherings.

Sylvia says her bistro-winery and her husband’s winery celebrate the merging of families, traditions, and cultures. She chose the name La Diosa, which means “the goddess,” to honor the creative inspiration of her five sisters. Kim McPherson continues the High Plains winemaking tradition founded by his father. Fortunately for us, the McPhersons bring their extended families’ contributions to the culture of the Texas High Plains.