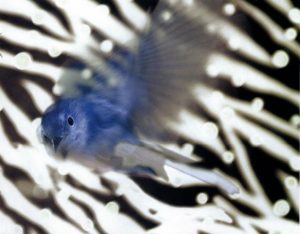 South Texas offers the best birding opportunities in the state. Hundreds of species pass through the region during their seasonal migrations, making South Texas, and the Rio Grande Valley in particular, a great spring and fall destination for birding enthusiasts. But the birding is especially great in winter, as the region hosts dozens of species of birds that take advantage of South Texas’ mild temperatures to overwinter here while waiting for spring.

A year or so ago, I spent a morning photographing some of those birds-about 60 in fact-just outside the city limits of Victoria. As an artist and lifelong birder, I was interested in capturing close-up, intimate portraits of some of the state’s winter birds. But rather than using a telephoto lens to capture the birds against natural backgrounds, I wanted to photograph the birds in-hand and against the patterns of tapestries and other fabrics. To do so, I contacted Brent Ortego, a South Texas wildlife biologist who spends a few days each winter netting, banding, and recording as many hummingbirds and songbirds as he can during the early morning hours. Ortego, a conscientious scientist who keeps the birds’ welfare at the forefront of his mind during banding sessions, agreed to allow me to photograph his newly banded birds just before he released them.

Before dawn on the scheduled morning, Ortego set up dozens of mist nets (delicate, thread-like netting) across several acres. Then, every few minutes he would check the nets, carefully remove any birds caught in them, carry the birds to his on-site documentation station, record the birds’ statistics, and secure a tiny band stamped with a unique number around one of their legs. The process, familiar to research biologists across the globe, is a methodical and cautious one, focused on minimizing handling but maximizing the amount of information gleaned from the brief human/bird encounter. Prior to release, Ortega’s birds would pay a quick visit to my photography stage, set up alongside the documentation station, to “sit” for their portrait before flying away unharmed.

Ortego has gathered an impressive database of avian information over his years of netting and banding, providing naturalists with a more robust understanding of the state’s southern ecosystem. My results are more artistic than scientific. The images in this portfolio, a selection of compositions that
illustrate singular moments as well as layered composites, represent a tiny portion of the number of species that can be found overwintering in South Texas. Along with the art, I’ve included some facts about the birds represented here, followed by prominent locations in South Texas to spot winter hummers and songbirds, and suggestions for birder-friendly places to stay along the way.

The Blue-gray Gnatcatcher is a tiny, elegant bird, averaging around four inches in length, and featuring a beautiful, blue-gray body, a long tail with white edges, and a noticeable white eye ring. The female and immature birds tend to be paler than the male. Males are especially blue during mating season. A year-round resident of coastal Texas and the far southern Rio Grande Valley, the bird flicks its tail from side to side with frequency, a move that may be used to startle its favorite food—small spiders and insects—making them easier to detect. The Gnatcatcher’s call sounds like a squeak-toy squeezed at random and its song often mimics songs of other birds. The Blue-gray Gnatcatcher is the northernmost occurring species of gnatcatcher in North America.

This 2,088-acre federal wildlife preserve along the Rio Grande contains some of the last remaining native thornscrub, resacas, and riparian forests in South Texas and hosts almost 400 species of birds. The refuge has 12 miles of trails. During the winter, the seven-mile Interpretive Drive is closed to traffic but can be explored via a ride on the refuge’s tram. The refuge is also a great place to spot the vibrant Green Jay.

A quiet bed and breakfast specially designed for birding and wildlife enthusiasts, Casa Santa Ana sits on seven acres of landscaped thornscrub and is only a 10-minute walk from the Santa Ana National Wildlife Refuge headquarters. Rooms have private baths, and guests share common areas, including kitchen and laundry facilities.

Cardinal males are brilliant red from tuft to tail, and females, although predominantly brown, have red present in their wings, top crest. and tail. The males maintain their red plumage through molting, thus they are red year round. Both sexes have bright. red-orange bills capable of cracking seeds. They also eat a selection of insects, including beetles, crickets, moths, as well as spiders. Cardinals are aggressive birds and often fight with their own reflections on shiny surfaces. They like shrubby forest borders, ornamental landscaping, thickets, and overgrown fields. Cardinal song is a loud, two-note slide, either upward or downward, sometimes followed by a long trill or a repeated “chirp, chirp, chirp, chirp.” Cardinals are year-round Texans, usually seen singly or in pairs, but in winter, they provide a visual treat in the southern part of the state by flocking there in large numbers.

One of nine World Birding Center sites, Quinta Mazatlan features a Spanish Revival-style mansion that sits on a 20-acre Tamaulipan thornforest sanctuary in downtown McAllen. Built as a private residence in 1935, the mansion was rescued from the wrecking ball by concerned McAllen citizens in 1998. The  city bought the structure and surrounding gardens and, under stewardship of the Parks and Recreation Department. transformed the mansion into an ambassadorial center for environmental education. Quinta’s frequent programs focus on bringing the South Texas community and its surrounding natural world together. The grounds’ extensive manicured gardens are also a good place to spot the Green Parrot. a Tamaulipan interloper from across the border.

This beautiful hummer sports emerald-green upperparts, a buff belly, and a rufous tail, and averages around four-and-a-quarter inches in length. The red, slightly decurved bill is darkest. almost black, on the tip. The male and female are similar but the immature birds of this species are not as flashy. Buff-bellied hummers like woodland edges as well as scrub brush and are often seen buzzing gardens. Although they express a broad vocal repertoire, their typical song sounds like low-pitched, rapid-fire “chits” or electronic snaps. Their breeding territory includes South Texas, yet they are perhaps the least studied hummer occurring in the U.S. Buff-bellies are nectar feeders and will guard feeding locations with aggression, fending off interlopers. One of their favorite meals includes the nectar of the turk’s cap, a native plant with small, deep-red flowers.

The 40-acre wetland preserve lies deep within the Lower Rio Grande Valley and is surrounded by an urban landscape. The site features groomed paths and viewing platforms above freshwater lagoons. A 3.5-acre garden has been planted with flowering natives selected to attract butterflies and hummingbirds. The Interpretive Center has floor- to-ceiling windows for easy wildlife viewing in comfort. The site also offers a good opportunity to spot
overwintering ducks.

Built in 1958, this Mid-century Modern classic on 16 manicured acres is a full-service hotel that includes a restaurant. Tropicana Lounge, and a barber shop.

The Red-winged Blackbird’s abundance doesn’t make it any less spectacular in appearance. The males are a polished, silky-black with brilliant scarlet  wing patches that, on closer look, are trimmed with yellow. The females are often described as dull, oversized sparrows, a description I would have agreed with until I saw one up-close. Red-winged females are splendid, regal birds with their own beauty; the striated sienna-and-burnt-umber plumage is tinged with brown-orange highlights, particularly along the throat. Red-wings like both freshwater and saltwater habitats, fields, feedlots, pastures, and golf courses. They eat insects in summer and seeds in winter, including waste grains. The Red-wings’ unmistakable song is a loud, brassy, three-note dip ending in a liquid spatter. The call is a series of flat “chik-chik” sounds followed by a shrill whistle. Considered highly social birds, Red-wings have been known to roost in great numbers during winter.

Another World Birding Center site, Roma Bluffs encompasses a blend of Texas ebony, anaqua, mesquite, and other tree species along the Rio Grande. Easily accessed from US 83 Business, the site offers an interpretive viewing platform overlooking the scrub canopy and the river below. The Red-winged  Blackbird is a year-round resident here. Also watch for the Altamira Oriole while you’re glassing the treetops.

Located 12 miles south of Roma along US 83 in Rio Grande City, the no-frills La Borde, with its National Historic Register designation, offers seven
simple rooms and a bougainvillea-covered courtyard.

Typically under five-and-a-half inches in length, the Orange-crowned’s plumage is olive-gray along the upper parts and a somewhat faded yellow  underneath. The actual orange crown of its name, a small patch on top of the bird’s head, appears only when the crown feathers stick up, a consequence perhaps of an excited state. The Orange-crowned Warbler species is actually divided into four subspecies, each with a slightly different color, length, molting pattern, and location. Texans will be most familiar with the subspecies they see in transit. usually later in the migratory season, from its boreal-nesting and breeding site in Canada. It dines on insects and spiders, bobbing and flitting amid vegetation at a rapid pace. The Warbler’s call is a high-pitched chirp, and its song consists of a brief trilling that crests and troughs quickly at its ending.

The easternmost World Birding Center site, this 50-acre nature center on the southern tip of the island encompasses the four primary habitats found along Texas coastal waters, including shrub and tree thickets, dune meadows, salt marshes, and tidal flats. Birders have the opportunity to explore all four up-close along boardwalks, in bird blinds, and atop a five-story viewing tower at the Nature Center. It’s also an excellent place to catch a good look at the Brown Pelican.

Just a 20-minute drive from South Padre, the inn sits on 40 private acres and offers seven elegantly appointed rooms along with a lodge available for special events. The grounds include a hiking trail, birding stations, and a 27-acre prairie with a freshwater pond.