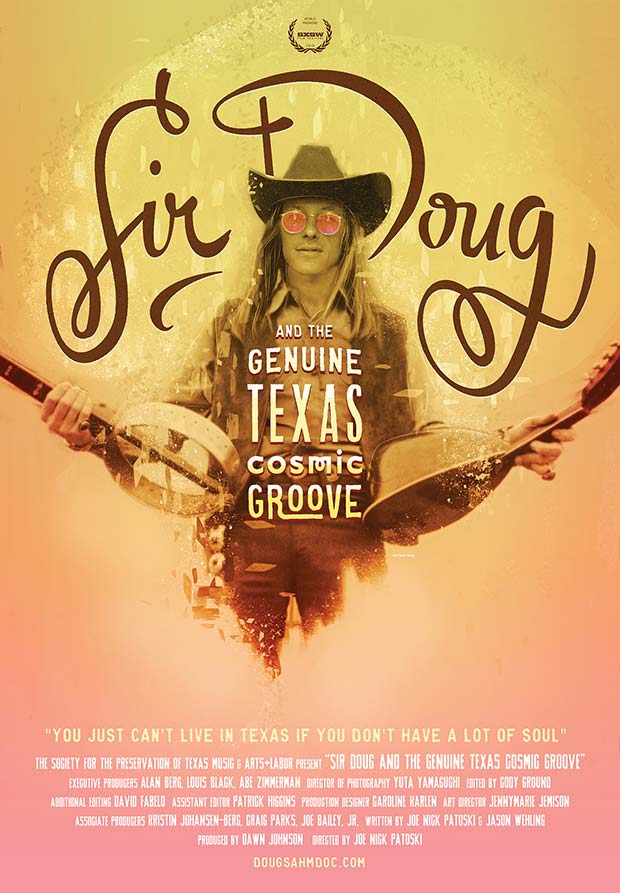 While South by Southwest is known as a petri dish of global alternative culture and innovative thought, some of the conference’s best moments spring from local creativity that grabs the spotlight when the world comes to Austin. One example is the documentary movie about Texas musician Doug Sahm that premiered at this year’s festival.

Sir Doug and the Genuine Texas Cosmic Groove offers a vivid musical account of the life and career of Sahm, a swaggering, uber-talented, alpha-dog musician who helped define the sound of Texas music from the 1950s to the 1990s. The film—along with a lively and nostalgic March 21st Sahm tribute concert that featured performances by Steve Earle, Roy Head, Joe “King” Carrasco, Bill Kirchen, Augie Meyers, and others—is rekindling interest in Sahm and his wide-ranging influence on roots rock ‘n’ roll.

If you missed the film during SXSW, another Texas screening is coming up in Sahm’s hometown of San Antonio: The San Antonio Book Festival will show Sir Doug and the Genuine Texas Cosmic Groove at 1 p.m. Saturday, April 11, at the Empire Theater. Doors open at 12:30, and the event is free and open to the public. Joe Nick Patoski, the veteran Texas music journalist who directed the film, will be on hand for a discussion after the screening, along with Hector Saldaña, senior staff writer and music columnist at the San Antonio Express-News, and Louis Black, senior director of SXSW and co-founder of the Austin Chronicle. Patoski says the film is also scheduled to screen at CineMarfa, a film festival in Marfa taking place May 7-10.

Born in San Antonio, Sahm was a musical prodigy who was good enough to be invited to play pedal-steel guitar at a Hank Williams performance when Sahm was only 11—a show that turned out to be Williams’ last. Sahm went on to found the Sir Douglas Quintet—best known for the 1965 hit “She’s About a Mover”—and lead various bands through the ’60s, ’70s, and ’80s that melded the sounds of rhythm and blues, rock, country, and conjunto music. He was a key figure in the Austin country-roots rock scene of the 1970s and later co-founded the hit Tex-Mex band the Texas Tornadoes. In 1999, he passed away at age 58.

You don’t have to be familiar with Sahm or his music, or even be a student of Texas music, to enjoy the documentary. In the midst of the hustle and bustle of SXSW, Patoski took a moment to explain why:

“This is the biopic of the person to me who was the greatest single individual musician to play popular music in the state, mainly because he could play all our indigenous styles, and Texas music is a vast, complex beast, from Western swing, country and western, rhythm and blues, jump blues, Tex-Mex, Tejano, conjunto, and swamp pop. Doug was the one person who could play all of those indigenous styles and play each one of those styles authentically. And Texas music and Texas culture are nothing if not authentic.

“I’m glad this has happened this long, 15 years, after [Doug] died, because normally I’d try to do a book. The one thing I realized with someone who’s been gone that long is that you can’t hear music with words. You gotta hear music, you gotta see him, you gotta hear him talk and operate. The only way you can do that is with film. So reluctantly, belatedly, I’ve come around to the most powerful storytelling medium there is, and that’s film. And so this is a gift.

“If you wonder why San Antonio is so much like New Orleans, one of these few cities in the United States that has a really distinctive and a rich culture, if you’ve ever wondered how Austin got to be Austin, and if you’ve ever wondered about all these different sounds, what Texas music sounds like, Doug Sahm and this film are the answer to all three of those questions. That’s what I hope to accomplish.”

Check out a trailer for the documentary here: