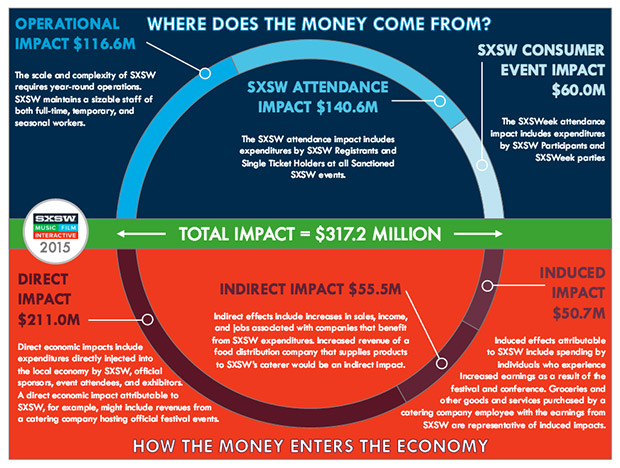 If anyone ever wondered if South by Southwest has any staying power, the answer is a resounding “Yes!” each year  as the financial impact is revealed. For 2015, its 29th year, we’re talking about a $317.2 million impact to the City of Austin.

Paul Gaugin’s Nafea Faa Ipoipo? or When Will You Marry? painting recently sold for $300 million. There’s change to spare!

This $317 million megayacht might buy you a lot of new friends, too. Everyone’s going to want a ride.

For a mere $100 million, you could have Michael Jackson’s Neverland Ranch. With another $217.2 million burning a hole in your pocket, you could scoop up George Clooney’s Italian estate, too.

SXSW remains the single most profitable event for the city’s hospitality industry. Converging on Austin are fans and new bands, new music, veteran and first-time filmmakers and actors, interactive movers and shakers, gamers galore and more coming from 85 foreign countries.

The core of its success is the amazing energy generated by 139,525 registrants and ticket holders soaking in 13 days of industry conferences, a 4-day trade show, 8 exhibitions, a 6-night music festival featuring more than 2,275 bands, and a 9-day film festival with more than 400 screenings. Several free-to-the-public events, including 3 nights of concerts along Lady Bird Lake, drew in and additional 171,200 participants.

On Tuesday, SXSW revealed the results of a comprehensive economic study on Tuesday.

“SXSW is a testament to the creative and collaborative culture that has become synonymous with Austin,” says Michael W. Rollins, CCE, President of the Austin Chamber of Commerce.  “It remains a key economic driver that supports our local economy and innovation community well after the main event concludes.”

SXSW Executive Director Mike Shea says, “SXSW’s goal is to gather the world’s creative community under one tent, but as a result over 30 years we helped spark a hospitality industry boom that created countless Austin jobs from construction to transportation to dining and more. The lodging industry alone currently employs more than 75,000 people.”

Oh, yes. All those participants coming from out of town helped fill up 13,300 hotel rooms for an all-time high of a 5-night average, totalling 60,254 room nights.

There’s a marketing dollar value in all the media coverage and exposure Austin receives during SXSW. If SXSW had to pay ad time for all its exposure, the cost would exceed more than $90.6 million for all the print, broadcast and online publications coverage.  In 2015 alone, SXSW—and by extension, Austin, Texas—reached more than 80.1 billion broadcast, print, and online impressions.

Looks like SXSW is getting better with age. It’s 30th should be another soaring success.