The Prize of Public Art 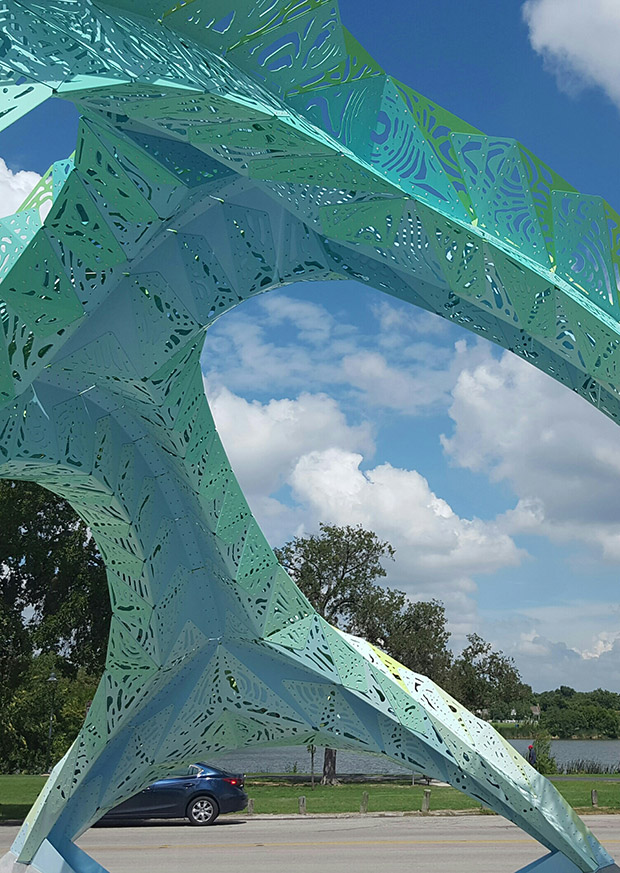 It’s always worthwhile to make your way to one of the state’s illustrious art museums with holdings that rival collections across the globe. But keep your eyes open for the bonus art that you happen upon – public art.

Read about French designer/architecht Marc Fornes and his works, including his first creation in the United States – The Spineway in San Antonio.

While driving through a San Antonio neighborhood, near Woodlawn Lake, recently, I was a little turned around and following my GPS to get me on my way. But I had to turn off the GPS and turn the car around to make time for the unexpected teal and lime green, 20-foot dome-like structure that was in my rear-view mirror.

I needed a closer look. I walked around it and under it. I inspected it, and admired, through the perforated openings, the light of the beautiful sky over Woodlawn Lake Park. 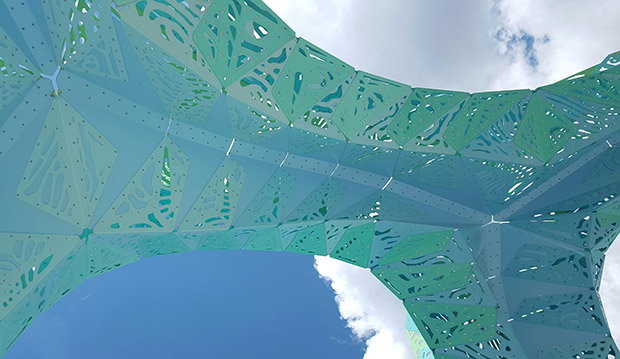 The way it snuck up on me, it seemed like an unlikely location – not necessarily in a place highly frequented by travelers and tourists. But that warmed my heart to know this was intended to be public art for the locals, in a century-old park frequented by locals.

The Spineway, as it is called, is the first permanent U.S. installation by French architect Marc Fornes, who uses more than 1,000 perforated aluminum shingles for his creation. Dedicated in October 2015, it’s a conceptual bridge that reflects the different directions people come from to use the park. It’s location on S. Josephine Tobin Drive also serves as a visual marker that connects Woodlawn Lake Park to historic St. Mary’s University and the Cincinnati Avenue corridor.

In a statement for the October 2015 dedication, Felix N Padrón, director of the city’s Department for Culture & Creative Development said, “Marc Fornes is a dynamic and well-respected artist known throughout the world, and we are honored that San Antonio is the home of Marc’s first outdoor public art installation in the country,” 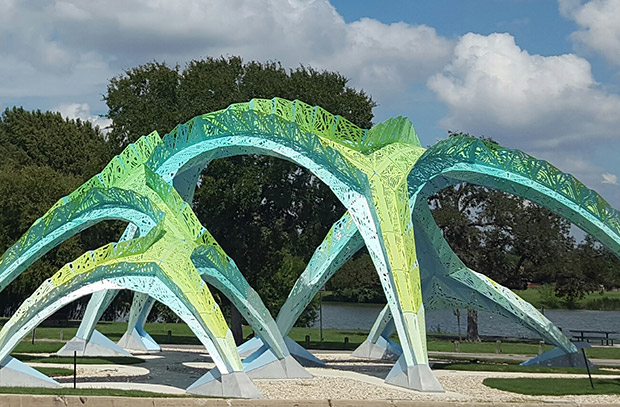 “His sculpture adds a new dynamic to Woodlawn Lake Park, while integrating the surroundings and maintaining the character of the park.” The sculpture was funded through the 2012 bond public art project.

“Woodlawn Lake Park is one of the many gems, not just for District 7, but for the entire city,” said District 7 Councilman Cris Medina. “Public art enriches the quality of life of the community and adds vitality to our neighborhoods. This new sculpture by Marc Fornes will certainly do that and I am excited that it is now a fixture at Woodlawn Lake Park.”

Although I saw teal and lime green, the sculpture, which is illuminated at night, is actually painted in 22 colors, has 986 pieces, and was assembled with 20,000 rivets.

From the September 2016 issue