Where to Celebrate Mardi Gras 2018 in Texas 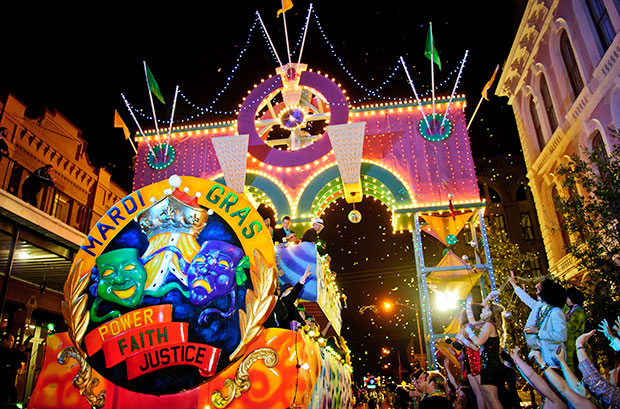 Texans will have their own slice of N’awlins at Mardi Gras festivities across the state.

Galveston: Feb. 2-13
The grande dame of Texas Mardi Gras celebrations attracts more than 300,000 people each year to dance in the streets of the city’s historic downtown.

Austin: Feb. 10
In Brazil, a weeklong party characterizes Carnaval, the Mardi Gras of the southern hemisphere. But for more than 40 years, the party has been consolidated to a single day in Austin—now lauded as the largest indoor Brazilian Carnaval in the world. The experience is powered by the infectiously danceable pulse of samba drums, enrapturing performers, a Texas-size parade of exotic costumes, and the wild euphoria of thousands of attendees.

Bandera: Feb. 1-3
Claim a spot on Main Street for the Cowboy Mardi Gras parade on Saturday—featuring floats, horses, cowboys, feathers, masks and plenty of beads. Home base is at 11th Street Cowboy Bar, where you can enjoy Cajun food, a costume contest, a gumbo cook-off, and live Cajun and country music.

McKinney: Feb. 11
The 16th annual event promises to be a howling hoot. In past years, more than 250 dogs participated in the parade alongside more than 4,500 spectators in awe of costumes, creatures, and creativity. The parade is patterned after the Mystic Krewe of Barkus in New Orleans, which was established to help abused and abandoned canines.

Jefferson: Feb. 9-11
One of Texas’ oldest towns resurrected its annual celebration in 1990 and offers a slew of parades—including a children’s parade, a motorcycle parade and a pet parade—plus live entertainment, food, a carnival area and more.

Find details for these and more Mardi Gras events in our events calendar before Fat Tuesday arrives: