From Nacogdoches to El Paso, here are some of the best independent outdoor shops in Texas. 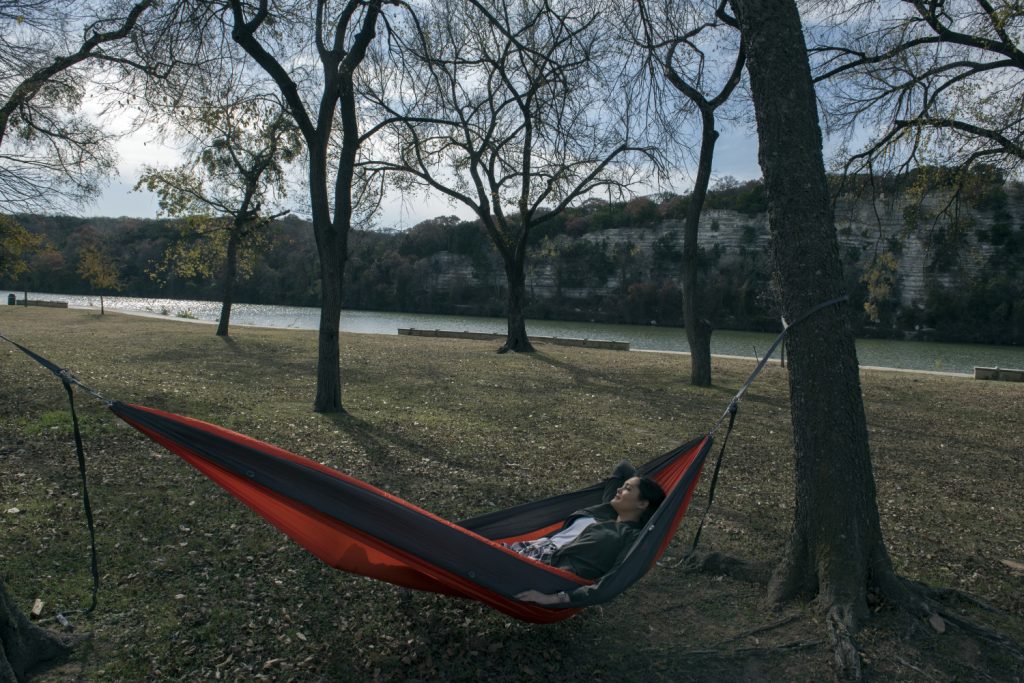 A woman relaxes in a hammock at Brazos Park East in Waco. Photo by Kevin B. Stillman.

If you want the best gear—whether it’s clothing, tents or something else—you don’t have to go to a large chain store to get what you need. Across the state, local outdoor shops provide incredible selection, with many having big-time brands such as Patagonia and North Face. So whether you are preparing for your first excursion in the woods or your 100th, here are some places to stock up before you head out on your adventure.

The main focus Austin Canoe & Kayak, also known as ACK, is obviously canoes and kayaks, but the company’s five stores throughout the state offer camping gear, fishing equipment, and more.

Backwoods, originally founded in 1973, has four physical locations throughout the Great Plains: Oklahoma City, Omaha, Tulsa, and Fort Worth. Part of its brand is Backwoods Adventures, a travel company that organizes trips across the globe.

With two locations in El Paso (although the location on North Yarbrough is currently closed due to COVID-19), Black Flag Outfitters has Ray-Ban and Oakley sunglasses in addition to Patagonia apparel and more.

With its selection of kayaks on the top of its catalog, Happy Trails Outfitters also has a solid selection of apparel, gear, and more.

Good Sports originally started as an athletic store in 1982 before the transition to an outdoor gear shop 10 years later. There are currently two locations. The main store is located on Interstate 10, while the outlet store is located on Beckwith Boulevard.

Gossamer Gear’s expertise is in backpacking, helping people for over 20 years find the best backpack for them.

At the end of July, 1800Gear changed its name to GRITR Outdoors. The store has all different kinds of apparel and more in its stock, including home and gardening and motorcycle supplies.

If you need fly fishing gear for your camping trip, this is a great place to go to. With its fair share of fly fishing equipment to go with its stock of camping supplies, Mountain Hideaway has a very good selection.

Mountain Sports is closing in on 50 years serving the DFW metroplex. One thing that sets it apart is its Ski and Snowboard Service Center, where mini tune-ups cost only $35.00.

The outdoor clothing store has the same owners since opening in 1977 and has many of the mainstream brands including Patagonia, Ugg, North Face, and Hydro Flask.

Although focused on skiing, Ski Skeller Sports also has camping and backpacking products in its stocks.

SlimPickins Outfitters in Stephenville not only has some of the best brands in the industry, but it’s own in-house brand, SP Provisions.

This Fort Worth store specializes in hunting and fishing.

The Bear Mountain has been a Waco staple for over a decade. In addition to an outdoor shop that features brands such as North Face, Patagonia, and Birkenstock, the Bear Mountain also has a bike shop.

The Bear Mountain of Waco opened Overlanders in 2012 in College Station, which was later bought by current owners Linda and Randy Scott. The store merged with Legacy Ace Hardware and Gifts in 2018.

The Budaful Hiker started in Buda, and the owners later opened a second store in Wimberley. The store usually holds three community hikes every week on Tuesday, Thursday, and Saturday mornings.

Whole Earth Provision Co. is based on the Whole Earth Catalog, a magazine from the late 1960s and 1970s that provided information about tools, perspectives on the world, and more. The first store was found in Austin, and it has now expanded to six locations in four cities—Austin, Dallas, Houston, and San Antonio.

Zion Gear adds a little bit of a twist to the usual outdoor gear shop, focusing on supplying customers with items that might be needed in an emergency or after a disaster. Instead of having a large collection of clothes, Zion Gear has food, radios, medical and survival kits and more.