7 Ways to Inspire a Love of Art in Your Kids

The game is on at these public art installations in Austin 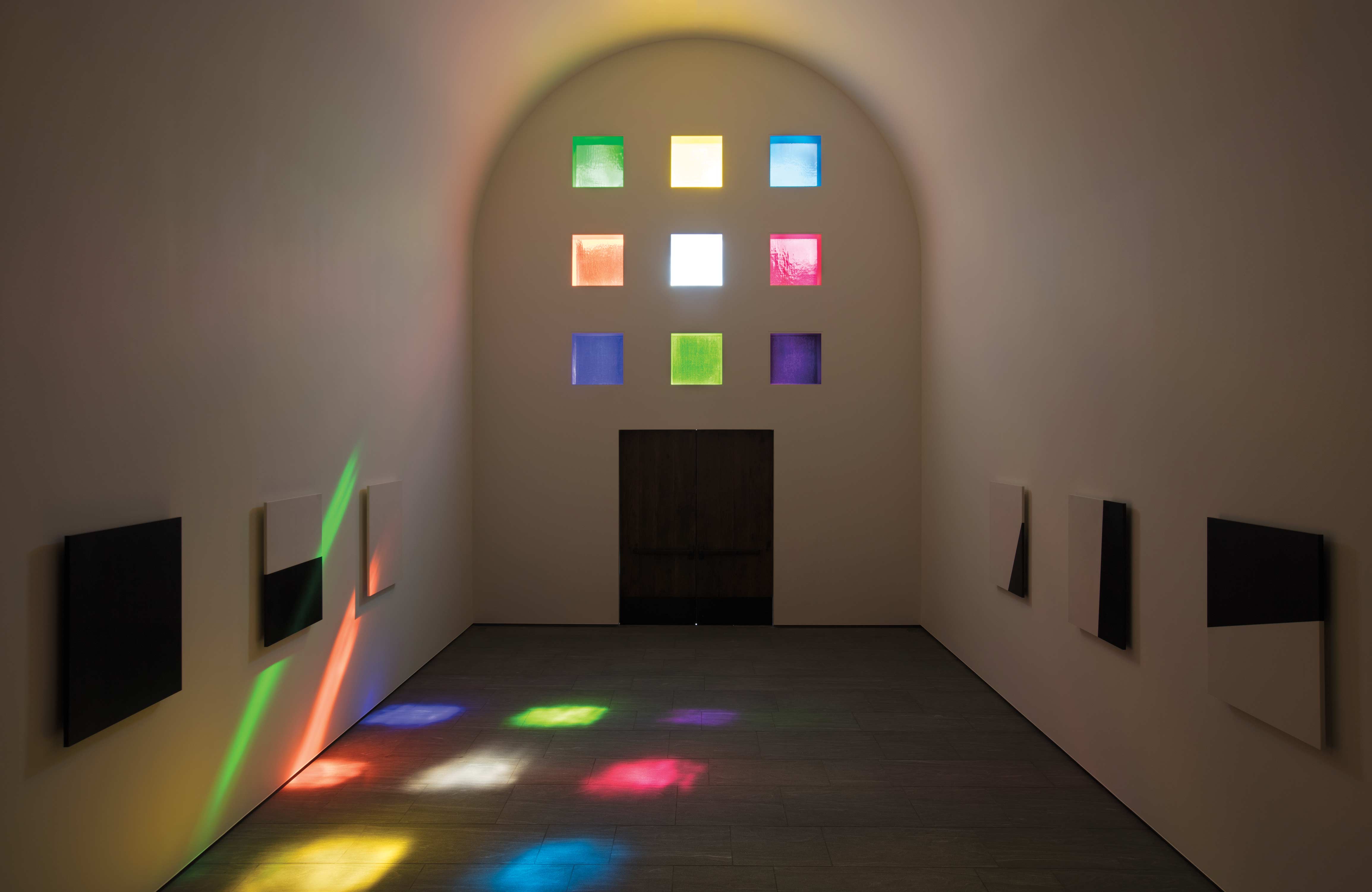 As the sun shifts, colors travel across the floor and white interior walls of Austin, the last work by renowned artist Ellsworth Kelly. Photo courtesy Blanton Museum of Art, The University of Texas at Austin

Sometimes it’s all in the packaging: Telling my 8- and 10-year-old children we’re going to spend an entire day looking at art isn’t likely to make their hearts leap—that would require a water slide or afternoon at their favorite arcade. But we’re lucky enough to be surrounded by dazzling, funky, and truly significant works of public art in Austin, available to anyone who takes the time to view them.

The Color Inside
In the UT Student Activity Center at 2201 Speedway.
To experience a light sequence at sunset, make a reservation at turrell.utexas.edu.

Forever Bicycles
74 Trinity St. on the Waller Delta where Waller Creek flows into Lady Bird Lake, are on public display.

Because these pieces reflect the diverse and quirky culture of our city, I was determined to create a window to take them in as a family. But I needed to get crafty. I decided to turn our trek into an art-inspired “scavenger hunt,” complete with questions, special notebooks and pens, and—here’s the key detail—a prize for full participation. Suddenly, my kids were all in.

Since I was the chauffeur and orchestrator of this escapade, our quest had certain parameters. I drove us to the general area, and sometimes finding the art was the goal; other times there were questions about the piece that made them look a bit deeper into its meaning. We set out early on a recent Thursday, following a tour framed around the following clues.

Find a window to the sky and describe its color.

Even though we live close to The University of Texas at Austin campus, I’d never been to the Student Activity Center, home of The Color Inside, a “Skyspace” by internationally acclaimed artist James Turrell. After a few helpful students pointed us to the building, then the elevators, and finally the door that led to the rooftop garden, I announced we were “very warm” and let the kids discover the door to the small, round room with a circular opening in the ceiling called an oculus. We took on a seat to look up through the portal that creates a simple but powerful frame that intensifies perceptions of color. “Light early blue speckled with thick floaty streamers of bright white thin clouds,” my daughter wrote. “Very calm.” 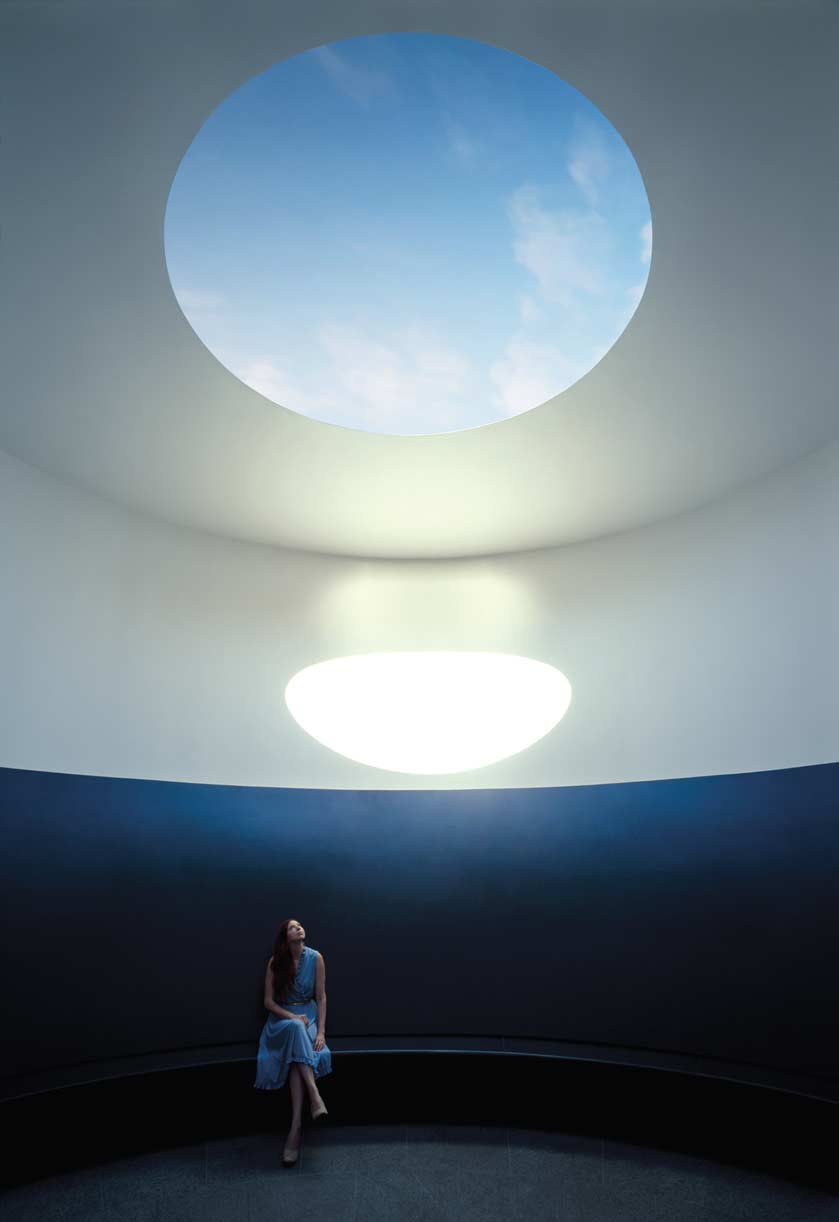 Our next stop was another study of color and light. Often referred to as the “Kelly Chapel at the Blanton,” Austin is the last work by renowned American artist Ellsworth Kelly. (In 2015, the artist gave the museum the design concept for the stone structure with luminous glass windows, which was completed in 2018, after his death.) Meant as a space for joy and contemplation, the interior reveals a kaleidoscope of colored glass windows arranged in three different designs: “color grid,” “starburst,” and “tumbling squares.” As the sun shifts, reflections of the different hues travel across the room’s white walls. Asking the kids to count the squares was a basic but effective way to encourage them to contemplate the space, and how the position of the sun and intensity of light affect the colors. 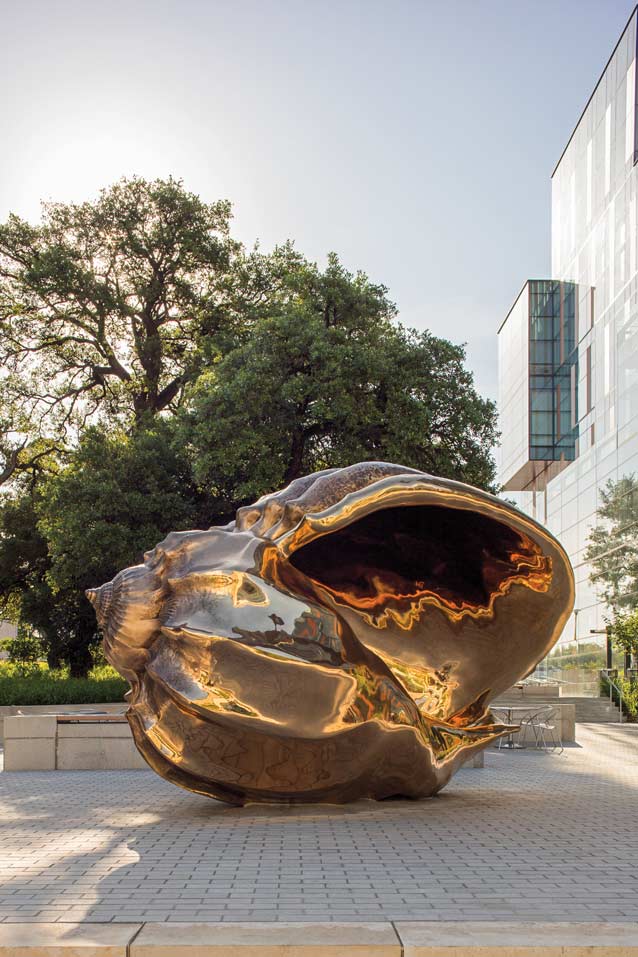 Spiral of the Galaxy is a giant conch shell on display at Dell Medical School. Photo: Paul Bardagjy/courtesy of Landmarks, The University of Texas at Austin

Where did the golden shell come from?

Perhaps my imagination got carried away. Initially, I told my kids that someone had “stolen a treasure from Poseidon, the god of the sea, and they needed to find it!” But it’s difficult not to notice Spiral of the Galaxy, a giant, gleaming, golden conch shell created by British artist Marc Quinn and unveiled at Dell Medical School in 2016.

Determined to experience our city’s art as a family, I decided to turn our trek into an art-inspired scavenger hunt.

But after having their own experience interacting with the shell—feeling its smooth surfaces and actually climbing inside—they chose to create their own narrative. “I’d rather imagine where it came from,” my daughter said, before writing down an impromptu mermaid tale.

Next, we followed the sound of music, or so I imagined, to the corner of East 11th and Waller streets to John Yancey’s vibrant Rhapsody Mosaic Mural. Yancey, an associate chairman and professor of art at the University of Texas, designed the colorful tile mural to reflect east Austin’s rich African American history and the jazz and blues that drifted from venues like the Victory Grill, where legends such as Etta James and B.B. King performed in the 1940s and ’50s.

I wanted the kids to understand a history that’s no longer visible in the city’s rapid development. It was easy for them to spot two saxophones and a trumpet, but the fourth instrument—the voice emanating from the open mouth of a songstress—took a bit more thought. 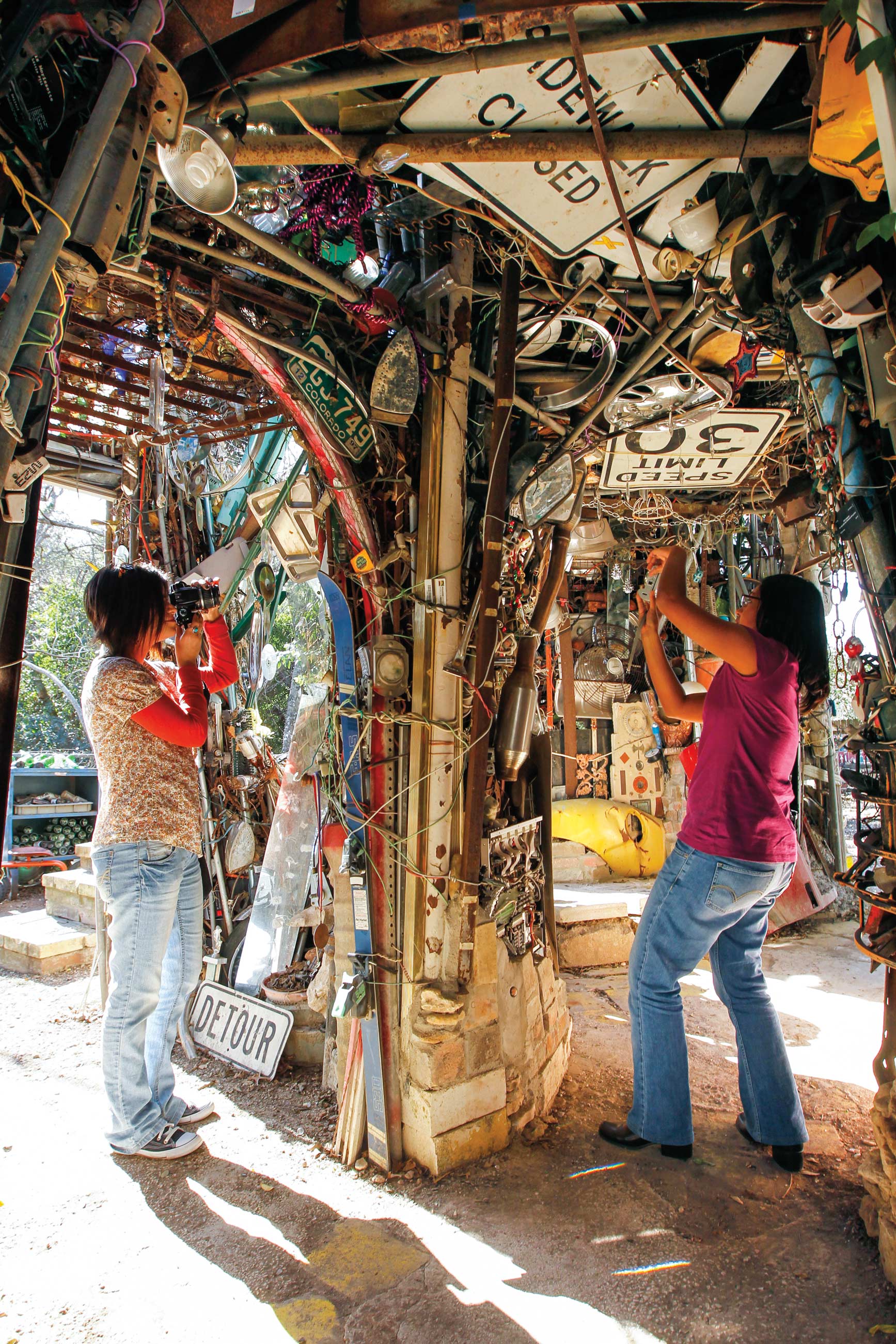 A visit to the Cathedral of Junk. Photo: Erich Schlegel

Choose three items that delight you.

I’d heard about the Cathedral of Junk—Vince Hannemann’s rambling grotto of found objects—for years, but I’d never made the trek to south Austin to see it. Vaguely arranged by color, his creation is so jam-packed with stuff—tennis rackets, empty bottles, bike tires, license plates, and jewelry—that it didn’t take my son long to say, “I’m done!” Delighted by the rough edges, funk, and playscape approach of climbing through the installation, he chose a snowman ornament, a plastic hippo, and small bust of Mozart.

My son was delighted by the rough edges, funk, and playscape approach of climbing through the installation.

It’s got plenty of wheels, but you can’t ride it.

After scoring a downtown parking spot, we ambled to the Waller Delta to behold Forever Bicycles by Chinese artist Ai Weiwei. Created in 2014, the two-site exhibition is part of The Contemporary Austin’s Museum Without Walls, an ongoing collaboration with the Waller Creek Conservancy, which places art throughout our community. Forever Bicycles, a reference to a brand of Chinese bikes, consists of more than 1,200 bicycles transformed into a playful, spectacular monument with an archway underneath that gives viewers another “forever,” the optical effect of looking up into the seemingly infinite tower of wheels, frames, and spokes.

The car isn’t running, but the radio is.

Famous for songs like “Amarillo Highway,” the musician and artist Terry Allen has devoted much of his work to America’s romance with automobiles and the open road—particularly their promise of adventure and escape. That nostalgia is embodied in Road Angel, a bronze cast of a 1953 Chevrolet coupe. The green-tinged car, balanced on three wheels and nestled among the trees at Laguna Gloria, isn’t going anywhere soon, which makes its ongoing audio archive—songs and oral histories by musicians, artists, and writers that seem to emanate from the car’s radio—all the more stirring and eerie. The piece, like Allen’s music, transports us to the road—where the search for beauty can begin anew.