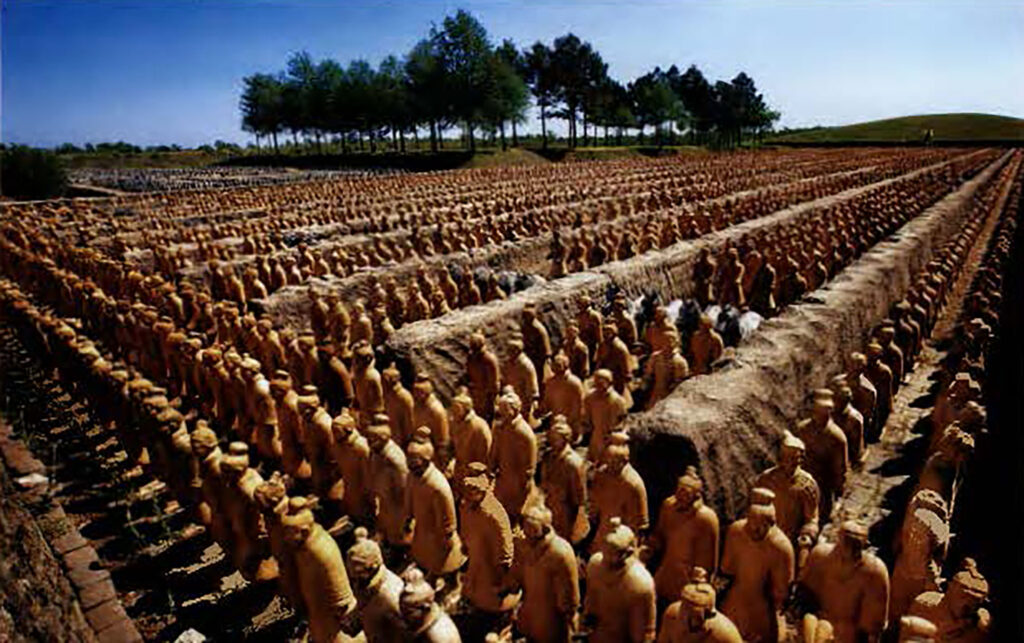 This Katy attraction features 6,000 1/2 scale replicas of the Terra Cotta Warriors that stand in the Chinese city of Xi’an.

To get a sense of the scope and grandeur of the 180-acre Forbidden City in Beijing or the 8,000-plus Terra Cotta Warriors standing ready in their burial pits in Xi’an, you can either spend a lot of time on an airplane—paying $6 for a bland ham sandwich and worrying about deep vein thrombosis—or you can drive to Katy and visit the 40-acre Forbidden Gardens. On a recent sunny weekend, I chose the latter.

I pulled into a quiet parking lot, strolled across a moat via a stately, red bridge with ornate latticework, and bought my ticket to China; no visa required. I had been fortunate to visit the real Forbidden City in Beijing about six months before, so this was a chance to step back into that experience without the stinging eyes and scratchy throat from the appalling Beijing air pollution.

Tinkling chimes in the central courtyard lent a peaceful vibe during the short wait before the next guided tour. The compound is built to resemble the original Forbidden City, with swooping, pagoda-style roofs but minus the giant portrait of Chairman Mao Zedong, founder of the People’s Republic of China, that hangs on the exterior. Instead, two large white statues of Chinese guardian lions (Fu dogs) keep an eye on the entrance.

Our tour guide, longtime employee Kim Stevens, appeared, and the dozen people in my group began an hour-long tour that would explore thousands of years of Chinese history. Stevens kept us moving along at a brisk pace as she shared anecdotes and information about various architectural periods, emperors, battles, and tools of warfare.

First, we studied the 1/3-scale replicas of the famous Terra Cotta Warriors, an “army” commissioned some 2,000 years ago by Emperor Qin Shi Huang to protect him in the afterlife. Six thousand of these replicas are arranged in battle formation east of the courtyard. In a “willing suspension of disbelief.” I tuned out the backyard fences of a nearby housing development and marveled at the detail of the clay faces, hairstyles,  and uniforms.

Stevens regaled us with stories of the emperor whose combat skills and diplomatic prowess unified most of China for the first time. The emperor championed massive public works projects, but he also had some odd personality quirks and paranoia. For example, he was focused on obtaining immortality, continually looked for elixirs of life, and had maniacal health concerns. One of the wags in the tour group commented that he sounded as if he were “a little off the deep end-like a Chinese Howard Hughes.”

At the battlefield exhibit room, Stevens told us about the origins and uses of various weapons and explained how kites, drums, and gongs were used by the emperor’s troops for communicating on the battlefield. During daylight hours, the kites and other colorful flags and banners gave the troops a visual reference point across large areas, and loud drums and gongs signaled when to advance against the enemy and when to stop or move to the left or right As we left the room, Stevens gave one of the gongs a satisfying “thwack,” which was a big hit with the children in our group.

We then stepped out of the exhibit room into a large, covered pavilion that protects the other major Forbidden Gardens highlight: a 1/20-scale model of Beijing’s Forbidden City—the Chinese royal home for 500 years, built in the early 1400s. It was impressive to see such an enormous  landmark—a UNESCO World Heritage site—completely re-created here in Katy.

I can tell you that a walk around the Texas version is a lot less taxing than tromping through multiple, gargantuan Forbidden City courtyards in Beijing, and it inspired me to start wondering how soon I could return to China to see the real thing.

Soon, we wandered past Lilliputian renderings of the Hall of Supreme Harmony, Palace of Heavenly Purity, Hall of Literary Glory, and more teensy gardens, courtyards, and palaces than you could shake a royal, silver-tipped chopstick at. There was a separate section with a 1/20 scale re-creation of what we call the Summer Palace, known to Chinese royals as the Calming of the Heart Lodge.

The tour concluded with a stroll past an indoor scale model of the Chinese city of Suzhou, best known for its beautiful gardens, canals, and pagodas. The model is lovingly rendered, but it needs some cleaning and better signage to explain the various features.

One highlight of the site is a small room with architectural models that illustrate Chinese building techniques. There is a two-foot-tall Hall of Supreme Harmony that is cut in half to show how the buildings were constructed with-out nails or glue. It’s the most lavish set of Lincoln Logs I’ve ever seen.

Stevens said that it’s a constant battle to keep the tiny, painted buildings and stalwart Warriors preserved and repaired. The upkeep is labor-intensive, partially because the models are fragile. ”We can only use toothbrushes and dish soap to clean them,” she said.

Before she came to work here in 2003, Kim Stevens was typical of many who have no idea that Forbidden Gardens sits just off the interstate among strip malls and concrete. She’s now added world history to her college psychology studies, thanks to this small peek at China. Don’t be surprised if visiting this intriguing site has a similar effect on you.