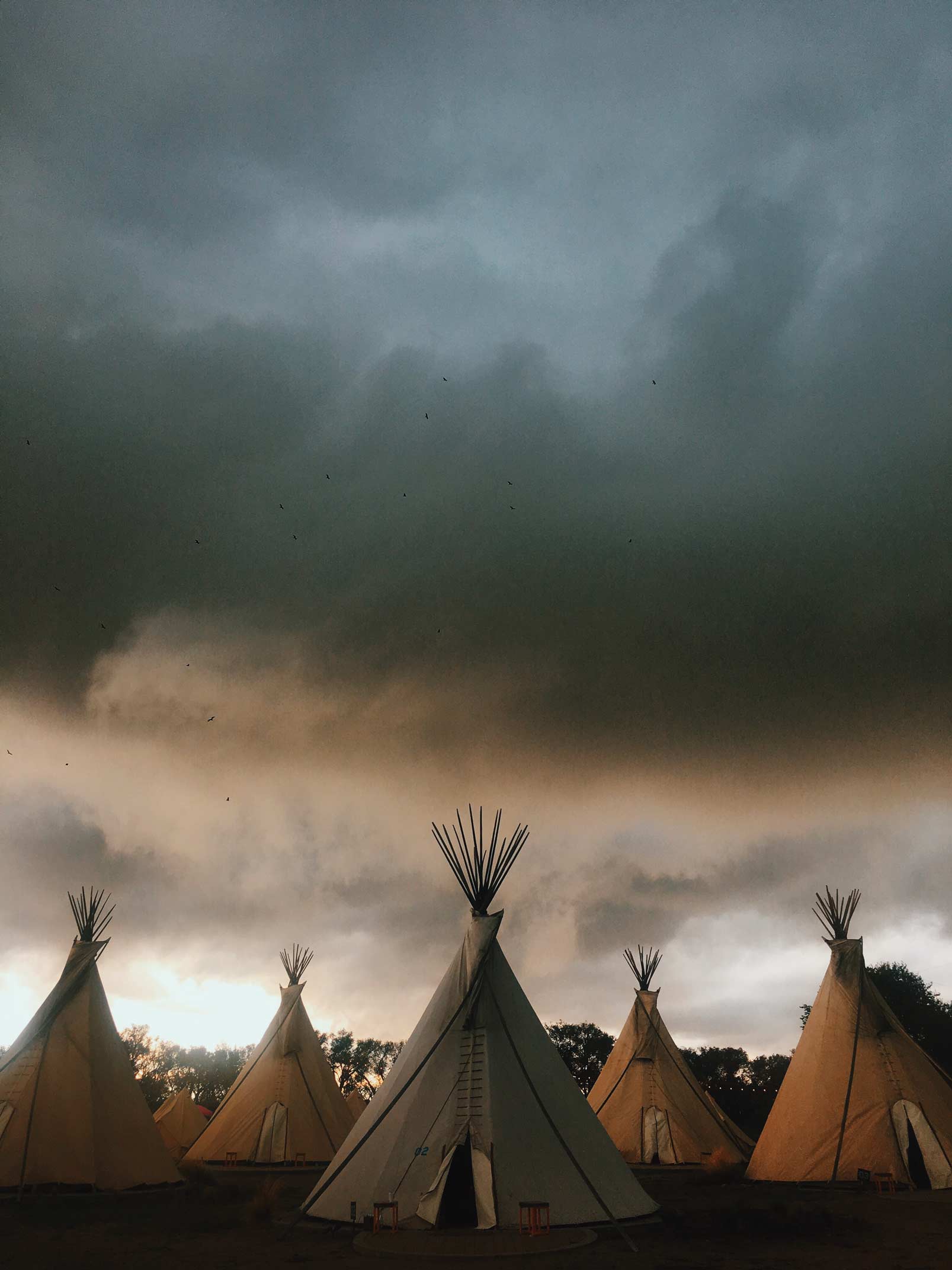 Arriving in Marfa, the high-desert ranching town with a lofty reputation as a mecca for modern art, first-time visitors sometimes find themselves wandering empty streets and wondering, “What’d I miss?” Those who come to love this creative outpost understand that it takes patience to get a feel for the town’s enigmatic allure. For three days each fall, however, the stylish counter-cultural side of Marfa is on full display at the Trans-Pecos Festival of Music + Love.

Hosted by El Cosmico, a campground lodging a few blocks from the town center, the Trans-Pecos Festival mixes three nights of live music with an intriguing lineup of daytime workshops and activities, such as crafting herbal tinctures and a sandlot baseball game. Amid the organized events, flashes of curiosity frame the experience: a French poodle in a glowing collar chasing a flashing ball after dark; a man wearing a Lone Star Speedo and cowboy boots tending a pig roast; and festival-goers soaking in Dutch hot tubs just yards from the concert stage.

The setting of the Trans-Pecos Festival is central to its atmosphere. Part of Austin hotelier Liz Lambert’s Bunkhouse Group collection of hip lodgings, El Cosmico hosts visitors year-round with renovated vintage trailers, teepees, yurts, and a trendy mercantile. Lambert started the festival in 2005, four years before El Cosmico opened, partly to get a sense for how people would use the land, says Isadora McKeon, a former Bunkhouse employee who was involved in producing early editions of the festival. During Trans-Pecos, the grounds fill in with a music stage, food trucks, vendor booths, bars, a wine lodge, a coffee shop, a Ferris wheel, and hundreds of camping tents—all under the endlessly dramatic Chihuahuan Desert sky. 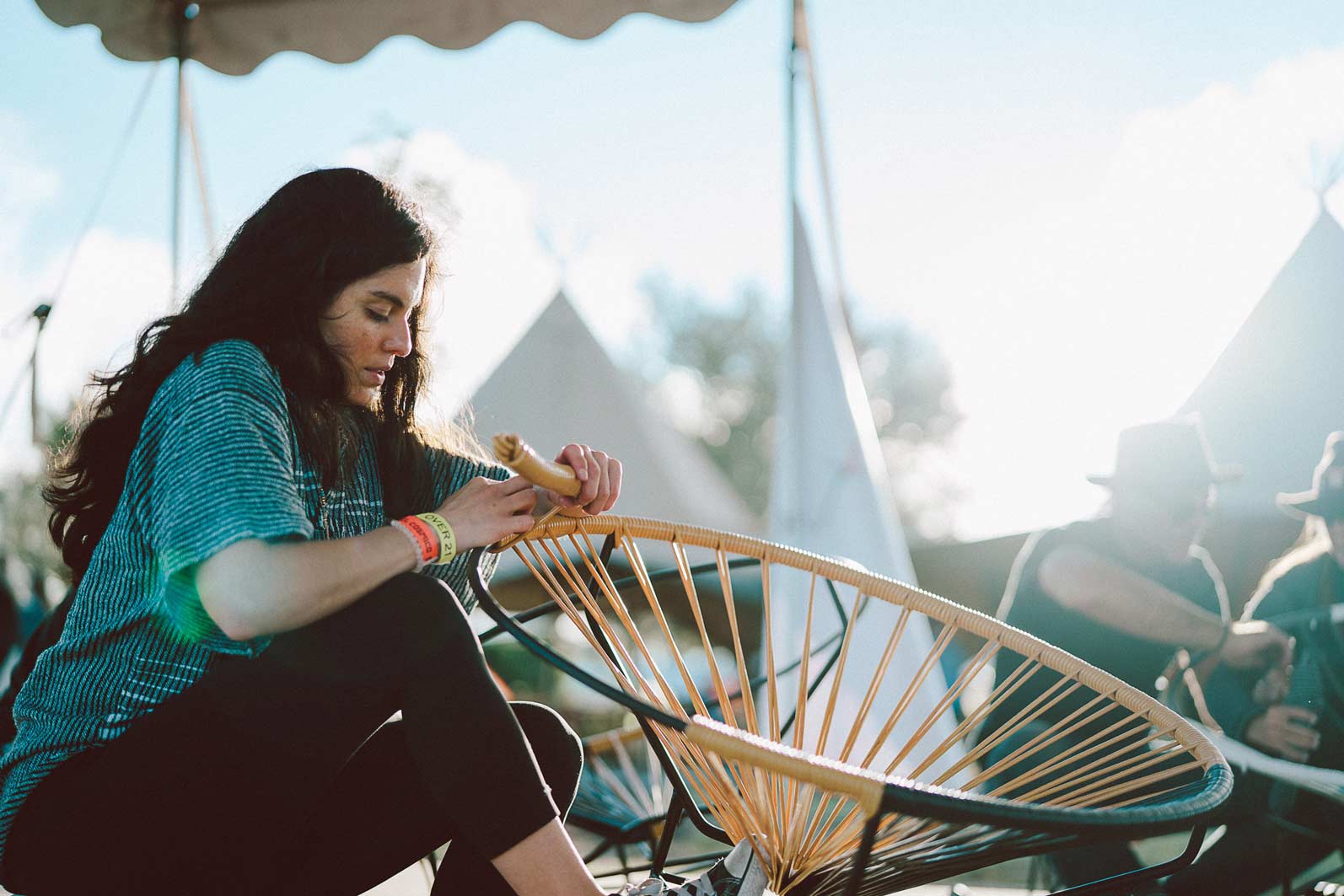 “There’s a unique pull to Marfa. A lot of people come from all over the place to experience Marfa, and I see that in this festival as well,” says Sage Keith, a local who’s originally from nearby Alpine. During last year’s Trans-Pecos Fest, Keith worked the outdoor booking desk for a festival spa called El Cosmetico, which offers massages, facials, and acupuncture in canvas tents. “It’s not like it’s easy to get here,” she adds. “You can meet some of the most interesting people, and they really take some effort to get out here, so you know they want to be here. They have a purpose to be here.” 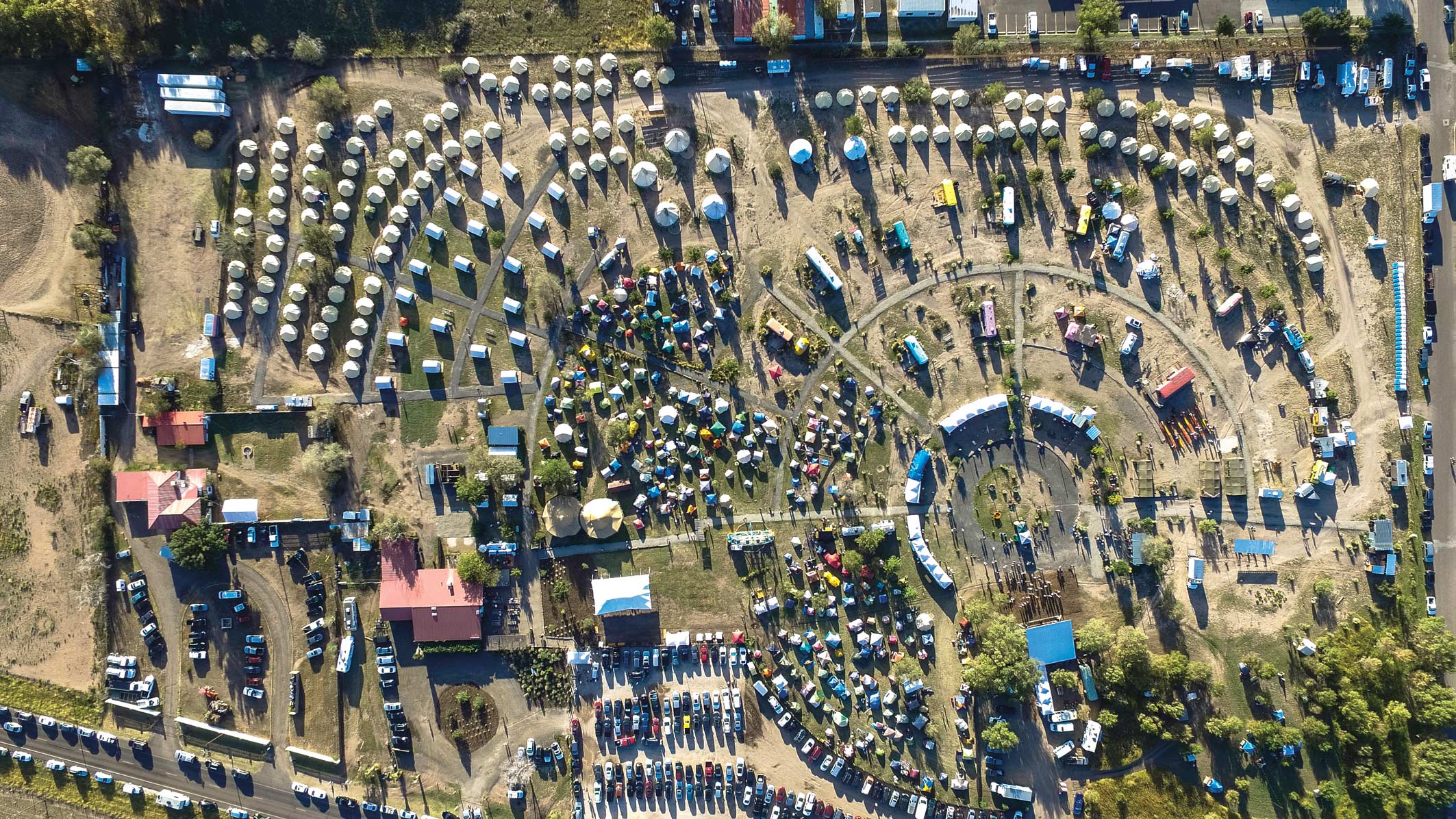 For most of Trans-Pecos’ roughly 2,000 attendees, the main draw is the concerts, which feature six bands per night on the main stage, an artful wooden structure flanked by ash trees. Though the dirt-floored concert grounds fill up during popular acts, the crowd doesn’t feel stifling, and there’s room in the back for lawn chairs. The bands tend to veer to the indie rock and Americana side of the musical spectrum. Over the years, headliners have included Wilco, Lee Ann Womack, the Old 97’s, Nathaniel Rateliff and The Night Sweats, Kacey Musgraves, the Heartless Bastards, and the Mexican Institute of Sound. This year, Los Angeles roots masters Los Lobos will take the stage, as will Texas favorites like Patty Griffin and Robert Ellis. 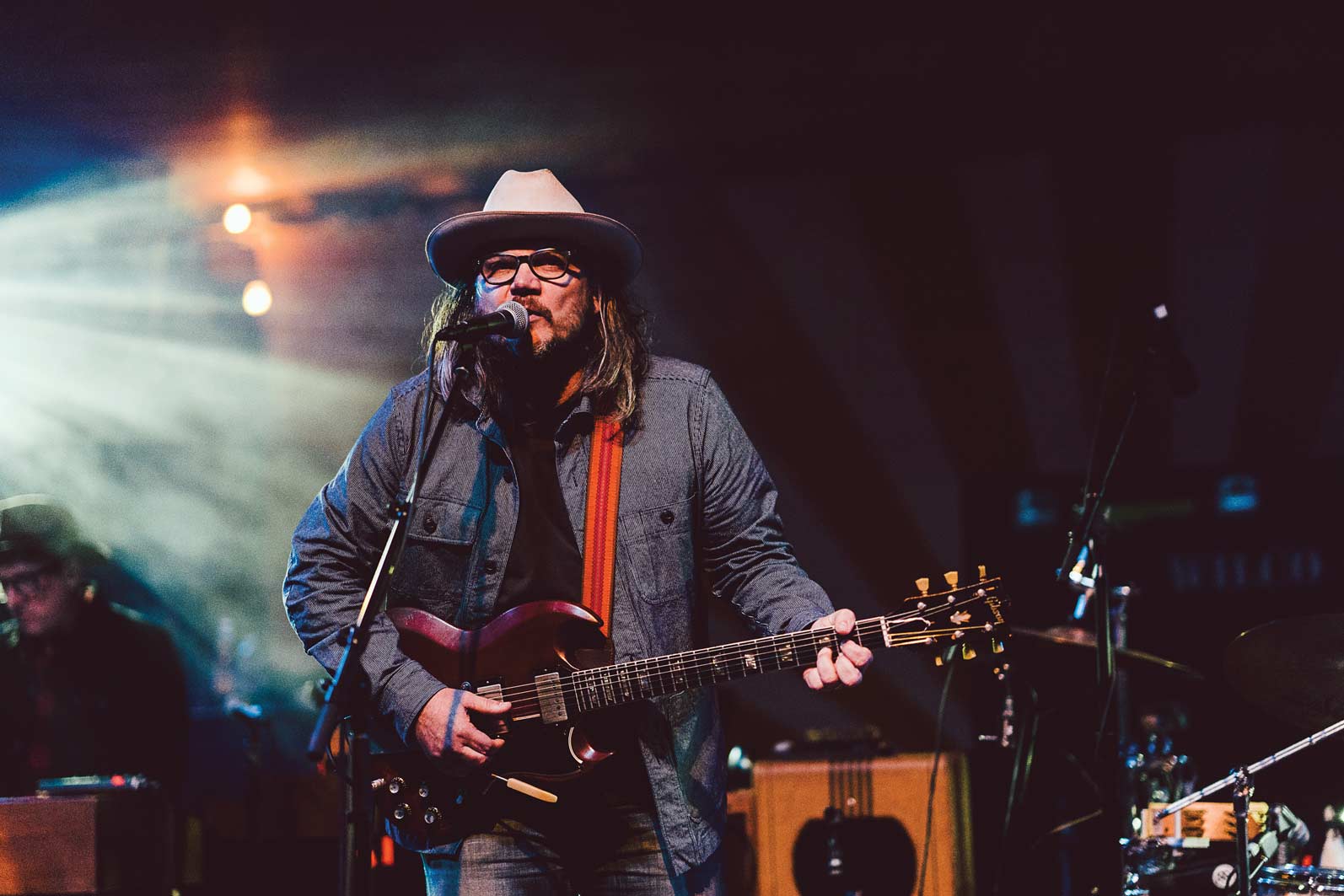 Jeff Tweedy and his band Wilco performed at Trans-Pecos Festival in 2017. Acts scheduled for this September include Los Lobos, Patty Griffin, the Texas Gentlemen, and Robert Ellis. Photo: Chad Womack

“The band lineup is largely the vision of Liz,” McKeon says. “Many of them are friends, and we’re really trying to be diverse in terms of the type of music. And then, what would be fun to kick up the dirt to? A lot of musicians come here and play for the first time, and then they fall in love. We find that they become really loyal and they want to come back every year.”

The music doesn’t start until 6 p.m. during the festival’s three days, which leaves time to explore the area and participate in the Trans-Pecos lineup of workshops. Each day, workshops meet in various El Cosmico tents and buildings for activities like leather tooling, hand embroidery, bandana printing, chain-stitching, life drawing, and olive oil tasting. Workshop prices range from about $20 for yoga to $100-plus for the craftworks.

It’s an easy walk from El Cosmico to other Marfa attractions, including the Chinati Foundation, a contemporary art museum founded by the late artist Donald Judd on a former military base. The 340-acre property exhibits modern artworks in old barracks and outdoors. Strolling a grassy pasture studded with the large concrete blocks of Judd’s 15 untitled works in concrete, 1980-1984, offers a contemplative contrast to the hubbub of the festival next door. 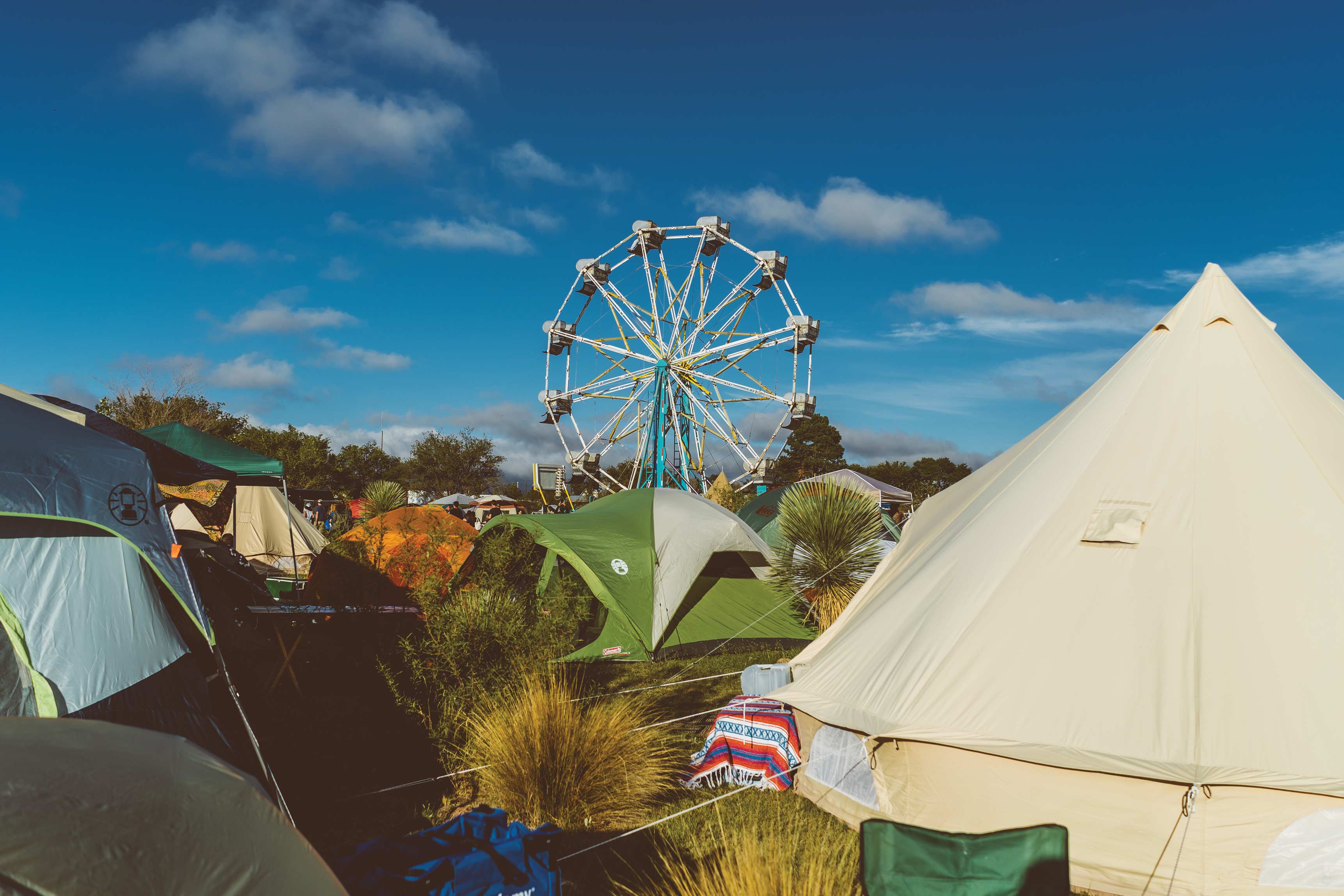 On Saturday afternoon (Sept. 22), Trans-Pecos hosts an annual baseball game at Vizcaino Park—about three miles from El Cosmico—between the Texas Playboys of Austin and Los Yonke Gallos de Marfa. Hundreds of fans turn out for the game, and the people-watching makes up for any shortcomings of the baseball itself (errors account for most of the runs scored). Highlights of the 2017 game included a fifth-inning performance by the Marfa High School Shorthorns marching band followed by a comical drill-team dance by a group of six Gallos supporters. Situated slightly above town, the park provides awesome views of distant mountains and the massive sky, where clouds drift in and out of the sun, shifting the temperature as they move.

For some festival-goers, the beauty is in whiling away the day at El Cosmico: “There’s a really laid-back, peaceful kind of vibe here. Everyone’s real respectful of one another.”

For some festival-goers, the beauty of the weekend is being at El Cosmico, where they while away the days communing with their campsite neighbors. Chad Isham, a leatherwork artist from Weatherford, attended his first Trans-Pecos Fest last year and plans to return this year, possibly with his own vendor booth. “There’s a really laid-back, peaceful kind of vibe here,” he reflects. “I haven’t felt any tension from anyone, and everyone’s real respectful of one another.”

Isham’s campsite, dubbed Campo Nativo, became a gathering place for neighbors to share meals during last year’s festival. “I love to cook, and I love to feed people. Because of that, we’ve met some really great people here that I’ll be friends with for the rest of my life,” Isham says, pointing to a small tattoo below his elbow in the shape of a Native American rain cloud symbol. “In fact I traded food last night for this little tattoo.”