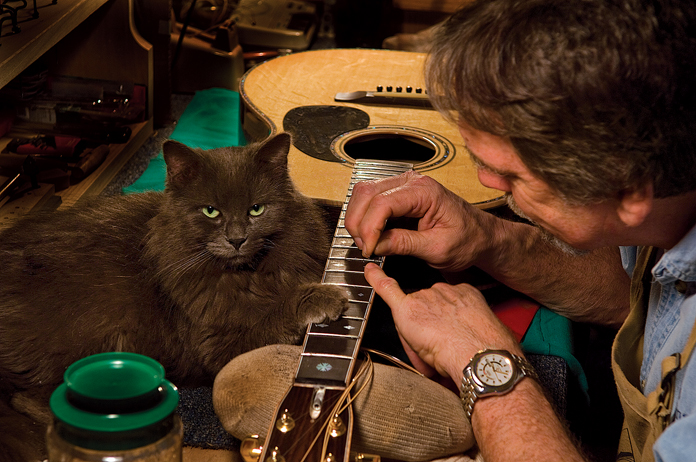 You could argue that without the guitar, fiddle, banjo, or their many stringed cousins, Texas would have been an awfully somber place. Quiet, for sure: Think of a campfire without the guitar or a barn dance without the fiddle—the scenarios don’t seem possible. And while Texans didn’t invent the first stringed instrument, we’ve certainly made our mark on the craft. According to the Texas Governor’s Music Office, more than 160 businesses statewide specialize in the repair or fabrication of stringed instruments, though far fewer call themselves luthiers.

Photographer and guitarist Stan Williams—whose images appear on these pages—recalls the first notes he heard from an Austin-made Collings guitar. “Every note spoke with clarity of voice, a ringing sustain, and perfect intonation,” Williams says. “I was in love. I wondered, ‘How many other guitar-makers are there in Texas that I don’t know about?’”

He found plenty. As Williams searched, he arrived at six luthiers whose works, he says, “are a good representation of the different types of stringed instruments in Texas.” Their backgrounds are as different as wildflowers and asphalt. One luthier, for example, ended a 30-year career as a plumber to build banjos, while another has a Master’s degree in classical-guitar performance and toured with jazz guitarist Al Di Meola. But one thing they have in common is pride of craftsmanship—the difference, according to banjo-maker Chuck Lee of Ovilla, “between an instrument made in a small shop in Texas and an instrument made in a factory overseas.” 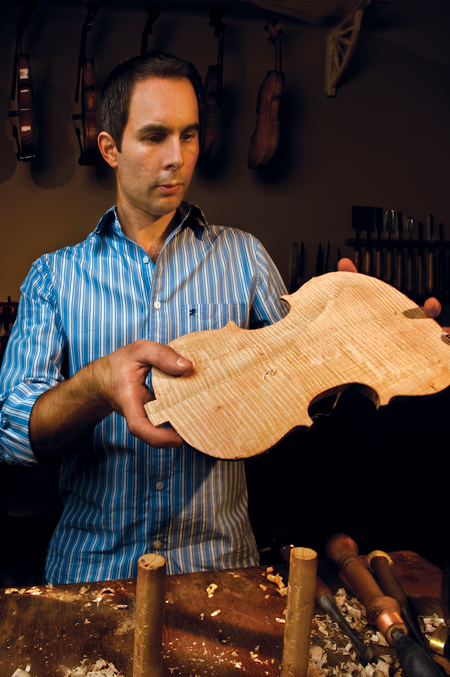 Luthier Glenn Stevens plies his craft at Fredericksburg’s Hill Country Music, a retail store specializing in sheet music and instruments of all types. He built a career making and repairing instruments in Gatlinburg and Nashville before returning to Texas to be close to family. “I like to jump back and forth between building an instrument and restoration,” says Stevens. “The thrill for me is when customers bring me something that’s close to their hearts, be it a $100,000 guitar or Grandpa’s fiddle. Maybe someone used it to tell stories, maybe it was played in a honky-tonk. Or they’re bringing you a memory of their father or grandfather. So I make it play, first, and then I restore its beauty and elegance.

“People come in with an instrument thinking they’re going to display it,” Stevens continues. “But then they think, ‘Maybe I can learn to play.’ That’s when it’s really satisfying, because an instrument dies a slow death if it’s not played. The wood becomes rigid, just as it was when it was part of a tree. Playing brings an instrument back to life and gives it a soul.”

Stephen Marchione  Houston
In the small workshop behind his home in Houston’s Montrose District, luthier Stephen Marchione crafts guitars for such players as Sting, Mark Knopfler, Paul Simon, and jazz player Mark Whitfield. “My shop resembles a high-end Italian violin-maker’s shop,” says Marchione. “I use a lot of the same tools used 400 years ago in Italy—rasps and scrapers, handplanes, and even finer hand tools for detailed woodworking.”

What is it about guitar-making that brings him such satisfaction? Marchione pauses only a moment to think. “Two things,” he says. “First, finishing a design I’ve worked on. Even more than that, though—having the design go out into the world and make music. For an instrument is not serving its purpose until it’s making music.” 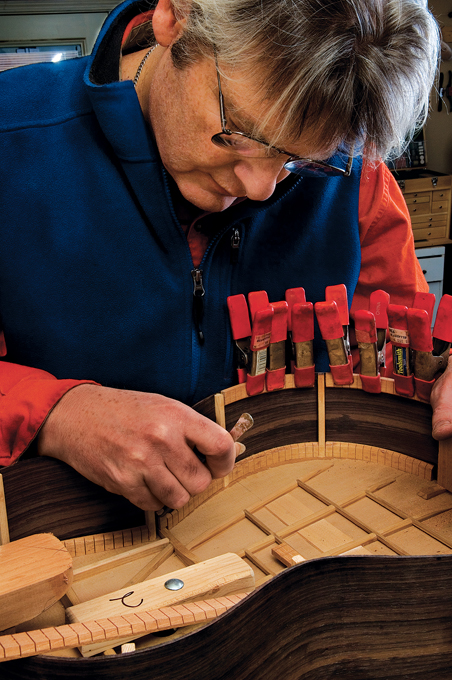 Chris Carrington  Rockwall
I relate to the guitar primarily as a player,” says luthier Chris Carrington, who for seven years toured with Al Di Meola and now specializes in making classical guitars in his workshop on the outskirts of Dallas. “I started building gui-tars for myself—guitars I could amplify on stage, at large concert halls and venues like the Blue Note in Japan,” he says. “I am a very high-level player, so I know that if my guitars meet my own standards, they’ll be concert-grade instruments.” Carrington’s guitars—like all handmade instruments—don’t come cheap: Traditional classical guitars start at $3,000. But players like Andy Summers and Al Di Meola don’t seem to mind.

Chuck Lee  Ovilla
Plumber-turned-luthier Chuck Lee, whose banjos are now popular with the likes of Bela Fleck and Texan Dan Gibson, describes how banjos struck a chord with him. “After playing banjos for almost a decade,” he says, “I had a special one on order. But when two years passed and it hadn’t been built, I realized there was a niche market. And so, with my wife’s encouragement, I started making banjos.

“At first,” he continues, “I had a ‘Hall of Shame’; I hung up all of the mistakes—slipped tools, incorrect neck cuts—to remind me to be careful. After a few years, the mistakes didn’t come as often.

“A banjo is a happy instrument,” says Lee. “It’s really hard to play something sad on a banjo. But when I’ve made a banjo, I can’t say I’ve accomplished what I wanted until the musician plays it and brings joy to himself and to the listener.”

Stephen T. Kinnaird  Nacogdoches
Another self-taught luthier, Stephen Kinnaird first visited with a guitar-maker in Atlanta in the early 1970s. “Until then,” says Kinnaird, “I thought all guitars came out of a factory. It seemed fascinating and rewarding to build one with my own hands.”

Kinnaird “eased into” building guitars by crafting dulcimers, an instrument he describes as more rustic and more forgiving. But ultimately, he was drawn to building guitars. “I love working with woods like tiger myrtle, bubinga, and bloodwood. I like the depth of the grain patterns, the luster, even the aroma,” he says. And, Kinnaird believes, the wood’s personality merges with the luthier’s to create each instrument’s unique sound. “I don’t know what it is,” says Kinnaird, “but you could give a roomful of luthiers the same pieces of beautiful wood, and our instruments would all sound different. Maybe the difference comes through our hands.”

Bill Collings  Austin
By far the biggest shop in this bunch, the Collings Guitar Shop, started by luthier Bill Collings in 1989, employs more than 80 people and fashions a dozen or so mandolins and guitars daily, shipping them to customers worldwide. Lyle Lovett and Jerry Jeff Walker (see page 14) are two of Collings’ most famous Texas clients, and other big names like Keith Richards, Pete Townshend, and Joni Mitchell also play Collings’ instruments. (You can, too: Basic guitars start at $3,000, with custom jobs exceeding $10,000.)

Every Friday at 3:30, the shop opens to visitors for a free two-hour tour, when you can observe nearly every step of production. “We’ll take you from raw materials to finished product,” says longtime employee Angela Thomas. “People are always amazed, first, when they see these big logs of mahogany, and then later, when we show them how the inlays are done.”

“Oh, we love the tours,” says luthier-in-chief Bill Collings. “The bigger, the better. It’s very satisfying to show people how we work. After all, we make every guitar the best we can. And,” he says modestly, “we’re getting pretty good at it.”