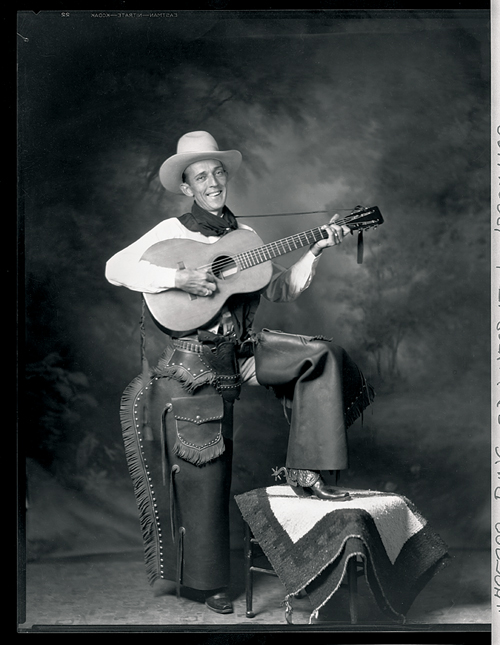 Imagine the commotion that would erupt if B.B. King, Eric Clapton, or Willie Nelson sat on a bench in downtown Blanco or Marfa and started playing. Yet, that’s the equivalent of what happened roughly 80 years ago when Jimmie Rodgers (1897-1933), the Mississippi native known as the “Father of Country Music,” launched into an impromptu performance on a Texas street corner or courthouse square.

One story tells of Rodgers returning to his Temple motel after a show in the spring of 1929. As he strummed his guitar and sang his eclectic country blues from an open window, he drew such a legion of locals that authorities intervened to break up the ensuing traffic jam.

But Rodgers’ affinity for Texas often receives little attention. In fact, Rodgers performed during the 1929 opening of San Antonio’s Majestic Theatre, and upon eventually settling in that city, he hosted a popular radio show there. Rodgers also lived for nearly two years in Kerrville, recorded frequently in Dallas, barnstormed from Borger to Beaumont, and took frequent Texas road trips in his beloved Model-A Ford.

Also known as “America’s Blue Yodeler” and the “Singing Brakeman” owing to his trademark yodel and days working on the railroad, Rodgers rocketed to stardom as the Roaring Twenties morphed into the Great Depression. During a seven-year career cut short by tuberculosis, Rodgers created a new musical style that inspired the likes of Lefty Frizzell, Hank Snow, and Merle Haggard. Rodgers was the first inductee into the Country Music Hall of Fame, hung out with humorist Will Rogers, recorded with Louis Armstrong and Bob Wills, and sold millions of records for Victor Records.

‘Even as he faced his own mortality, even as the Great Depression caused so much suffering, Jimmie was singing songs about hope.’

In the summer of 1929, hoping that Kerrville’s climate might lessen the effects of his lung disease, Rodgers moved with his wife and daughter into a two-story, hilltop home he called “Blue Yodeler’s Paradise.” The home still stands at 617 West Main, but it’s a private residence. In fact, today’s traveler will find scant traces of the famous recording artist’s nearly two years here.

However, locals have paid tribute since the 1980s to their celebrated hometown legend with an annual Jimmie Rodgers tribute on the Schreiner University campus. In recent years, the fest has been expanded to encompass a broader swath of Texas music genres (see sidebar).

In the biography Jimmie Rodgers: The Life and Times of America’s Blue Yodeler, author Nolan Porterfield describes Rodgers’ music as an amalgam of hillbilly, blues, country, and Tin Pan Alley standards. No matter how one describes his musical style, classics like “T for Texas” and “In the Jailhouse Now” still shine some 77 years after Rodgers’ death.

Dr. Kathleen Hudson, a Texas music historian who directs Kerrville’s Texas Heri-tage Music Foundation, believes Rod-gers’ significance in America’s music heritage derives from an originality that borrowed from the blues, railroad workers’ hollers, and popular music. But she thinks there’s another reason why Rodgers’ songs still resonate so strongly with his fans.

“Even as he faced his own mortality, even as the Great Depression caused so much suffering, Jimmie was singing songs about hope,” says Hudson. “That’s what really moves me when I look at the story of his life. Even though he knew his time was short, he chose to live life to the fullest, to create and write songs, and to leave something behind.”

As it has in years past, a noontime tribute to Jimmie Rodgers will anchor Kerrville’s annual Texas Heritage Music Day celebration, held Sept. 24 on the Schreiner University campus. More than 50 performers, artisans, historical reenactors, and storytellers will gather at the Robbins-Lewis Pavilion to celebrate Rodgers’ life and music and provide insight into Texas culture.

This year’s lineup will include several descendants of Jimmie Rodgers, along with Texas singer-songwriters Adam Carroll and Owen Temple. All events are free. Call 830/792-1945; www.texasheritagemusic.org.