How Monroe Dunaway Anderson made a healing impression 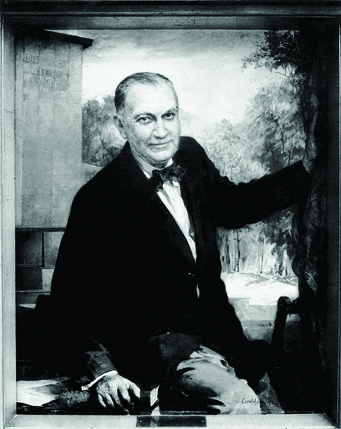 Travelers passing through the thousand-acre Texas Medical Center in Houston sometimes wonder if they’ve entered a strange alternate universe. People on the street—clad in everything from white lab coats to colorful Indian saris to trendy T-shirts—speak in languages ranging from Polish to Portuguese. From more than 100 countries they come, joining some 60,000 Texans a year, on a journey of healing to one of the center’s most famous facilities: The University of Texas M. D. Anderson Cancer Center. But while the institution’s cutting-edge patient care, research, and programs are known in every corner of the globe, its namesake remains something of a mystery.

Monroe Dunaway Anderson (1873-1939) was born in Tennessee, the sixth of eight children. After a short banking career in his hometown of Jackson, Monroe joined his older brother Frank and Frank’s brother-in-law, Will Clayton, in the cotton-trading firm of Anderson, Clayton and Company. Drawn by Houston’s proximity to the port of Galveston and the city’s robust banking environment, Monroe moved to Houston in 1907. By 1916, Houston had become the company’s headquarters. In the ensuing decades, Anderson, Clayton and Company grew to be the largest buyer, seller and shipper of raw cotton in the world.

In contrast to some of the state’s more flamboyant millionaires, M. D. Anderson lived a quiet life. He never married, and instead of a River Oaks mansion, he hung his hat in a series of downtown Houston hotels. His late nephew Thomas D. Anderson wrote that his uncle’s “most prominent characteristics were frugality and thrift, industry and integrity,” traits that rewarded the modest businessman with great wealth. “He was also,” continued the nephew, “friendly, humble, kind, humorous, and a little bashful.”

Motivated by a desire to help less fortunate citizens help themselves and to provide care for the sick, the elderly, and others in need, the Houston businessman established the M. D. Anderson Foundation in 1936. Dedicated to “the promotion of health, science, education, and advancement and diffusion of knowledge and understanding,” the foundation received $19,000,000 from Anderson’s estate upon his death in 1939.

Two years later, when the Texas Legislature appropriated $500,000 for The University of Texas to establish a hospital for cancer research and treatment, the foundation agreed to match that investment if the hospital was built in Houston and named for the foundation’s benefactor. Operated on a private estate in its formative years, The University of Texas M. D. Anderson Cancer Center moved to its present location in the new Texas Medical Center in 1954. The institution’s first building here, sometimes called “the pink palace of healing,” was erected of pink Georgia marble. Today, the Texas Medical Center is the largest concentration of medical facilities in the world, with 47 member institutions; together, they account for nearly $14 billion in regional spending and more than 245,000 jobs.

In 1973, a volunteer doing artwork with young patients at M.D. Anderson thought, “Some of these drawings are pretty enough to be on a Christmas card.” That glimmer of inspiration led to the project now known as the Children’s Art Project, which has raised more than $26 million for the in-hospital school program, patient summer camps and field trips, college scholarships, and other pediatric patient services. The project now offers cards for many occasions, gift items such as coffee mugs and decorated plates, notebooks and stationery, jewelry and ornaments, items for babies and pets, and scarves and neckties—all embellished by original designs created by young artists at M. D. Anderson. See www.childrensart.org.

Polo on the Prairie

On May 2, more than 1,500 polo players and spectators will travel to Albany’s Lazy 3 Ranch, where a West Texas pasture will be transformed into a regulation polo field for the 23rd annual Polo on the Prairie event.

Not only do participants get to watch daylong polo matches with players from across the United States and beyond, but they also enjoy brisket and sausage catered by Joe Allen’s in Abilene, dance to live music by country star Jack Ingram, and enjoy a fireworks display. Since the first Polo on the Prairie matches in 1987, the event has raised more than $3 million for research and patient-care programs at The University of Texas M. D. Anderson Cancer Center. Tickets to the event cost $50, $15 age 12 and younger. Call 866/262-9029.