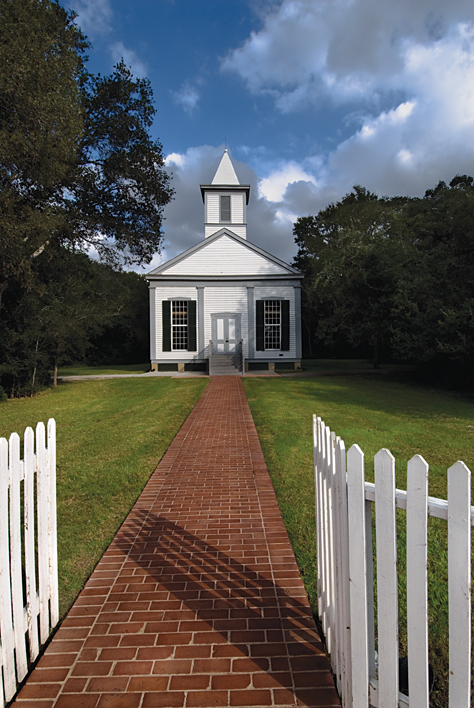 It’s a safe bet that few of the boaters and water-skiers who frequent Lake Texana, near Edna, realize that less than 75 feet below the surface of this placid body of water lies the site of a once-bustling river port. In the mid-1800s, as many as 20 vessels a week docked here.

During the Texas Revolution, the town served both as a port of entry for volunteers and as a training camp. When the war ended and the Republic was organized into counties, Texana became the seat of Jackson County. “The Navidad was a navigable river then, and boats were able to dock and turn around at Texana,” says Frank Condron, president of the Jackson County Historical Commission.

In mid-1836, New York capitalists Augustus and John Allen, in search of a site for an inland deep-water port, approached Wells about buying the land on which Texana was located. “After making their survey of the entire gulf coast they decided in favor of Texana, it being the farthest inland with no obstruction,” writes I.T. Taylor in his 1936 book, The Cavalcade of Jackson County. When the Allen brothers offered Wells a substantial sum, he set a price twice that amount. Legend says his response so angered the brothers that one of them declared, “Never will this town amount to anything. I curse it. You … will live to see rabbits and other animals inhabiting its streets.” The Allens then bought land on Buffalo Bayou and established their dream city of Houston there instead.

Nevertheless, Texana continued to grow. By 1840, it had regular steamboat service, and in 1858, residents erected a courthouse. In 1880, it boasted regular mail and stage routes, a flourishing business area, and a weekly newspaper.

The next year, agents of the New York, Texas and Mexican Railway proposed routing the railroad through Texana in exchange for $30,000. When town leaders balked, the railroad moved seven miles north, by-passing the town. Many Texana residents followed and estab-lished a new community called Edna. It soon became the county seat, and by 1884, Texana had become ghost town. It seemed as if the Allen brothers’ curse had been fulfilled. Some might say the final blow fell in 1979, when Palmetto Bend Dam was built on the Navidad River less than a mile below the old town site, forming Lake Texana and flooding the area.

Today, the reservoir is at the heart of Lake Texana State Park. Because Tex-ana’s namesake park attracts some 88,000 visitors a year, perhaps the Allen brother’s curse was dispelled after all. 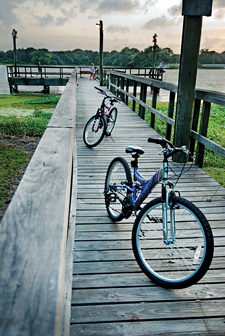 The Brackenridge Recreation Complex (across TX 111 from the state park), once the site of the Brackenridge Plantation, displays early photographs of the area and offers tours of the restored Historic Texana Church, which was built in 1859, moved to Edna in 1884, and finally moved here, a few miles north of its original location, in 2001. The quaint Greek Revival structure is a Recorded Texas Historic Landmark and listed in the National Register of Historic Places. Owned by the Lavaca-Navidad River Authority (LNRA), the park also includes the Brackenridge family cemetery. Call 361/782-5456; www.brackenridgepark.com.