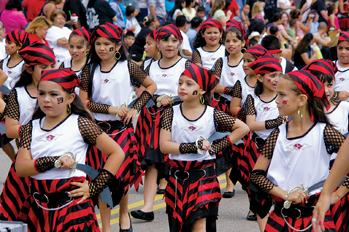 How many pirates can fit into corpus  Christi’s Buccaneer Stadium? Consider this: Some 23,000 football fans reportedly squeezed in for a hotly contested playoff game a decade ago—but no one was wearing high-seas haberdashery or carrying a cutlass.

So several  thousand pirates shouldn’t pose a problem, say the organizers of Corpus Christi’s annual Buc Days celebration (Apr. 23-May 3), which celebrates its 71st anniversary this year. As part of the big septuagenarian soiree, they’re mustering the troops to win the Guinness Book of World Records for Largest Gathering of Pirates in One Place. And blimey! The current record-holders are a group of 1,140 German pirates who assembled in Soltau for the 2007 premiere of Disney’s third Pirates of the Caribbean movie. Now that’s a passel of privateers.

Also on tap for this annual corsair carousal: a PRCA rodeo, carnival, fireworks, international music and dancing, and an illuminated night parade, which draws some 160,000 spectators.