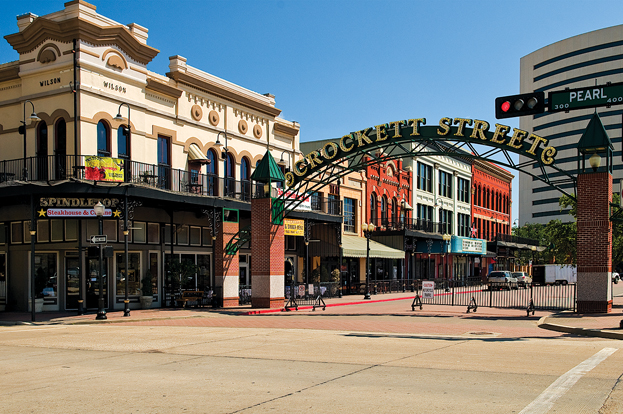 When oil was dis-covered on the outskirts of Beaumont in 1901, fortune-seekers of all stripes flocked to town to do business with the exploding population. Today, some 45 structures—most built between 1901 and 1940—near downtown Beaumont contribute to the town’s restored National Register District. Here, you’ll find attractions such as the Jefferson Theatre, the Barking Dog Coffee Lounge, Suga’s Deep South Cuisine & Jazz Bar, and the Quality Café, a restaurant that dates to the 1920s.

Among the oldest buildings in the district is the former Dixie Hotel, home of madam Rita Ainsworth’s notorious bordello, which was finally shuttered in 1961 by the James Commission. Reinvented as the Dixie Dance Hall, the building today anchors Beaumont’s Crockett Street Entertainment District, where restaurants and bars draw an eclectic crowd.

“We’re kind of progressive,” says Dixie manager Billy Lynch. “We’ll play the ‘Cotton-Eyed Joe’ and then go straight into ‘Pour Some Sugar on Me’ by Def Leppard or something by Lady Gaga.”