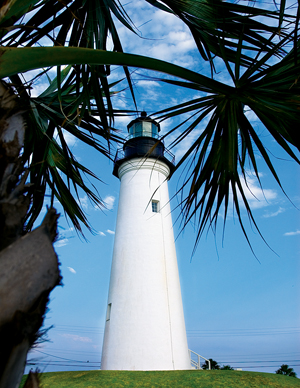 As inland-bound 19th-Century sailors began the home stretch through the waters of the Gulf of Mexico, a beacon of hope shined during even the harshest of Gulf storms: the 72-foot-high Port Isabel Lighthouse, whose stationary white light was visible from 16 miles out to sea.

Just as it did more than 150 years ago, the 1852 Port Isabel Lighthouse continues to guide visitors to Port Isabel, a community of 5,000 residents across Laguna Madre from South Padre Island. It is the only lighthouse along the Texas Gulf Coast that opens to the public, and more than 50,000 history buffs travel each year to Port Isabel to tour the lighthouse and learn more about its important role in history. Tours to the top require only $3 (and some strong leg muscles!), but the reward—panoramic views of the Laguna Madre and South Padre Island—is worth it.

But the view at the lighthouse isn’t only from the top. Most Fridays throughout the summer, the Lighthouse Establishment Cinema series invites movie-lovers to sit beneath the stars and enjoy new releases and classic films projected on the base of the lighthouse. Call 956/943-7602; www.portisabelmuseums.com.
From the April 2009 issue