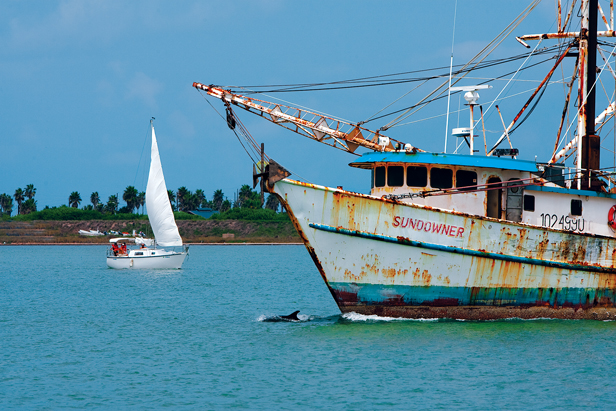 Last November, when a group of adventuresome friends suggested a Thanksgiving trip to Port Aransas, I jumped at the chance to enjoy a beachfront holiday with long walks in the still-warm surf, leisurely bicycle rides accompanied by squawking gulls, and beachcombing for shells and random sea-tumbled treasures. The five of us rented a house not far from the beach and enjoyed an idyllic three days away from the madding crowds of the city. And one morning, as I sipped hot cocoa and watched the sun emerge red-hot and magical from beyond the edge of the sea, I remembered—as I do each time I return to the Texas coast in the winter—why I love the beach when the days are short and the sun casts its rays gently.

Daytime temperatures rarely dip lower than 60 degrees Fahrenheit, for one, which means that it’s still warm enough for a T-shirt during the day and barely de-serving of a jacket in the evening. Birding tends to be rewarding, as many migratory northern species spend these months in Texas’ rich estuaries. And since lodging rates drop during the so-called low season (generally after Labor Day until Spring Break), it’s easy to extend a trip or splurge on an elaborate dinner.

I consulted with friends in some of Texas’ most popular beach communities—Galveston, South Padre Island, Rockport/Fulton, Corpus Christi, and Port Aransas—to discover other reasons to hit the beach this winter.

Galveston Island, with 32 miles of beaches and attractions ranging from historic homes and art galleries to major draws like Moody Gardens and Schlitterbahn, barely slows its pace during the winter, though even here you’ll find deals in cool-weather months. And folks are gearing up for a yearlong celebration in 2011 of the centennial of the island’s elegant Hotel Galvez & Spa, a landmark that heralded the island’s recovery after the disastrous 1900 hurricane.  Events start in December, with a celebration of Gary Cartwright’s new book The Hotel Galvez: Queen of the Gulf, followed by a series of shindigs in 2011 that include a “bathing beauty revue” that puts a contemporary (and tongue-in-cheek) spin on the Galvez’ flapper-era “Pageants of Pulchritude.”

South Padre Island, the 34-mile-long sliver of paradise at Texas’ southern tip, embraces eco-tourism year round. But nature tourists especially love the island in the winter, when the absence of crowds affords a more tranquil experience. Birding and nature-tours here run the gamut from intimate dolphin encounters aboard small craft to temperature-controlled excursions on triple-decker cruisers. SPI’s newest addition, a two-hour eco-tour
dubbed “The Sea Life Safari” studies not only bird life and dolphins, but also fish and other marine creatures, as well as the geologic history of the Laguna Madre.

Farther north, the neighboring communities of Rock-port/Fulton, Port Aransas, and Corpus Christi also em–brace winter’s eco-tourism bounty. Fewer beach-strollers mean there’s better shelling, green sea turtles put on shows around the jetties, and surfers don wet suits for some of the year’s best waves. I spoke with Carolyn Rose, the edu-cation coordinator for the Mission-Aransas Na-tional Estuarine Research Reserve  (NERR), a 185,000-acre network of public sites whose mission is to protect the estuaries and educate the public about their importance, about NERR’s new Bay Education Center in Rockport. Along with displays and interactive exhibits devoted to creatures that depend on Texas estuaries, an exhibit called “Science on a Sphere” (a six-foot globe that shows real-time images of global weather patterns) helps visitors learn about planetary science. Which, of course, affects those mesmerizing Gulf Coast sunsets.