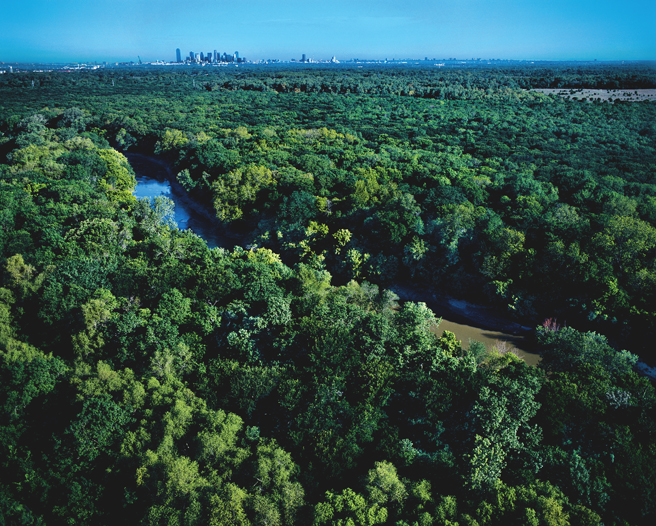 I take a boardwalk over a stream of shallow, tea-colored water and follow the trail to a small wooded area. Under a wide, blue, North Texas sky, bees buzz around hives tucked into the trees, and lizards sun on the path. I negotiate a large puddle and hear the splash of a frog jumping into the water up ahead. Tall cattails rustle in the breeze and blue dragonflies patrol the surface of a small pond.
I feel miles from civilization, yet downtown Dallas lies less than 10 minutes away.

The 120-acre Trinity River Audubon Center, which opened to the public in October 2008, represents the first step of an ambitious plan for parks, trails, bridges, and other improvements on the river, together known as the Trinity River Corridor Project. While flood-control levees hem in the waterway west of downtown, here to the south, the river meanders through the 6,000-acre Great Trinity Forest, North America’s largest urban bottomland hardwood forest.

If 6,000 acres of natural land aren’t surprise enough, there’s this: The Center occupies a former illegal dump site. Once cursed with 1.5 million tons of construction waste, it has been transformed into a rolling landscape covered with Texas prairie grasses. Four miles of trails traverse woods and circle ponds and wetlands, where shorebirds wade in the shallows. The main building, designed by architect Antoine Predock, has a vegetated roof, a rainwater-collection system, energy-efficient heating and cooling systems, solar panels, and was built of sustainable materials that include Forest Stewardship Council-certified cypress walls, bamboo flooring, and recycled denim insulation. Floor-to-ceiling windows slant toward the ground to prevent bird strikes. Outer walls sport concrete made from locally quarried gravel and sand. Dramatic angles rise above the floodplain to a soaring point, evoking the image of a bird about to take flight.

Owned by the city of Dallas and operated by Audubon Texas, the facility serves as the flagship for the organization’s Texas education and conservation initiatives.

“Our intention is to give people access to the Great Trinity Forest and a close-up look at the river itself,” says Director Chris Culak. “But it’s also interesting to see what a landfill can look like once it’s cleaned up, to see how the property is being restored to its native state—part blackland prairie, forest, wetland, and ponds. Looking at it now, you’d never think it all had trash sitting on top of it.”

The Dallas Parks and Recreation Department hopes to connect the Center’s trails to a network reaching downtown Dallas, making it possible to hike or bike here from the heart of the city. For now, the Center offers evidence of nature’s resilience and the power humans have in reversing ecological damage. On your next trip to Dallas, spend some time at this still-developing jewel. Grab a sandwich and soda in the gift shop and picnic on the outdoor deck, watching for some of the 120 different species of birds identified here. Just make sure to properly dispose of your trash.