Sailing Under the Jolly Roger

Enter the Black Dragon at Pirate's Landing in Port Isabel 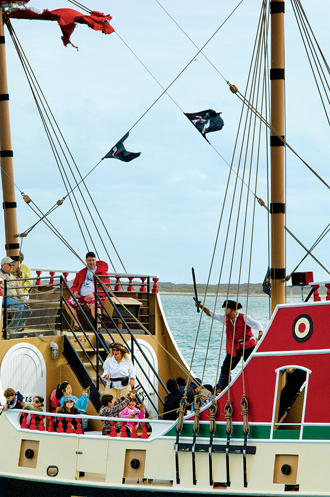 The gray-green waters of the Gulf of Mexico conceal unfathomable mysteries. After all, it was here, in the early 1800s, where the elegant, entrepreneurial pirate Jean Lafitte commanded a small navy of privateers and smugglers who seized silks, spices, and other cargo from ships bound for New Orleans.

Like most people who spend time out at sea, veteran fishing-boat captain Phil Calo found himself steeped in the lore and romance of the buccaneer lifestyle. And in 2008, with an eye toward diversifying his business, he paid homage to America’s fascination with pirates and commissioned a fantasy ship: a visually accurate replica of a 17th-Century Spanish galleon. A mirage of masts, poop deck, and cannon ports with a hull painted red, cream, and black, the Black Dragon docks in Port Isabel—at Pirate’s Landing, of course.

Eager to reenact my own buccaneering fantasies, I wander to the landing past skull-covered bandanas, tricornered hats, and mock daggers to sign up for the Black Dragon’s next two-hour cruise into the Laguna Madre. As I wait to board with a motley crew of family groups, seniors, and couples, fire-eating pirate “Wilson the Fi-rate” entertains us. We gasp as he casually snuffs flames with his hand, swallows a flaming sword, and spouts a fountain of fire from his mouth.

“Ruby the Pirate Queen” calls us to dockside to witness the firing of a black powder cannon replica. This, I can tell, will be no quiet harbor cruise.

With shreds of red sails flapping from yardarms, a skeleton tangled in the rigging, and a Jolly Roger displaying an appropriate note of lawlessness, the Black Dragon heads assuredly into the bay. After all, beneath the ship’s crow’s nest and high, raked decks operates a modern, 60-ton, diesel-powered vessel.

On board, Ruby raises our swashbuckling spirits as she reads us the Pirate Code from a weathered chart. Our mission, as if we didn’t know, is to find other ships and plunder their gold and treasure. But first, a lesson. Ruby has us chorus pirate words. “Ahoy!” we shout in unison. “Arrrrrgh!” Vowing to be true pirates, we zestfully raise our fists and slip into character.

Mimicking Ruby, the kids scan the seas before crowding around her for instructions in the sword-fighting skills so necessary for such high-seas malfeasance. The black-clad pirate Robatodo (roughly translated as “steals all”) jumps into the fray as the kids swing plastic swords at Ruby. “Pirates don’t have to fight fair,” Ruby shouts in triumph as she escapes, standing near a treasure chest brimming with red goblets, gold platters, and sparkling jewelry.

“It’s time to arm the crew!” Ruby announces, passing out flintlock pistols that shoot water. As part of her loyal band, I follow orders: “Shoot anyone taller than you.” Squirt, squirt. ”Wearing yellow.” Squirt, squirt. ”Wearing red. Not related to you.” We let loose with jokes, insults, and pirate chanteys along with gallons of water. Many laughs later, we run out of ammunition. Yo-ho- ho, the pirate life’s for me.

”Avast a dolphin!” yells Robatodo. Prior to his gig as a pirate on the Black Dragon, Robatodo guided dolphin-watch cruises in the Gulf for more than a decade, and he knows all kinds of facts about bottlenose dolphins. They eat 35 to 45 pounds of fish, squid, and crustaceans daily, for one thing. These dolphins live in pods, social groups  of two to 15 individuals. “The dolphins like playing in the bow wave,” says Captain Phil. ”And because of the deep draft on this ship, we’re seeing jumps and acrobatics we don’t see on our other excursion boats.”

We scan the nearly smooth waters, spotting more dolphins. Ahoy! Pelicans, ospreys, and gulls flying at eye level ignore the laughter and screeches of excitement drifting from the ship. But the boom of the Black Dragon’s cannon fire (recorded) startles people on the fishing boats we overtake at the jetties and in the Brownsville Ship Channel.

Marty Curtis, aboard with his wife and young son, tells me he was in the Navy for eight years. “I went around the world three times. I’ve never had this much fun on a ship,” he says.

Looking like a pirate is half the fun, declares our queen, who sports a painted mustachio. (On her, it looks good.) Everyone on board must get a mustache or a tattoo, Ruby orders. Pirate “Bonney the Blade,” an artisan who also makes jewelry on South Padre, begins painting vivid scars and tattoos on the crew.

”What do you need to hunt treasure?” Ruby asks. A map, of course. I follow the pirate queen up the ladder to the poop deck where, with a marvelous sea-dog tale, she helps the kids decipher the treasure map. (Ruby, once a Barnum & Bailey clown and Disney entertainer, developed the crew’s characters, costumes, and the script.) Young pirates scamper around the ship, snatching large gold coins from hiding places. Soon, the rattle of tambourines ushers in a limbo contest.

Meanwhile, the more mature pirates on board have bellied up to the snack bar, nibbling chips and sipping wine or beer while sitting on carved stools that resemble Captain Hook’s crocodile. We let Bonney tattoo us, too: a jade necklace, a dragon, and a long, bloody scar.

My shipmates and I claim our well-deserved booty: bright strands of beads and coin-shaped chocolates wrapped in gold foil. Right before we dock, Ruby swears us in as certified members of the Black Dragon crew.

Ashore, I’m in the mood to drink rum and treasure-hunt on South Padre Island.