Speaking of Texas: The Lone Wolf

An outlaw's nemesis (and a snappy dresser, too) 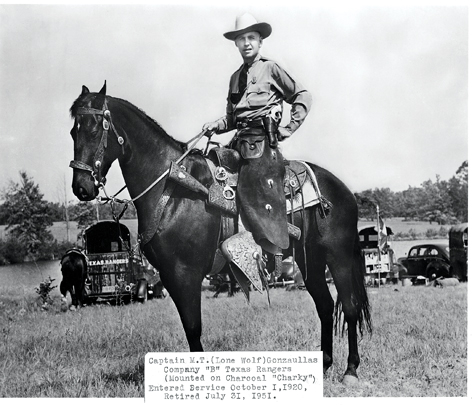 Manuel dreamed of wearing the star growing up in El Paso, where he was awestruck by the sight of legendary Ranger John R. Hughes, the “Border Boss,” on horseback. That early desire to fight lawlessness was further inflamed as a teenager, when bandits killed his two brothers and wounded his parents. After stints in the Mexican army and the United States Treasury Department, Gonzaullas took the Ranger oath on October 1, 1920.

Assigned to clean up crime in the North Texas oil fields, it wasn’t long before Gonzaullas attained his nickname. The first known printed reference to his handle appeared in the Wichita Falls Daily Times on December 29, 1920. “Ranger Gonzaullas,” reported the paper, “who is known throughout the oil fields where he has been on duty as ‘Lone Wolf,’ was recognized by at least a dozen characters … who approached him and said they were leaving for other places immediately.”

Lone Wolf’s presence inspired a similar exodus from other problem areas. Cool under fire and an excellent marksman, the Ranger arrested so many bootleggers, gambling operators, thugs and killers that he often had to improvise jail facilities. In Borger, outlaws and crooked cops alike were chained to a stout device that Lone Wolf called the “snortin’ pole.” In wide-open Kilgore, criminals were hooked to a massive chain called the “trotline.”

In addition to patrolling the oil fields, Gonzaullas’ long tenure included work on almost every headline-making case of the day. He hunted for the bank robbers—one of whom was dressed as Santa Claus—who shot up Cisco in December 1927. He was on hand for the “War of the Bridges” in 1931, when Oklahoma Governor William H. “Alfalfa Bill” Murray declared martial law at a newly built free bridge intended to replace an adjacent toll bridge. In 1947, armed guards and a state-of-the-art electrical warning system that protected illegal gambling at Arlington’s Top O’ Hill Terrace casino proved no match for Lone Wolf.

When Miriam Ferguson recaptured the governor’s office in 1933, she discharged many Rangers, including Lone Wolf. The Legislature then removed the Rangers from the governor’s jurisdiction and placed the agency under the control of the newly created Department of Public Safety. Reinstated, Gonzaullas became superintendent of the DPS Bureau of Intelligence. As an early advocate of forensics, Lone Wolf introduced the Rangers to ballistics, paraffin tests and other crime-fighting techniques.

El Lobo Solo was also admired for his sartorial showmanship. In Kilgore, for instance, he kept extra boots brilliantly shined so that he’d always have a fresh pair if he stepped in the omnipresent boom-town mud. The shootin’ irons in Lone Wolf’s hand-tooled holsters were intricately inlaid with gold.

It’s perhaps fitting, then, that after retiring from the Rangers in 1951, he spent five years as a consultant for Hollywood shoot-’em-ups. He had a business interest in the radio and television series Tales of the Texas Rangers, and exercised final approval of all scripts to ensure authenticity. After all, what Los Angeles scriptwriter would dare tangle with a man called “Lone Wolf” who could honestly remark, “I went into lots of fights by myself, and I came out by myself, too!”