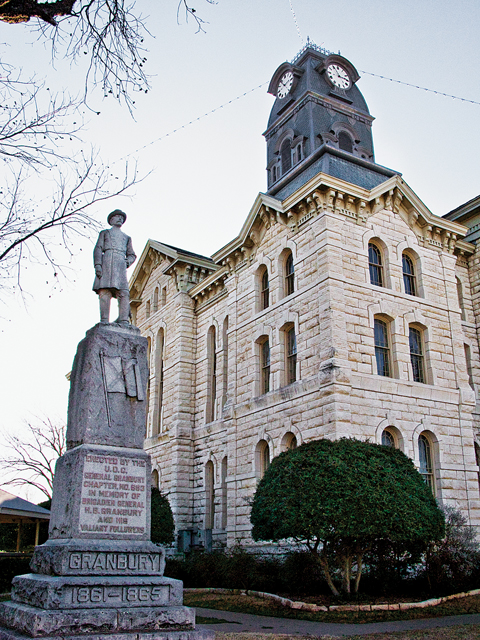 Granbury’s location, less than an hour’s drive southwest of Fort Worth on US 377, makes the town an easy weekend destination for Metroplex denizens. And because Granbury lies within another half hour’s drive of Glen Rose, Hico, and scenic driving tours, the town draws travelers from farther afield for a longer visit.

I’m typically more interested in Granbury’s historic district than the outdoors activities offered by Lake Granbury, so a late-spring invitation to speak at a writers’ conference had me anticipating a drive through Clifton, Meridian, and Walnut Springs.

The conference, called Writing Down the Brazos, is sponsored by the Dora Lee Langdon  Cultural and Educational Center, an outreach facility of Tarleton State University. The two-story, columned, Victorian house that now serves as The Langdon Center’s office had long attracted my attention because of its unexpectedly abbreviated dimensions. The house seems too tall for its depth, and I assumed it was constructed according to an unusual Greek Revival design.

When I asked Langdon Center Director Janice Horak about the house, she explained that descendents of the original owners implemented a radical form of downsizing by literally reducing the footprint of their rambling house. They sliced off the back half and rebuilt the front section, creating a visually memorable result. The building, named The Gordon House for its original owner, now anchors a five-building, city-block compound near Granbury’s courthouse square.

Before arriving at the welcoming reception in the Gordon House on Friday afternoon, I have a few minutes to check in to the Iron Horse Inn B&B, where I’ll spend two nights. Owner and host Therese Martin, who operates the B&B with her husband, Paul, guided me on a quick tour of the two-story building, one of the larger historic homes in Granbury. Each of the spacious rooms, sumptuous–ly ap-pointed, connects to a private bath. I settle into the two-room Cogdell Suite, named for the house’s original owner, Granbury banker and businessman Daniel Cogdell.

By the time the conference’s networking reception winds down that evening, a surprisingly blustery cold front has chilled the air. I notice that, in the brisk wind, a scattering of early daffodils around town seem to shiver as if they’ve forgotten their jackets. I join a group of my conference friends and walk the two blocks to Stringfellow’s restaurant on one corner of the square. A traditional menu here includes steak au poivre, a personal favorite. Our crowd quickly warms the room with lively conversation. In a few minutes, Stringfellow’s owner Dianne Rawls Davis joins us to share observations about local lore that suggests John Wilkes Booth survived attempts on his life after the Lincoln assassination and took up residence in Granbury as a barten-der, living under the name John St. Helen.

The conference starts early on Saturday, but Therese Martin breaks the Iron Horse Inn house rule of 9 a.m. breakfast to construct an omelette. After breakfast, I start a meandering drive through the center of Granbury, detouring to take a look at the new convention cen-ter with its near-by beach, des-igned to entice warm-weath–er visitors to take a dip. A few Canada geese have drifted into town with the cold front, and they’re well-suited to the frosty temperatures. I can’t help noting the irony of a literary con-ference near Lake Gran–bury because the lake is the result of the very dam that John Graves lamented when he made his 1957 canoe trip on the Brazos. That trip culminated in the Texas literary classic Goodbye to a River.

After the morning’s session, we break for lunch at the Inn on Lake Granbury, an eight-room bed and breakfast sited on well-tended grounds that feature a flagstone-lined pool. A capacious meeting space accommodates our group, and while the lunch arrangements are completed, there’s time for  a stroll around the grounds. From the property’s edge, I enjoy a sunny view across the lake to Comanche Peak, the prominent geographic and historical landmark. After the salad, sandwiches, and dessert, Inn on Lake Granbury owners Cathy Casey and Jim Leitch offer a tour of the property along with a glimpse at a couple of the luxurious rooms. The owners explain that the Langdon Center also sponsors cooking classes each month in the same meeting room where our group dines.

Later that afternoon, we have more free time and, willing to challenge the gusty wind, I visit the Hood County Courthouse. The Historic Nutt House Hotel anchors one corner of the square and invites folks in. I browse through a bookstore and an antiques shop, and am tempted to stop in to D’vine Wine and take advantage of the proprietors’ offer of a tasting, but I have one more session left at the conference and the timing is not propitious. A sign on The Downtown Store assures me “there’s something for everyone,” but I’ll have to take a rain check on fulfilling that promise.

After the conference, I have a few minutes to relax on the porch of the Iron Horse Inn, where Paul Martin offers a glass of wine and I quiz him about his career in the U.S. State Department. As he describes posts in Italy, Russia, and Africa, I wonder if the quiet life of a B&B owner will hold his interest. He assures me he’s had enough of armored cars, fenced compounds, and security guards, and that he prefers the peaceful side streets of Granbury.

Sunday morning: Time for a visit to the square. The main highways around town are heavily trafficked, but the old town is quiet. A hand-lettered chalkboard outside The Nutshell Bakery announces blueberry pancakes, but I decide to wait for breakfast at the Iron Horse. At the breakfast table, I chat with Elise and Paul Porras of Arlington, who are celebrating their anniversary. They’re on their way to Dublin, 40 miles away, to stock up on the original-recipe Dr Pepper. That’s something I could do on the way home.