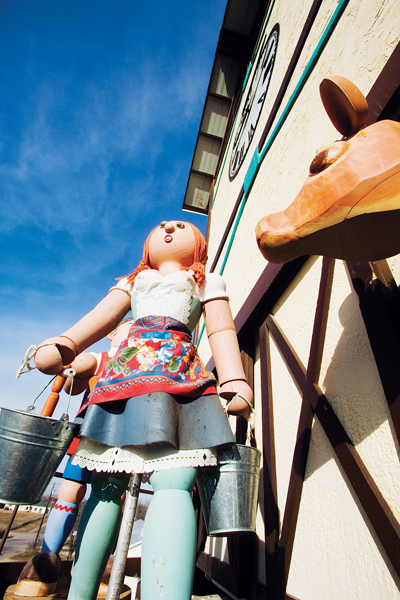 It’s a pleasant April afternoon as I step through the gates into the joyful atmosphere of Muenster’s Germanfest, where I immediately have a few serious, yet appealing, decisions to make. For example, should I bear right, toward the melodic mooing of an Alpenhorn, or follow the aromas of German sausage platters, strudel, and other German Texas food favorites?

As I observe some of the approximately 25,000 revelers at Germanfest, I notice children-kinder, if you will-tugging at their parents’ sleeves, urging them toward the rock-climbing wall, or the clowns and the mimes and magicians.

The best thing about Germanfest–April 24-26–is that you can’t make a bad decision at this three-day, Texas-size party, because everything about it is designed with fun in mind.

The first Germanfest here was held in 1976, after local officials decided to honor the town’s German heritage in conjunction with the nation’s bicentennial celebration. In so doing, they were inspired by two old German phrases—Gemütlichkeit—meaning “Good Health, Good Food, Good Friends,” and Jetzt kommen die lustigen tage—translated as “Now Come the Joyful, Happy, Exciting Days.” Accordingly, they decided to have a big, springtime party in town featuring good food, fun, and excitement for all who wanted to join in, and it has been like that ever since, growing year by year.

Yes, it’s food, music, and kiddie treats for sure. But I’ve barely gotten started at Germanfest, and I’m glad I’ve got my dancin’ boots on. So might you be. If you arrive at the right moment and feel a bit silly-nilly, you could be just in time to join the crowd lining up to do the “chicken dance”—that perennial frolic that promptly gets dancers and spectators alike laughing their feathers off.  But if you should arrive a bit later, fear not, for they’ll be “chicken dancin’” over and over again all daylong.  You’ll also be able to enjoy polka music, clogging, and folk dancing. Or, perhaps you’re more the Texas two-stepping type.  You’ll find that on tap, too, over at the pavilion, with live country music, as well as pop and rock.

Did we say “on tap?” There’s plenty of beer available, swell, for thirsty souls.

If competition is your thing, you can participate in fun runs and walks, both 5K and 15K, or bring your bicycle and have a “rally” goodtime at the fest’s Metric Century. And, if you think you’ve got the secret recipe of the gods, the Lodestar Barbecue Society holds a sanctioned barbecue cook-off in five categories—brisket, pork spare ribs, chicken, sausage, and beans.

Whenever I’m in Muenster, I can readily see why its residents take such pride in the community. Founded in 1889 by German immigrants, Muenster still maintains the ambiance of the “old country,” replete with restaurants where you can indulge in popular German fare. You can also see a series of murals in the center of town depicting a typical German village. If you take a good look around, you’ll likely discover for yourself that the word “willkommen” isn’t limited to the confines of the Germanfest grounds.

On April 24-26, the crowds will stream in for another round of Deutsche delight. And, as in previous years, the money raised will benefit a number of worthwhile nonprofit entities, including the Chamber of Commerce, the Jaycees, Knights of Columbus, Kiwanis, local Boy Scouts and cheerleaders, Sacred Heart Parish, the town library, and Keep Muenster Beautiful.

Here’s a tip: You’ll receive free admission if you arrive inauthentic German lederhosen, in costume as a milkmaid with braids, or dressed like famous characters such as Hänsel und Gretel. Or, let your imagination run wild and go as Bach, Beethoven, Martin Luther, Marlene Dietrich, Albert Einstein, German Chancellor Angela Merkel, models Claudia Schiffer or Heidi Klum, former tennis great Steffi Graf, NBA star Dirk Nowitski, or whomever you fancy. However you choose to dress, though, you’re welcome at Germanfest in Muenster. Here’s a toast to the town’s German heritage and endearing Texas hospitality.