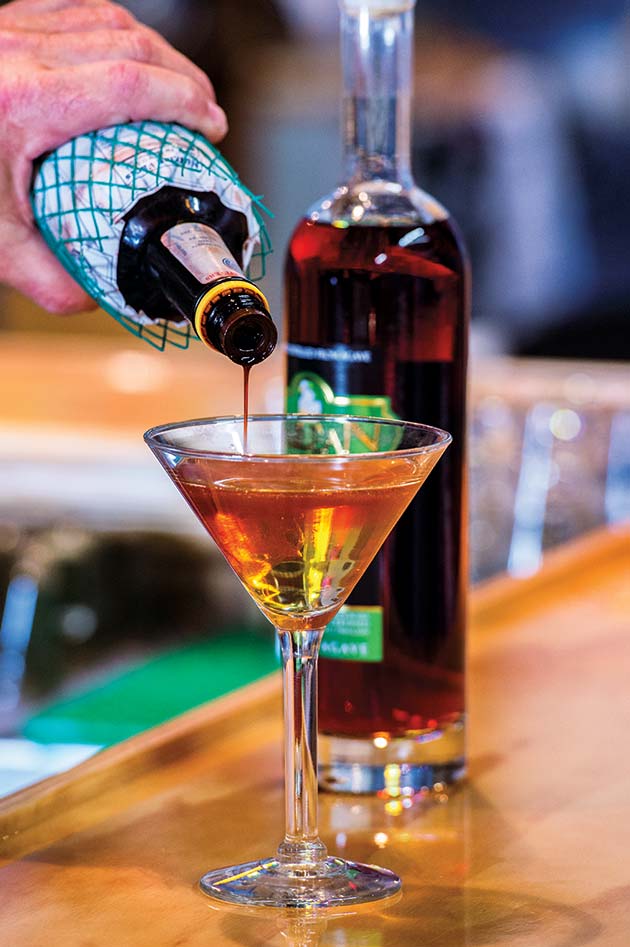 On my first visit to the Railean Distillery’s new Buccaneer Bar—which opened the weekend of September 19 last year to coincide with International “Talk Like a Pirate Day”—I ordered the bar’s version of my new favorite summer cocktail, the Dark & Stormy.

Made with Canada Dry ginger ale and rich, cola-colored Railean Reserve XO Rum, my Texas Dark & Stormy tasted both complex and refreshing. The pirate-themed bar, which shares space in a metal warehouse with hundreds of oak barrels filled with rum, feels right at home in San Leon, a bayside fishing village once frequented by Jean Lafitte and his pirates.

The Buccaneer Bar serves as a tasting room for the Railean Distillery, which makes rum, vodka, and agave spirits in a second warehouse next door. My bartender was none other than owner and master distiller Kelly Railean, a pioneer in the Texas craft distilling business. Railean and her husband, Matt, became fascinated with rum while vacationing in the British Virgin Islands in the mid-1990s. They toured famous rum distilleries of the Caribbean, studied the history of the spirit and watched market trends, and eventually decided to open a distillery in San Leon.

The building went up in 2006, and by spring 2007, Railean had produced its first rums. Three years later, Railean rums were starting to turn up in Texas bars and liquor stores. Today, Railean Distillery produces four styles of American rum, including a white rum and three barrel-aged versions.

I bought a bottle of the Railean Reserve XO Rum at the distillery, so I could use it to make Dark & Stormys at home. My wife and I got hooked on the rum cocktail with the catchy name while on vacation in the U.S. Virgin Islands. Our favorite version was served at a little mom-and-pop restaurant in St. Thomas—it was made with ginger beer fermented in a plastic wash tub. When we got back home, my wife challenged me to make a Dark & Stormy as tasty as the ones we drank on vacation.

There are only two ingredients in a Dark & Stormy (not counting the ice), and the recipe is simple: two parts dark rum and one part ginger soda. Ginger ale works, but I prefer ginger beer, a spicier version of ginger ale. My wife upped the ante: She wanted the kind of tangy, twangy ginger soda we had on vacation.

Since I have been known to make my own hot pepper sauces, pickles, and kimchi, my wife felt confident I could come up with a spicy home-brewed ginger beer. With two dogs and two small children in the house, I rejected the wash-tub idea. But there were several recipes on the Internet that didn’t seem all that complicated. So I set off for the home-brewing store to buy brewer’s yeast and bottles with clamp-tops.

After a few failed experiments, I eventually produced a delightfully over-the-top ginger beer that my wife and I love. The recipe called for ginger juice, simple syrup, lemon juice, a little cayenne, and water to be mixed in the stoppered bottle with a scant 16 grains of brewer’s yeast. After 48 hours at room temperature, the bottles are refrigerated to slow down the fermentation process.

Having perfected the ginger beer part of the equation, I experimented with rums. Some imbibers like the darkest rum they can get; others prefer the smoother, medium-dark rums made popular by the American Craft Rum movement. That’s what motivated me to visit Railean, Texas’ first craft-rum distillery.

I was skeptical at first. “Do you ferment your spirits on the premises?” I asked Kelly Railean. It’s a touchy question. Some Texas distillers buy spirits that are already made, then redistill them and bottle them under their own labels.

Kelly was delighted I asked, as she’s intensely proud of the fact that she ferments and distills her raw ingredients (molasses, in the case of rum) in-house. Railean offers tours on Fridays and Saturdays, and Kelly offered me a mini version, taking me next door to see the stainless-steel fermenting tanks and gleaming copper still.

Railean rums, vodkas, and agave spirits are the real thing—craft spirits made from scratch on the premises. Stop by for a tour of the distillery and check it out for yourself. And don’t miss the Buccaneer Bar, where you can sample a Texas Dark & Stormy or another libation.

As a Dark & Stormy connoisseur, I now stock my home bar with a variety of ginger sodas and dark rums to suit every taste. But the favorite Dark & Stormy at my house is made with my own homemade ginger beer and “San Leon’s finest,” Railean Reserve XO Rum.