A Devotion to Craft

Located in a warehouse district just beyond the northern edge of downtown Houston, a 101-year-old brick building that once served as a storage warehouse now draws hundreds of visitors six days a week. 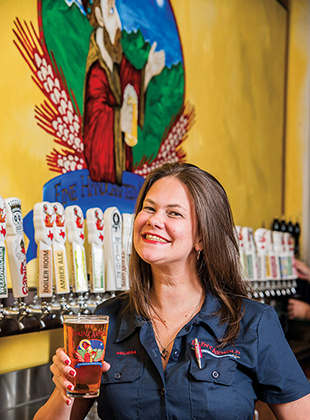 Crowds convene at this artfully repurposed three-story structure to experience not only the first-rate beverages and food produced on-site but also the prevailing camaraderie at the oldest craft brewery in Texas, Saint Arnold Brewery.

Once inside, guests ascend to the spacious second-floor Beer Hall, a haven for afternoon tasting sessions, chef-prepared cuisine, and casual conviviality. Here, too, is the starting point for guided tours of the adjoining brew house (the largest of Saint Arnold’s stainless-steel brewing tanks holds 7,000 gallons), and bottling and canning operations.

Most people however, gather here simply to socialize and sample some of the eight year-round beers or seasonal varieties available on tap. With glasses filled, revelers settle onto benches among long rows of wooden tables to celebrate the glories of Saint Arnold’s critically acclaimed Amber Ale, the Kölsch-style Fancy Lawnmower, the Elissa IPA (named for Galveston’s three-masted 1877 tall ship Elissa), and other delights.

Quaffing a freshly poured pint on a recent afternoon, a locally based construction engineer named Taylor Baumgartner explains the appeal of an afternoon at Saint Arnold. “It’s different here. I’m not a bar scene kind of guy, but this is a nice middle-of-the-day place to relax and have a really good beer,” he says. “It’s fun to be here with all these people, just hanging out together.”

His brother, visiting from San Antonio, chimes in, “I like coming here whenever I’m in town. It’s very chill, a cool atmosphere, and of course there’s great beer—plus the opportunity to talk to someone you haven’t met before.”

You may very well have the opportunity to eat something you’ve never tasted before, too, thanks to a relatively new offering at Saint Arnold: the ever-changing daily lunch specials and other fare from Executive Chef Ryan Savoie’s kitchen. On my recent midday sojourn, for instance, I savor the chef’s special, comprised of fried cream-cheese wontons with ginger hoisin sauce and spinach, followed by an entrée of shrimp and pork belly with napa cabbage and bok choy slaw, served over sticky rice with chili plum sauce. Matched with Saint Arnold Ale Wagger brown ale, it makes a delectable meal. Meanwhile, my companion, who has ordered à la carte from the “regular menu” of more than 20 items, raves about his prime rib French dip sandwich with caramelized onions and provolone, served on a pretzel roll.

On a typical afternoon in the 224-seat hall, some visitors nosh lunch and swig liquid refreshment, while others play cards, chess, and other games. Others photograph Saint Arnold’s five colorful, surrealistic murals depicting scenes from the brewing process. An eclectic, low-volume playlist enlivens the easygoing vibe, but the dominant sounds are those of easy fellowship.

Saint Arnold also brews its own root beer, a nonalcoholic favorite among children who sometimes visit with family.

“Beer is all about community,” says company founder and owner Brock Wagner. “It brings people together.” A 1987 graduate of Rice University who first experimented with home-brewing in his dorm room, Wagner grew so passionate about beer that he eventually abandoned a career as an investment banker to focus on brewing. In 1994, realizing that Houston was the largest city in the country without a packaging craft brewery, he launched Saint Arnold, named after the patron saint of brewers.

“Based on nationally defined standards regarding size, independence, and traditional techniques, we are the oldest craft brewery in Texas,” explains longtime Saint Arnold employee Lennie Ambrose. Pointing to numerous wall-mounted gold, silver, and bronze medals on display in the mash kettle room—prizes from annual competitions such as the World Beer Cup and the Great American Beer Festival—he adds, “We are also the most award-winning brewery in the South.”

Saint Arnold also brews its own root beer, a nonalcoholic favorite among children who sometimes visit with family. Made with pure cane sugar, it satisfies grown-ups, too—especially in a root-beer float made in-house with local Fat Cat Creamery’s Mexican Vanilla ice cream.

“We have two goals at Saint Arnold: to brew the best beer in Texas and create an institution that Houston is proud of,” Wagner says. Indeed, with its high-quality libations and food, sociable environment, and trailblazing legacy in the state’s thriving craft-brew industry, Saint Arnold Brewery should make all Texans proud.