Megg's Cafe in Temple serves up Southern Fare with a Twist 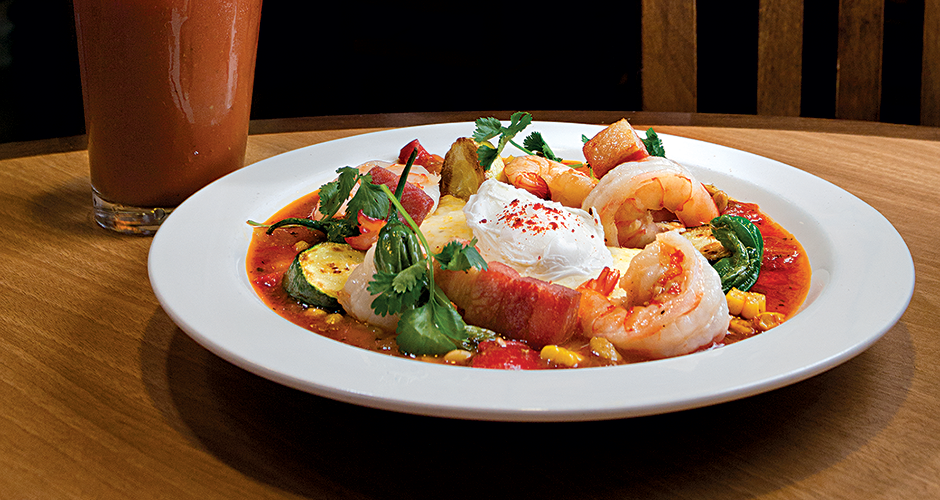 The brunch menu at Megg’s Cafe includes specialties such as shrimp and grits, a Southern classic jazzed up with shishito peppers, crispy pork belly and a poached egg.

Fnding good food on the road is always a gamble. Long stretches of Texas blacktop can be a blur of fast-food joints. And there inevitably comes a time when every weary traveler begins fantasizing about a real, home-cooked meal.

Thankfully, there’s Megg’s Cafe and Hamilton Bread Co., a family-run restaurant and bakery in Temple. Since opening in March 2010, the gourmet farm-to-table café and artisanal bakery has created a buzz throughout the state. In fact, the dedication of an entire family—mothers, fathers, sisters, spouses, and in-laws—has turned this approachable, farmhouse-style eatery into an obligatory I-35 pit stop.

In 2009, Jenni Hamilton, the café’s pastry chef and head baker, left her native Temple to pursue a lifelong passion at the prestigious French Pastry School of Chicago. Homesick at first, she didn’t realize then that moving away from Texas would ultimately bring her closer to her roots.

In Chicago, Jenni met her future husband, Corey Hamilton, who came to the program with years of restaurant experience in New York City and Las Vegas. After graduation, the duo began expanding their skill sets at such high-profile culinary institutions as the Bouchon Bakery in New York. All the while, back in Texas, Jenni’s father and older sister, Holly McCaffrey, were hatching a scheme to open a breakfast café and bakery in their hometown of Temple. They pitched their idea to Jenni and Corey in 2010, and before long, the duo bid farewell to their five-star kitchens and booked a pair of one-way flights to Texas.

After securing a location south of downtown, the team got to work. As executive chef of the new Megg’s Cafe, Corey created a breakfast menu of home-style classics made from locally sourced ingredients with a distinctly epicurean flair, like pork-belly eggs Benedict served on thick slices of homemade brioche ($10.50), and deviled eggs topped with bacon marmalade and crispy shallots ($4.50). Meanwhile, Jenni put her pastry-chef pedigree to work at the bakery, producing an array of artisanal breads (from ciabatta to country rye), assorted sweets (including cinnamon rolls and seasonal cupcakes), and custom-order specialty cakes.

The full-service bakery, Hamilton Bread Co., located directly to the right of the main foyer, is the first thing patrons see (and smell) upon entering the café. With a dozen freshly baked bread varieties on any given day, the simple choice of what variety to have with your short-rib hash can seem impossible. (Indecisive bread-lovers should try the Baker’s Basket, which includes a choice of muffin or cinnamon roll, a cinnamon-raisin brioche, and choice of toast and jam.) But fans of Megg’s know to save room for Corey’s signature dishes, like crab-cake eggs Benedict, topped with sautéed baby spinach and a savory homemade hollandaise, then served alongside a heap of crispy breakfast potatoes.

The décor at Megg’s is simple and inviting, with warm hardwood tables and pale yellow walls adorned with colorful paintings depicting culinary themes, like bakers pulling fresh loaves from the oven. Other personal touches include family photos and tabletop sugar carriers full of Trivial Pursuit cards, the latter intended to inspire conversation.

Since opening, Corey has introduced lunch and dinner service to accommodate the café’s growing customer base, but breakfast (served daily until 3 p.m.) is still the main draw for Megg’s; the lines stretch out the door every weekend.

In October, Megg’s won the “Best Food” award at Austin’s 25th annual La Dolce Vita Food & Wine Festival, beating out such high-profile restaurants as Jasper’s and Trace. But ultimately, the McCaffreys and Hamiltons don’t place undue importance on awards or titles, focusing instead on their own local culinary community.

“In the end, it’s about the food,” Corey says. “And more so, the act of gathering with family and friends.” And that inclusive philosophy extends to the café’s food purveyors and brewers. “We are very proud of our Texas craft-beer list,” says Meghan McCaffrey Collins, the third McCaffrey sister at Megg’s. “We serve a lot of beer from Jester King Brewery in Austin.” In fact, some farmers now cultivate seasonal produce specifically for Megg’s. Some farms even barter their produce, like turnips, kale, and dewberries, in exchange for Hamilton Bread goods.

And for local residents and travelers just passing through, it’s nice to know that beyond the stretches of chain eateries they can still pull off the highway to find a delicious, local restaurant that feels just like home.