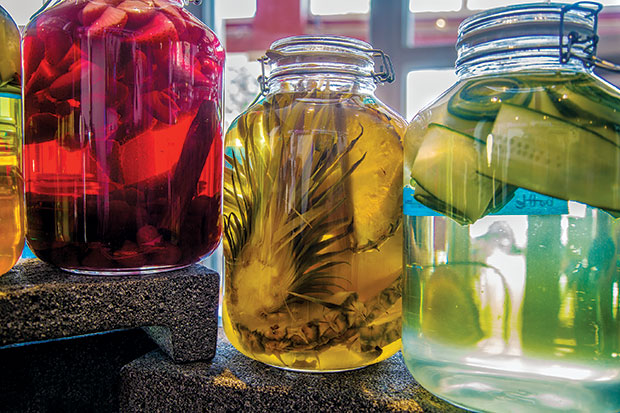 A Flavor Infusion To add complexity to the unusual cocktails on the menu, the Frutería Botanero infuses spirits with cucumbers, pineapple, and other fruits and vegetables.

And the congenial attitude makes sense, since this fresh venture by chef and restaurateur Johnny Hernandez was inspired by the fruit stands that dot Mexico’s interior, which also serve as community gathering spots. This is a polished version of a frutería, to be sure, with patio seating outside and stained concrete floors and colorful artwork inside, including a vibrant mobile of hummingbirds in flight. During the daytime, non-alcoholic refreshments such as fresh-squeezed juices, aguas frescas, fruit cups, and licuados (the latter similar to smoothies) make use of fruits and vegetables sourced at a farmers market barely a quarter mile away. And at night, these same mangoes, limes, carrots, berries, and other produce add zing to the Frutería’s ambitious bar program.

“We do real handcrafted drinks,” Varela says. “Although we can certainly prepare standards like martinis and whisky sours, the majority of people don’t come for basic drinks. ”

During the daytime, non-alcoholic refreshments such as fresh-squeezed juices and aguas frescas make use of fruits and vegetables sourced at the local farmers market.

With that, he slides a libation called a Jarrito across the bar. Usually made with fresh-squeezed orange, lime, and grapefruit juices with silver tequila, Varela likes to substitute a house specialty for the basic tequila: silver tequila infused with red and yellow sweet peppers, plus jalapeño, habanero, Anaheim, and poblano chiles. Garnished with fresh citrus and red pepper slices, the Jarrito is a refreshing and intensely flavored drink, delivering both tequila and chile flavors, but without the sting of either.

Varela recommends it with the ceviche rojo (diced fish in lime juice and salt, served with pico de gallo and a sauce made of roasted red peppers and chipotle), but there are many tempting options, such as stuffed chiles and salads, all made with fresh produce. But the simple, fresh dishes of the Frutería are only half of the food story here.

“We introduced two concepts under one roof,” says Chef Hernandez, who joins me at the bar, “because in Mexico the fruterías only do breakfast and lunch. Instead of closing, in the evening our space becomes a botanero, and we serve small plates and nightly dinner specials.”

As is evident here and at his other culinary projects around San Antonio, which include La Gloria and a new restaurant called El Machito, Hernandez greatly admires the street foods of Mexico. He includes quesadillas, gorditas, and chilapitas on his menus, along with more elegant dishes like pork with roasted tomatillos and chicken in chile almond sauce.

“Traveling through Mexico for many years, I became captivated with the breadth and depth of the cuisine, and I dreamed of presenting it with a chef’s discipline and focus. Street foods change from region to region, but cooks always use what is freshest,” Hernandez tells me. 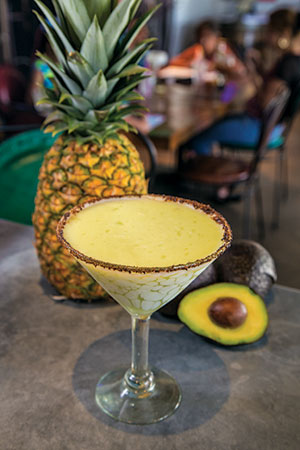 If You Like Piñacate Served in a martini glass rimmed with chile and salt, the Piñacate features a mix of tequila, citrus, pineapple, and avocado.

Of course, nobody has to school Texans about the appeal of tequila. Yet despite the state’s relative proximity to the Mexican state of Jalisco, where tequila has been produced since the 16th Century, many Texans are still only beginning to consider it in the same league as say, Scotch or bourbon. Today’s producers strive for quality and craftsmanship, and Hernandez hand-selects his tequilas for their unusual styles and complex flavor profiles.

Of the 16 cocktails on the Frutería’s drinks menu, only three are margaritas. Two are made with fresh juices and house-infused tequilas and one is a vodka-based cucumber drink (which might be breaking some kind of international treaty by being named a “margarita”). “People think that tequila and margaritas are synonymous,” says Hernandez. “Look at this one,” he says, pointing at the menu to a cocktail called the Moretón, which is made with muddled berries, almond liqueur, and tequila reposado. “I hear people say they love our ‘blackberry margarita’ all the time.”

The Moretón is another example of fresh flavors pairing unexpectedly well with tequila, but there are drinks on the menu that take even greater creative leaps. “I wanted to have a drink with avocado in it,” Hernandez says of his unusual Piñacate. “But I didn’t want it to be something that you could stick a tostada in, like a guacamole.” He hoped to keep the flavor in the background, more as a foundation. “Mexican food is very balanced,” he continues. “There’s not supposed to be a superstar in the recipe. The avocado complements the other flavors all the way through.”

The Piñacate cocktail is all about avocado, pineapple, and citrus flavors. The Herradura Single Barrel tequila cuts through the drink’s creaminess, while the salt, sugar, and dried chile pasilla on the glass’s rim adds a dusting of earthy warmth to the experience. But for the bar chef’s sake, please don’t call it an “avocado martini.”