Cultures and cuisines mix in the shadow of downtown Houston 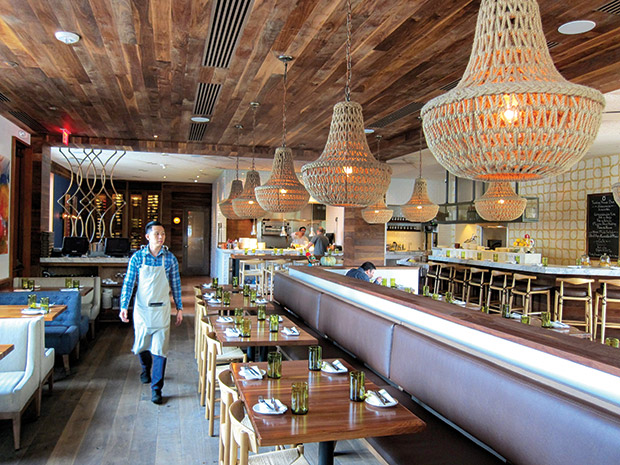 From the late ’70s through the late ’90s, Houston’s Midtown area—a pie-shaped region south of downtown loosely bordered by Interstate 45 and US 59—was largely known as a hub for Houston’s Vietnamese community. For adventurous diners, Midtown back then was the place to go for savory Vietnamese rice plates, steaming bowls of pho (Vietnamese beef noodle soup), or an inexpensive and flavorful banh mi (Vietnamese sandwich).

For details on Midtown, see www.houstonmidtown.com.

Nowadays, though you’ll still find a few pho and banh mi shops along Milam Street, higher rents and increased residential development have changed the landscape of Midtown, which now boasts a strong nightlife as well as some of Houston’s trendiest restaurants.

It’s close to dusk on a breezy Thursday evening as I approach Oporto Fooding House & Wine, the farthermost restaurant along the pedestrian-friendly, six-block stretch of Gray Street between Smith and Wilson streets. Anchored by a pair of apartment and loft developments, this part of Gray Street boasts numerous retail shops and restaurants, reminding me of Union Street in San Francisco, right down to the hard-to-find street parking. (Fortunately, there are parking lots in the area.)

The golden evening sun angles through the north-facing windows when I arrive, casting a glow across a scene that recalls a coastal Portuguese café. Beautiful woven chandeliers hang low down the middle of the room, and octagonal terra-cotta floor tiles complement porcelain tiles etched with a royal blue, abstract motif. There’s a friendly vibe reinforced by a cheery wood-burning hearth and a lively open kitchen.

This is the sort of place that you could visit solo (it has fabulous bar seating), with a group of friends, or on a date. Tonight, I’m catching up with my girlfriend Katherine over a bottle of Greek wine and assorted shareable plates of Portuguese nibbles known as petiscos. We start with a charcuterie plate of paper-thin slivers of Serrano ham, beautifully arranged in an amorphous tuft on a rectangular cutting board beside thin slices of green apple.

We also enjoy the simple and delicious batatas—roasted fingerling potatoes that are smashed with a riot of herbs and spicy-sweet tomato chutney; tangerine-tipped Gulf shrimp sautéed with copious amounts of garlic in a spicy piri piri pepper sauce enlivened by Madeira wine; and a hearty bouillabaisse-like seafood stew called caldeirada, which is rich with the briny flavors of fish, shrimp, mussels, and clams.

On another sunny afternoon, I find street parking right in front of Bagby Park, a pocket park with a dog run, a dancing fountain, a stage for concerts and other performances, and a bold installation of metal letters spelling “midtown.” A man is playing catch with his dog, while a couple of young girls are snapping photos of themselves standing in the “O” of the “midtown” letters.

Today I’m in the mood for an old-fashioned burger, so I head to the corner of the park to Rico’s Morning + Noon + Night, where I’m met by chef Jason Gould. “It’s just simple burgers and hot dogs here,” he tells me over a frozen coconut sake, a slushy, low-alcohol refresher with a tropical twist. “We serve breakfast every day, and open until 3 a.m. on Fridays and Saturdays,” he says, adding that Rico’s also serves beer and wine.

I’m tempted by the H-town burger, which is topped with bacon, onion jam, and Monterey Jack cheese, but I end up falling for the Tex-Mex burger, which is topped with chili con queso, guacamole, and spicy salsa, and served with truffled French fries. My burger is juicy, tasty, and righteously messy, and I enjoy it all the more knowing that the meat is raised by local ranchers. I make a mental note to return for breakfast or late-night eats when I’m in the area.

Wanting to walk off a bit of my meal, I set about on foot to see what other interesting eateries I can find within a few blocks of Rico’s. Across the street is Gyu-Kaku, a Japanese barbecue restaurant with more than 30 locations worldwide. Around the corner is another burger joint, Christian’s Tailgate, along with a sprawling new barbecue spot called the Republic Smokehouse & Saloon, where I spy outdoor patio seating, flat-screen TVs, and an attractive indoor bar. It’s catty-corner from sister restaurant Mr. Peeples, a steak and seafood restaurant known for its opulent and vibrant decor.

Back on Gray Street, I encounter The Fish, which specializes in sushi; the Front Porch Pub; and Cafe Layal Mediterranean Cuisine, as well as neighborhood favorite Coco Crepes, Waffles & Coffee, where I’m tempted to stop in for a dessert crepe. Less than half a block away, though, is award-winning pastry chef Rebecca Masson’s Fluff Bake Bar, which entices me with its colorful pastel-hued patio seating and inventive, addictive sweets.

Masson, who competed on Bravo TV’s “Top Chef Just Desserts,” is a pastry celebrity known in the Houston area as “The Sugar Fairy” thanks to her sublime desserts. Her Fluffernutter sandwich cookies (made with oatmeal, peanut butter, and marshmallow) have a cult following, as do the house-made moon pies known as SOLs (satellites of love) and gingersnaps baked with a wee bit of bacon fat. On weekends, I try not to miss Fluff Bake Bar’s legendary bake sales, when Masson always has some sort of weirdly wonderful creation on offer, such as Croque Monsieur pop tarts or pulled-pork Parker House rolls.

On another evening, my girlfriend Christine and I stop in at the trendy new Izakaya for some sake and light bites during happy hour. Izakaya is a Japanese-style gastropub where you’ll find a series of bold Japanese anime murals by local tattoo artist Catfish Perez. The exuberant decor helps set the stage for Chef Jean-Philippe Gaston’s eclectic menu.

We try a happy-hour portion of ha-machi crudo (yellowtail sashimi), which comes sprinkled with tiny, crispy sardines; it’s so unusual and delicious that we order another. The house-made venison hot dog, drizzled with a sweet-and-spicy sauce and served on a pretzel bun, is also fantastic—juicy and flavorful, with a satisfying combination of color and texture.

Midtown Houston used to be in the shadows of downtown Houston, both literally and figuratively, but these days, it’s definitely its own destination. Just stroll down Gray Street and take your pick of multiple international offerings that range from Tex-Mex to sushi, Portuguese to Mediterranean, burgers and hot dogs to Texas smokehouse barbecue. Midtown’s food offerings are as diverse as the Houston population, and a joy to savor.