Savor the 'Best Bloody Mary' at McAllen's Patio on Guerra 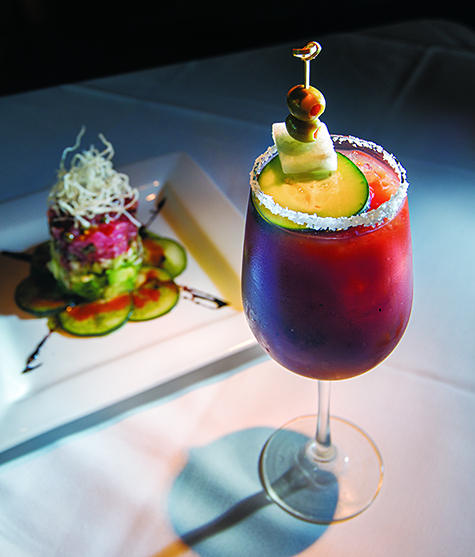 Bartender Luis Martinez places the ingredients for the Akita Bloody Mary on the black marble bar of The Patio on Guerra in McAllen, setting the stage for his version of edible art. His palette includes cherry-size balls of wasabi; tiny white bowls of shaved ginger, garlic–chili paste, soy and teriyaki sauce, and a mix of garlic powder, onion powder, and black pepper; plus large basil leaves, limes, and a pitcher of cold tomato juice. Here in McAllen, land of the margarita and the tequila-pink lemonade cocktail known as “border buttermilk,” Luis developed the drink decreed by Absolut Vodka in 2011 to be the “Best Bloody Mary” in America. Lucky for me, Luis divulges his secrets when my friends Jay and Elena Meade join me for lunch at the restaurant.

The original pressed-tin ceiling and weathered brick arches behind the bar hint at the century-old building’s history. In 1908, three Guerra brothers—ancestors of a community-oriented family that still lives in the area today— opened a general store in the fledgling town of McAllen. Their 1912 tan brick store, one of the city’s oldest commercial buildings and now home to one of the city’s best restaurants, became the center of what was called Guerra Street. Still owned and operated by the Guerra family, The Patio on Guerra resembles a border hacienda, complete with fine dining inside or out on the cozy patio.

Luis devised the Akita Mary as a drink “truly representative of South Texas,” a multicultural locale. Saluting the popularity of sushi, he merged Valley and Japanese elements; the name is a nod to Japan’s Akita region as well as the Spanish phrase aquí está (here it is).

Diners tend to enjoy watching him prepare craft cocktails, says Luis, who adapts all of his drinks to customers’ tastes. “The Akita already has enough character and complexity, so customers can choose how spicy they want it. They are the ultimate judge. I don’t say there is only one right way.”

Elena, who recalls a Wyoming bar that turned a Bloody Mary order into a macho showdown, has only one request: “Don’t kill my lips.” She and Jay ask Luis to prepare the original recipe, while I request a milder version.

Luis scoops a half ball of wasabi into a stainless-steel shaker for me and drops whole wasabi globes into shakers for Jay and Elena’s drinks. He deftly adds ingredients, slapping the basil leaves to release the fragrant oils and carefully measuring out the vodka, either Absolut or Texas-made Tito’s. After working the shakers like maracas, he pours the rosy-hued concoctions into tall glasses rimmed with coarse salt and pepper, then garnishes them with generous slices of unpeeled cucumber, “a sushi thing.”

What performance art! I feel like applauding. My first sips reveal a riot of flavors and a slow, subtle burn that tingles on my tongue without dulling my tastebuds or making my nose run. The Akita tastes both creamy and zesty. Yes, time to applaud.

Elena assesses her drink: “I like the Japanese twist. It’s spicy but not overwhelming. The cucumber goes well with it.”

Jay agrees, “There’s a kick to it. Have this with sushi and you’d be in heaven.”

“Bartending doesn’t end when you set the drink down,” says Luis, who soon brings out three appetizers to accompany our drinks. We devour a tapas plate of puffy, golden tacos filled with fajitas, avocado, and pico de gallo, then dig into something called South Texas Butter (the smoothest guacamole possible), followed by ceviche accented with oregano and lime.

I savor my drink all the way to the bottom, where I find tiny flavor bursts of ginger. Would a second Akita Mary be as delectable as the first? Blessed with a designated driver, I let Luis put together another ambrosial drink, which harmonizes with my lunch selection of tenderloin milanesa with basil pesto and oven-roasted potatoes. The tender meat, dusted with panko breadcrumbs, was hand-cut from the same prime beef as The Patio’s famous dinner steaks. Jay and Elena murmur happy sounds as they bite into barbecue tenderloin sliders with homemade potato chips.

The traditional Bloody Mary has a reputation as a restorative drink, but the Akita Mary goes beyond that. Its flavors invigorate not only tastebuds, but conversation and friendship, all enjoyed in a building that speaks of history, culture, and tradition.