This and Kombucha, Too! 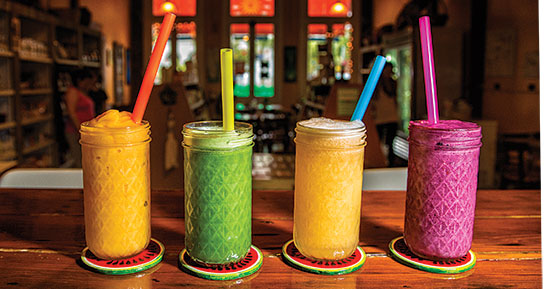 Though my vacation dining plans usually involve lots of rich eating, I decided to mix things up on a recent trip to Galveston. All those exercisers around me—surfers balancing on rushing waves, joggers kicking up sand, and bicyclists threading their way along the seawall—inspired me to forgo fried fare and search out lighter eating options.

I found the epicenter for health-conscious islanders on 25th Street, in Galveston’s Strand Historic District. This area, once known as the “Wall Street of the Southwest,” now exudes a more Zen-like quality, thanks in part to longtime yoga practitioner Kathleen DiNatale, who opened The Yoga Haven studio nearly a decade ago. Soon, seeking healthy dining options for herself and her students, she helped transform a neighboring 100-year-old building into a sister business, the Oasis Juice Bar & Market.

Make It! Smoothie recipes at texashighways.com/drink.

The Oasis’ cheery interior inspires a sense of calm. Warm mango-hued walls suggest sunshine, and an exposed-beam ceiling with gently humming fans underscores the relaxed vibe. A wall of windows floods the space with light, while paintings by local artists and a collection of Indian parasols provide pops of color. On the tables, which are made from reclaimed wood, pots of sprouted wheat grass provide living centerpieces.

Even the shelves were designed with eco-friendliness in mind: Made from recycled doors, they display a selection of grocery items like loose-leaf tea, coffee beans, natural sodas, and nut butters. DiNatale says she’s particularly excited about a new product line she’ll introduce in October: raw cacao truffles from Austin-based Chocolate Pharmacy, which incorporate herbs and spices such as saffron, fennel, garlic, and sage.

Despite the Oasis’ small but well-considered grocery options, the heart of the café remains its juice bar, which dishes out combinations like Mean & Green (spinach, celery, cucumber, and apple) and Can’t Be Beet (beet, carrot, apple, and ginger), as well as smoothies and wheat grass shots pressed from plants grown on-site. I tried the Island Sunrise, a tart combination of grapefruit, orange, pineapple, lemon, and lime juice that provided a pleasant pucker and a smooth finish. It was pretty, with a pink hue that befits its name, as well as delicious and aromatic. “We want to make sure our juices look good, taste good, and provide beneficial properties,” DiNatale says.

Since it was nearly lunchtime, I also browsed the café’s selection of vegetarian and gluten-free entrées, which include soups, salads, and sandwiches. I felt torn trying to choose between an almond butter, banana, and apple butter sandwich; a spinach and yard egg omelet garnished with house-grown sprouts; and a fried coconut and banana waffle. But I finally decided that the warm day called for something light, settling on a crisp cucumber, feta, and tomato sandwich served on toasted organic multi-grain bread.

And for a post-meal digestif, I was particularly eager to try the kombucha on tap. Kombucha, a slightly effervescent, fermented beverage that has been touted as a health elixir for centuries, has in recent years grown popular among those seeking flavorful and healthful alternatives to soda. Devotees ascribe numerous health benefits to kombucha and its natural probiotics, but I’ve long been a fan largely for its tangy and refreshing taste.

Galveston-based kombucha brewer Vince Bruno, owner of 3rd Coast Kombucha Dispensary, supplies the Oasis with a rotating line of organic, seasonal kombucha flavors, often incorporating Texas fruits like peaches and grapefruit. Originally Bruno brewed kombucha as a hobby, but he soon had so many friends and family members on his recipient list that he was “brewing on an almost absurd scale” and decided to go commercial. In Galveston, he now sells 3rd Coast Kombucha at the Oasis Juice Bar, via home delivery, and at the Sunday-morning farmer’s market, where in the warmer months he makes kombucha snowcones.

I sampled several 3rd Coast flavors, like the vibrant red Hibiscus Ginger Kombucha, whose spicy ginger contrasted jauntily with the tartness of hibiscus flowers and lemon juice. Blueberry Ginger Kombucha presented a similar jewel-toned hue and ginger flavor, with a pronounced sweetness from the berries. The Lemon Ginger Mint Kombucha offered a refreshing tanginess that made it ideal for sipping on a warm day. The most unusual version I sampled was the Sarsaparilla Kombucha, but since sarsaparilla root appears on the ingredient list of many traditionally brewed root beers, I wasn’t surprised by this kombucha’s earthy taste. Cinnamon, clove, and nutmeg melded with the sarsaparilla, warming each spicy sip.

Rounding out my Oasis experience on such a refreshing note, I harbored no regrets over abandoning my typically decadent island fare.