Wet your whistle at The Saddle Club in Alpine 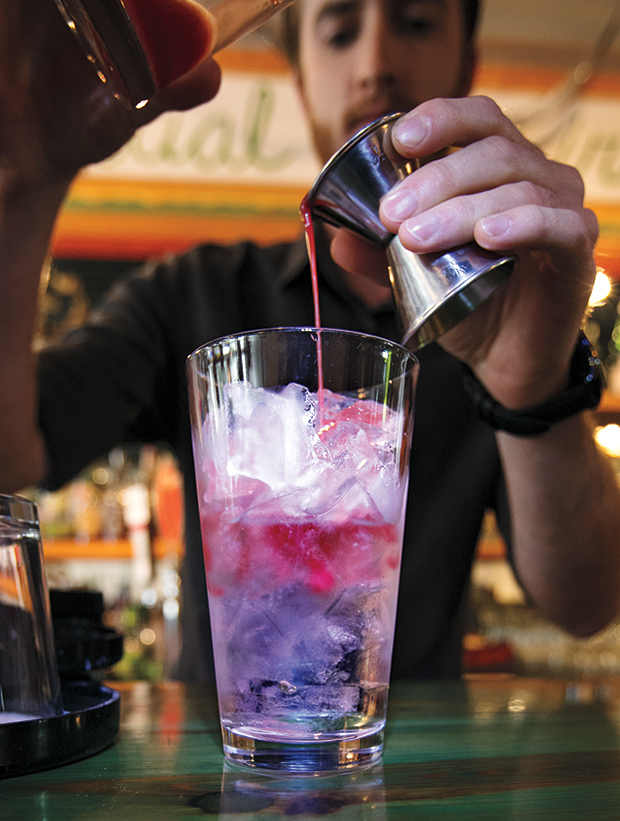 Bartenders and chefs brainstorm regularly to come up with new drinks and dishes. This refresher—made with tequila, velvet falernum, citrus juices, and a habanero shrub—is called the Texas Hellfire.

No television screens hang on the walls of The Saddle Club in Alpine. No loud music interrupts long and interesting conversations over classic cocktails and satisfying food. Alpine native Stephen Wood intentionally set out to create this calming, focused atmosphere when he opened the eclectic bar and restaurant in 2010.

Wood was about six hours from earning a degree in engineering before completely changing gears to work in hospitality. He trained at a culinary school in San Francisco and worked at restaurants in that city, Las Vegas, and New Orleans before eventually returning to Alpine. He had put himself through school bartending and knew the ropes, so at first he worked behind the bar at the Gage Hotel in nearby Marathon then moved to the kitchen as chef.

One day, Wood’s mother, who runs a dance and fitness studio in Alpine, asked him to fill in as her partner for a class. One of the students, Karen Travland, had recently remodeled Alpine’s 1929 Granada Theater as an event space and wanted to open a bar. After hammering out details, Wood and Travland became business partners, creating The Saddle Club restaurant and bar in a former saddle shop next to the theater.

The partners restored the front of the old shop to resemble its original look, with bay windows once used
for displaying saddles now perfect nooks for people-watching. They hired local workers and reused as much material as they could, including weathered pine on the wide stairway that leads to the upstairs event space and on the handcrafted bar, old pipe for the bar footrest, and tin ceiling tiles salvaged from the Granada.

“Karen wrapped it in pretty,” Wood says. “Nothing matches, but it all goes together. She has an eye.” The bar stools aren’t old, but they look it, with wooden seats and backs and metal legs. Local artists hand-painted the Saddle Club’s wooden tables and chairs, and various styles of trim around the bar sport different paint colors. The rainbow of colors wasn’t the original plan, but when Wood and Travland were trying to decide which trim to use, they asked workers to show them every style available. The hodgepodge of trim styles suited Travland, so the duo decided to keep them all.

A shaded patio out back takes advantage of the fact that Alpine is usually cooler than the rest of Texas. “During the day it’s pleasant out here, and it cools off at night,” Wood says.

The bar serves a selection of classic cocktails; Wood calls his style “old-school, pre-Prohibition” and says that visitors will find “no little umbrellas.” Both food and drink menus change about five times a year, a process that starts with the establishment’s four chefs sitting down to brainstorm new dishes, and the bar staff creating cocktails to pair with them.

I order a Peachy Keen, a slightly tart cocktail of Deep Eddy Peach Vodka, lime juice, and simple syrup. Lime zest sprinkled like confetti over the ice gives the drink a festive look. Wood says the bar uses a lot of tequila and mezcal, but he also favors Texas spirits, including Garrison Brothers whiskey and Deep Eddy vodkas.

“By allowing the bartenders to be creative and be more involved, they feel more invested in it,” he adds.
“Conceptually, the menu is created by everyone, so we have to work well together. My biggest challenge may be getting people to be willing to learn from everybody else.”

And because he frequently changes the menu, he also hears from customers who miss their favorite dishes. “When we decided we would regularly change things up, a lot of people got mad,” Wood admits. “We always have a burger of the week, though, and Epic Fries. I would be tarred and feathered if I took Epic Fries off the menu.”

After tasting them, I can see why. The signature dish arrives piled high on the plate, a mountain of lightly beer-battered fries topped with house-made queso, tender brisket, bacon, roasted red pepper aioli, and green chile sauce. I struggle to keep from polishing it all off in order to leave room for my quail mole, which expertly balances the chocolate and chile flavors.

The food menu also features special tacos on Tuesdays and a daily tapas selection. The bar serves an impressive selection of American, French, and Italian wines, plus a number of beers on tap, including those from Big Bend Brewery just down the road.

Folks in these parts have always appreciated the value of liquid refreshment; railroad workers pitched camp along a creek here in 1882, calling their settlement Osborne after the railroad section. The town’s name was unstable in those early days; in a move designed to provide the railroad company access to natural springs owned by the Murphy family, Osborne became Murphyville for a short period. But residents petitioned to change the name to Alpine, which became official in 1888.

Appreciation for a good saddle runs deep here as well. After rancher J.G. Crawford opened the town’s first saddle shop on East Holland in 1905, the business had a series of owners before moving to the building now occupied by The Saddle Club. Wood can’t say for sure if any of those early local craftsmen made the saddle that holds a place of honor in his bar. The faded and weathered piece of horse hardware purportedly disappeared from a local ranch decades ago on the back of a stolen mount, and it turned up stashed in a canyon some 40 years later. It eventually wound up in the hands of a local rancher, who donated it to the bar. Naturally, The Saddle Club needed an actual saddle. It’s a fitting conversation piece in a place designed for conversation.