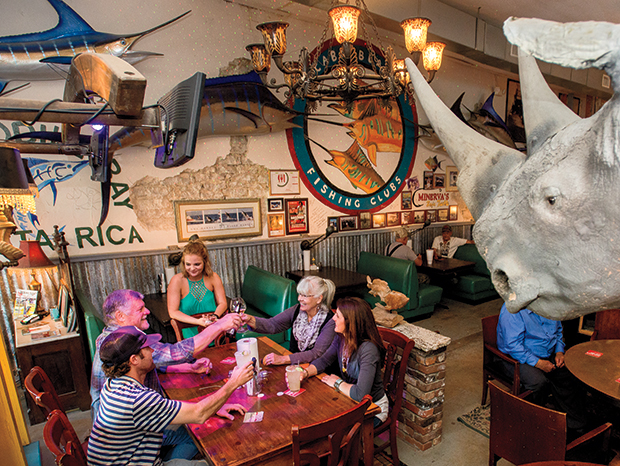 The safari and beach-themed decor somehow works at Blackie’s, where pizza, steaks, and signature biscuit pies draw diners from miles around.

The first time I walked into Blackie’s Bait Shop and spotted the blue marlin replicas hanging on the walls and a surfboard standing up in the corner, I turned to my husband and said quizzically, “Dan, we’re not in Walnut Springs anymore.” We weren’t in a bait shop, either.

“Aw, I can’t give away our pizza-crust recipe,” says owner Dobber Stephenson. “But I can tell you how we make our great hoagies.”

Dobber recommends using an 8-inch hoagie bun, then serving it open-faced and piled with salami, ham, Canadian bacon, cheese of your liking, sliced green peppers, onions, and lettuce. “Then drizzle on some Italian dressing and pour yourself a beer,” he says.

With its paintings of seafaring yachts and a funky jungle-inspired décor, the scene transported us to Key West or a remote Caribbean island. I imagined Ernest Hemingway sitting at the bar with a mojito, boasting about his latest trophy fish.

Blackie’s bar and eatery is located in a 100-year-old historic building on the main drag of Walnut Springs—a town of fewer than a thousand residents tucked between Glen Rose and Meridian. This seemingly odd juxtaposition made our experience all the more surprising and delightful.

In addition to that blue marlin, more than a dozen game-fish replicas add a coastal vibe to Blackie’s. We slid into one of the booths against an exposed stone-and-plaster wall, and we looked around the room before consulting our menus.

A few feet away, local ranchers in cowboy hats sat on tall stools at the long, granite-topped bar, mingling with residents of nearby towns and tourists passing through en route to Possum Kingdom Lake, Fossil Rim Wildlife Center, and other attractions. Whimsical, monkey-themed lamps cast golden arcs of light. Behind the bar, a mosaic of broken mirror pieces depicted waves swirling and fish swimming. Fishing poles stretched across the old metal frame of a boat suspended from the high pressed-tin ceiling.

Veteran restaurateur and Blackie’s Bait Shop owner Dobber Stephenson drew part of his inspiration for the coastal vintage vibe from the 1936 movie San Francisco. In the film, Clark Gable played Blackie Norton, proprietor of a Barbary Coast bar and gambling hall. “He is an idol of mine,” Dobber explains. “I must have seen that movie 300 times. I wanted to capture that spirit of place and time. People pick up the same vibe. Coming here is like a mini-vacation.”

That’s true for Dan and me. We live on a ranch 3 miles north of Walnut Springs, once a bustling railroad town. Now the buildings lining State Highway 144—the main drag—house a few antiques shops and, every March, a rattlesnake roundup. Dobber opened Blackie’s in 2013 and the adjacent Rattlesnake Ballroom dance hall a year later, bringing people back into Walnut Springs on weekends.

Dobber, whose given first name is Michael, got his nickname from one of the nightclubs he owned in Dallas—the Dirt Dobber. Others have included the Oar House on Lake Ray Hubbard and Hollywood & Vine in Glen Rose, plus eateries in Aspen, Denver, Los Angeles, Tulsa, Shreveport, and Panama City.

After tiring of the cold in Colorado, Dobber and his wife, Suzi, moved to Glen Rose to run Hollywood & Vine. The couple eventually sold the business, and Dobber tried to retire. For about a year, he took marlin-fishing trips on the western coast of Mexico and worked on home-improvement projects. “Finally, I ran out of things to do,” Dobber says. “And I really missed my customers. I just enjoyed being around them.”

And the feeling appears to be mutual. Now that Dobber and Suzi have focused their energies on revitalizing Walnut Springs, many of their former customers make the trek to Blackie’s. With his fringed gray mustache and gray hair tucked under a ball cap, the lanky restauranteur is hard to miss. He and Suzi make the rounds almost nightly, greeting customers and regaling them with stories.

Dan and I visited Blackie’s on Friday evening, which is steak night. Dobber stood out back in the stone courtyard, turning rib-eyes on a grill. He explained he marinates the steaks for several hours and sears them over a hot charcoal fire. The steaks arrive with a loaded baked potato and a simple salad of baby greens, sliced onion, and croutons ($20). The meat tasted juicy and well-seasoned, with just the right amount of smoky flavor.

Visitors who can’t make it for steak night often go for the pizzas, which are made fresh to order and large enough for two (price starts at $13 for a 12-inch pizza). Protein choices include hamburger, sausage, chicken, ham, turkey, meatballs, Canadian bacon, hard-boiled eggs, or crab. Vegetable and fruit toppings include olives, mushrooms, spinach, basil, onion, tomatoes, bell pepper, jalapeños, and pineapple. Tip: Ask for a side of honey to polish off the crust.

In a Southern spin on Italian calzone, Blackie’s makes biscuit pies using fresh biscuit dough. We liked the crab pie filled with spinach, crabmeat, and Muenster cheese, but there’s also a Hem-ingway pie with layers of Canadian bacon, Muenster, fresh spinach, jalapeños, and black olives ($9 each). A side of guacamole, served in a hollowed-out avocado shell, is a good addition.

The rest of the menu includes salads and hoagie-style sandwiches, including one called the “Be Linda Sandwich,” which is stuffed with cheese, ham, turkey, grilled chicken, baby greens, tomato, onion, and sliced avocado ($9).

Blackie’s offers one dessert, a cannoli variation called Xango’s, made with phyllo pastry filled with dulce de leche sauce and cheesecake, then rolled, baked, drizzled with dark chocolate and caramel, and sprinkled with powdered sugar ($5.95).

Dobber’s latest project is unfolding across the street and should be open at press time. He’s been transforming a space that once housed an antiques shop into the Yellow Dog Saloon & Salvage Company, named in honor of the Stephensons’ late Labrador retriever Duke. Morgan Street Burgers in Meridian, one of our local favorites, plans to take over the kitchen and offer its custom burgers, fried catfish, and other dishes. The complex will also include about 15 shops carrying items ranging from architectural antiques to surfboards; a bar with an extensive wine, beer, and spirits list; live entertainment; and an outdoor patio.

Walnut Springs could become “like a small Sixth Street in Austin,” Dobber told us. We’re already hooked on Blackie’s, but the “bait” goes beyond food and drinks. We’ll keep coming back for a brand of small-town hospitality that even Clark Gable’s Blackie Norton might toast, even though it’s far away from any coast.