Benno’s on the Beach in Galveston 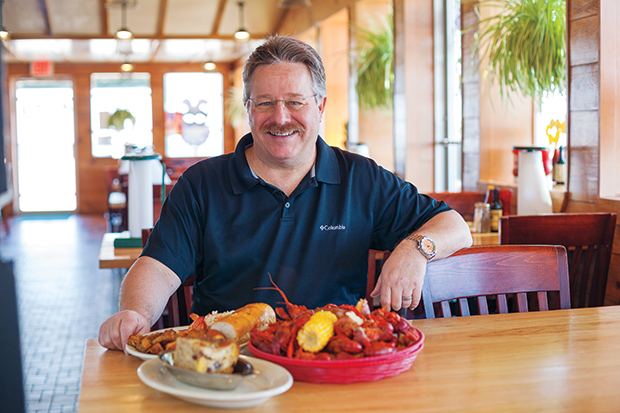 Benno’s manager Tracy Deltz shows off the Cajun-inspired seafood that put his restauranton the map.

A saltwater-scented breeze tugs at the end of a roll of paper towels planted in the middle of our wooden picnic table. Warm rays of sunshine dodge between triangles of awning over the restaurant patio. The sound of gentle surf carries from the beach just across the street, where brown pelicans glide in a V above the surface of the waves.

This place on Seawall Boulevard in Galveston aptly reflects its name: Benno’s on the Beach. I’ve come here with my daughter, Bridget, 23, looking for that laid-back Texas coast atmosphere I loved as a kid. Raised by a mother who loved experimenting with Cajun cooking and buying seafood right off the boat, I’m also looking for a Cajun-style seafood fix.

Benno Deltz opened his restaurant in this prime location on the east end of Galveston’s Seawall in 1983. Born on the island, a revered status locals refer to as “BOI,” Benno had honed his chops for years as a manager at Gaido’s Seafood Restaurant, which has been one of the town’s most popular establishments since it opened in 1911.

“Dad’s concept to begin with was more casual, more low-key, a little less expensive,” says Tracy Deltz, Benno’s son and the current manager. “Our menu has been pretty much the same the entire time. We focus on Gulf seafood, except for our crawfish and freshwater catfish. All our shrimp are wild-caught from the Gulf of Mexico, and our oysters are Galveston Bay oysters when we can get them, supplemented with Louisiana oysters when we can’t. We still get live crabs out of Galveston Bay and clean and peel them ourselves. It’s all fresh seafood, but we serve different items depending on the time of year.”

The simple brick building has picnic tables inside and out, and most of the time you’ll hear Cajun music booming from speakers mounted on the walls. Hungry diners order their food at a high counter facing an open window into the kitchen. The huge menu features all the Cajun classics, including gumbo, oysters, shrimp prepared a half-dozen ways, fish and oyster po’boys, crawfish étouffée, and crab claws.

This seafood bounty comes thanks to those waters right across the street. According to the Harte Research Institute for Gulf of Mexico Studies at Texas A&M-Corpus Christi, the Gulf produces 1.3 billion pounds of seafood each year, more than the mid-Atlantic, Chesapeake Bay, and New England areas combined. Sixty percent of the United States oyster harvest and 85 percent of the U.S. shrimp harvest comes from the Gulf.

With difficulty, I settle on one thing, the Cajun Platter ($17.95)—a sampling of shrimp, oysters, and snapper seasoned with a spicy blend of peppers, thyme, and rosemary, served with portions of fried potatoes, pasta salad, and fresh garlic bread. I add a cup of gumbo on the side and plan to steal a few bites of my daughter’s stuffed shrimp ($15.50), which arrive bulging with crab meat alongside a hefty pile of french fries and hush puppies.

“My dad developed a lot of our rec-ipes himself,” Tracy says. “We do a real good dark roux gumbo that’s his recipe and a really rich étouffée, also his recipe. All our seasonings are either blended specially for us or we blend them ourselves from our recipes. We make our tartar sauce and cocktail sauce from scratch.”

Normally a bigger fan of cocktail sauce than tartar sauce, I find I love the tartar sauce at Benno’s, which tastes light with a bit of tartness thanks to pickle relish and lemon juice.

Tracy was a college student when his father opened the restaurant in March of 1983, and that August, he took a semester off to help. He fell in love with the restaurant business, though, and the “semester off” became permanent. “I was mostly cooking at first,” he says. “I learned to cook by doing it. I was doing everything from peeling shrimp to working as a line cook, a fry cook, boiling crawfish and crabs, cleaning fish, the whole gamut.”

Today, the restaurant is known for its crawfish, Tracy says, with the season running from around the first of the year until about the middle of June. Other big hits include boiled crabs, grilled oysters, and flounder.

Customers also rave about the homemade bread pudding; customers have been known to drive all the way from Houston for a piece. A former waitress even begged to take the recipe back with her to Thailand, and Tracy agreed—not seeing much potential for competition.

“The bread pudding is my dad’s recipe, too,” he says. “I’m not even sure where he got it. It could be a family recipe.”

Naturally, I have to try it. Served in a buttery square almost as large as a Rubik’s Cube, it lives up to the hype. My daughter and I share one piece, savoring the flavors of raisins, sugar, and bourbon, then get another to go. I can definitely see driving from Houston for this.

Of course, I can see driving from just about anywhere in Texas when you add in fresh Cajun seafood with a view of the beach.