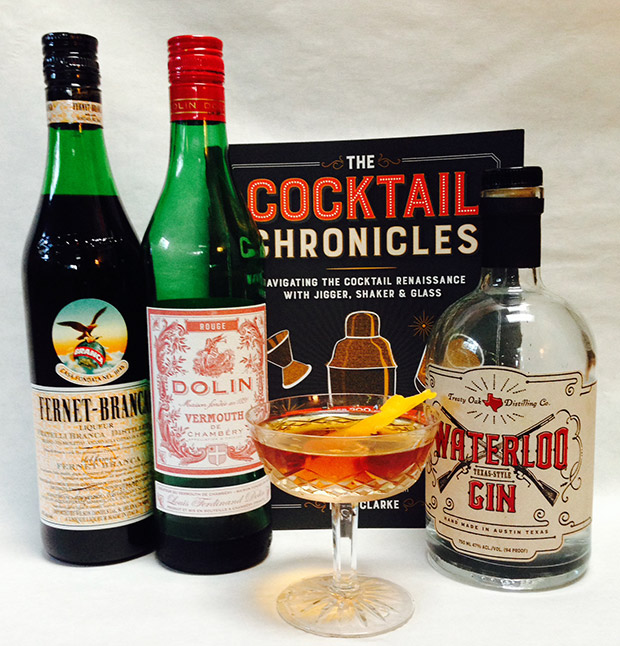 For those of us interested in both drinking delicious cocktails and learning about their history—a fun area of learning that encompasses geography, science, fashion, and language—the Oregon-based magazine Imbibe offers topnotch reading.

Muddle a quartered lime with mint and cucumber, then add other ingredients. Shake and strain into a coupe, then serve with a wedge of lime.

Launched in 2005 just as the craft-cocktail movement began to gain momentum across the United States, the bimonthly publication devotes itself to the “people, places, flavors, and culture of drinks around the world.” Executive Editor Paul Clarke, whose career at the magazine grew out of his blog, recently published a book called The Cocktail Chronicles (Spring House Press), a lively compendium of history, recipes, and bartender’s tricks and tips.

Clarke was in Houston a few months ago promoting his book and touring some of the city’s hottest bars, and I spoke to him about the cocktail scene in Texas and what innovations and inspirations he expects to see in the future.

Lori: Why did you pick Houston as your Texas stop on the book tour?

Paul: I’ve been meaning to get to Houston for a time. I’ve been hearing about the Houston culinary scene, and this was an opportunity to see it for myself. It really is collaborative. What I see in the restaurant and bar community is mutual support. It’s similar in San Francisco and Seattle, but Houston really takes that idea and runs with it. The best example is the OKRA Charity Saloon, a collaboration between many of the downtown bars. A percentage of each drink sold goes to a different charity each month, and so far OKRA has donated more than a half-million dollars to charity. The bar kind of functions as a focal point of the downtown neighborhood.

Lori: Your book grew out of your blog. Can you tell me a little bit more?

Paul: I launched a blog in May 2005. At the time, I was a freelance writer and editor; I was writing about whatever you paid me to do. But I really wanted to write about drinks. Part of the idea of the blog was that I would have a place to refine my voice and develop an online portfolio. And my timing was fortunate. Unbeknownst to me, Karen Foley, who is now publisher of the magazine, was planning to launch a magazine dedicated to drinks around this same time. I started working for the magazine as a writer in 2006 and came aboard as executive editor in 2014.

The book is a direct extension of the blog. As the 10th anniversary came across on the calendar, I saw it as a milestone as well as a marker. I had a career that had grown out of the blog, and I saw a larger thing in the cocktail world. The cocktail renaissance has picked up so much steam internationally, and I thought it was important to take a snapshot of the moment and try to predict the future. I wondered, which drinks are we mixing today that could be classics of the genre?

I went deep into the archives of bartending. I looked to old bartending manuals, newspapers, and other sources to see what bartenders were making in the 19th Century right up to Prohibition. I looked to Havana, Paris, and London, as that’s where the movement ended up when drinking became illegal in the U.S. I researched recipes, dusted them off, and spruced them up for 20th-Century palates.

Lori: So your focus is on the classics?

Paul: We’ve cleaned up some of the familiar cocktail models. Take the old-fashioned, or the martini; it takes technique and finesse to make good ones. I’ve gone back to the basics and asked: What are the characteristics that lend those drinks the tendency to be revived? The key is simplicity. “Ornate” and “complex” may be wonderful, but if the ingredients are fussy or it’s difficult to make, then chances are that the drink isn’t going to stick around.

Look at the negroni. It’s a three-ingredient drink—equal parts gin, Campari, and sweet vermouth. And you add an orange peel. The ingredients are simple, so the quality depends on the ice. The glassware. The garnish.

Lori: Do you notice anything different here in Texas than, say, in Portland? And what’s similar?

Paul: In Texas, you guys get a wider variety and perspective on tequila and mezcal, for one. That’s wonderful to see in Texas bars. Shrubs (vinegar and fruit infusions used as a tart element, almost like limes and lemons) are hot everywhere, as are sour beers. There’s a growing interest in more acidic flavors; we’re seeing that in kitchens, too. And we’re also seeing bitter flavors having a ride in the last few years. It goes hand-in-hand with a newer appreciation for European aperitif wine, like vermouth and quinquina. That’s encouraging to me, as it shows a maturation of our palates.

Lori: Can you think of a drink you had while you were in Texas that really impressed you?

Paul: There were many. But here’s a drink I put in the book. It’s served at Anvil, in Houston. It still has a surprise element. It’s called the Pliny’s Tonic. It has roots in some of familiar cocktails: gin, fresh mint, and lime juice. But it also has some contemporary touches, like crushed cucumber and habanero tincture. It is still a simple drink, and relatively simple and approachable. That’s the hallmark of something that sticks around.