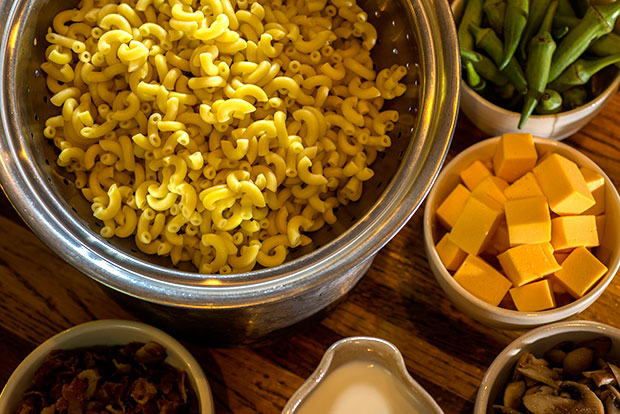 Never underestimate the comfort factor in a bubbling-hot crock of cheese-cloaked noodles pulled right from the oven. Best are versions incorporating a mixture of cheeses, topped with a crunchy layer of breadcrumbs.

(courtesy the Woodlands Resort and Spa)

Cook macaroni al dente, and do not rinse. Combine cooked macaroni with other ingredients. Bake at 325 degrees in a lined loaf pan for 30 minutes. Allow to cool and set. Slice into 1-inch-thick slices, and sauté in butter until crispy and golden brown.

Some excellent renditions can include chopped green chiles, bacon, or smoked ham — but really, there’s no need to get too fancy. Mac and cheese has become such a cherished staple that you’ll find it today on menus at barbecue joints, steak houses, and cafés known for good plates of chicken-fried steak and fried chicken. The best mac and cheese, of course, is delicious enough to be a meal in itself. As reader Jack Coleman says on Facebook, “I’m old enough to eat whatever I want. Mac and cheese is health food for the elderly.”

With a history dating to 1943, Sadler’s knows a few things about comforting, country cooking. Found downtown, just a short way from the intersection of US 79 and US 69, this East Texas jewel keeps its devoted fans happy with barbecued ribs, chicken and dumplings, fried green tomatoes, and pies. And its mac and cheese makes loyal customers like Emily Farmer Griffin take notice. “It’s the only place that can make you still crave mac and cheese after feeding four kids at home all week. It’s the best,” she posts on Facebook. Fellow poster Lulu Dyess says Sadler’s mac and cheese is, “an East Texas treasure.”

Found north of downtown in the historic Houston Heights, this contemporary dining spot is often just called “The Kitchen.” Its look may be modern, but its food mission is about serving good, satisfying food — note the large, vintage sign out front that simply says EAT. Below the burgers, fish, gumbo and salad choices, the menu offers a section just for mac and cheese: Choose Classic American or options like the ones filled with lobster, shrimp, crab, and fried oysters or the one with cheddar, shrimp, sausage, bacon, chiles, and onion.

Famous for Southern-style cooking, these live-music landmarks have fed generations of Texans with chicken-fried steak, fried chicken, meat loaf, liver and onions, catfish, and the like. The restaurant’s list of vegetables and sides is nearly as long as its history, but we know that mac and cheese is a chief reason many of you return time and again.

Between Waco and Dallas/Fort Worth, this lakeside town boasts a coffee shop-style restaurant that brings in hungry guests for breakfast, lunch, and dinner. The pancakes, club sandwiches, pork chops, and pies have a following, but it’s the mac and cheese occasionally on the menu that puts it on your comfort-food map.

Noted for its commitment to serving clean, healthy food from sustainable sources, this farm-to-table restaurant makes good-for-you food delicious in surprising ways. There on the menu, in addition to fried okra, burgers, steak, and spaghetti, there’s a mac and cheese made with cheddar, pepper jack, mozzarella, and provolone, to which you can add bacon, mushrooms, and caramelized onion.