Comfort in a Cup 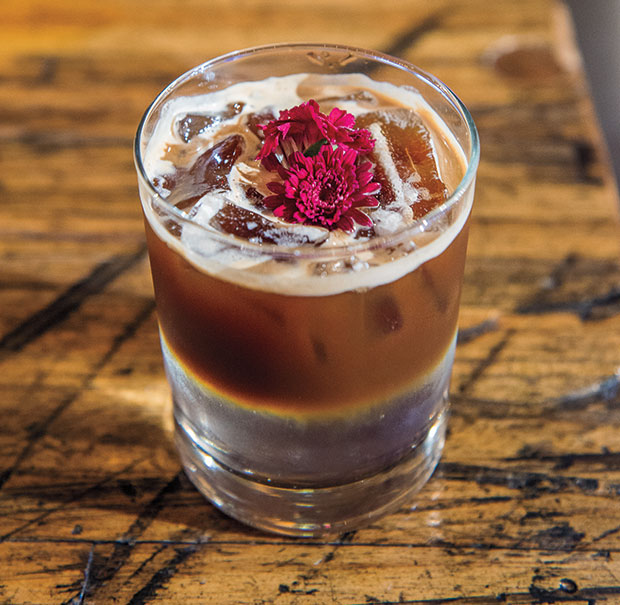 I’m raising a petite chocoholic. If I allowed it, my five-year-old would feast on chocolate for breakfast, lunch, and dinner. I’ve tried to encourage a broader palate by taking her to farms, showing her how to plant seeds, and letting her help in the kitchen—all to little avail. “I don’t like garden food,” she pronounces.

So we compromise. She takes the requisite number of vegetable bites, and I occasionally reward her with sweet treats. So when I hear that there’s a place in nearby Denton that boasts chocolate milk on tap, my husband and I load up our little chocolate lover and her siblings to make a beeline for West Oak Coffee Bar.

A fresh face in Denton’s robust coffee shop scene, West Oak opened in 2014. The cafe’s warm industrial vibe attracts plenty of college students, and also caters to urbanites seeking a sophisticated coffee scene. While the coffee might be modern, the building itself is full of historic charm. Constructed in 1882 as a bank, the building later housed a farm-loan company and a shoe store, but in the 1980s it fell into disrepair and was left vacant for nearly three decades.

In 2013, though, friends Matt Fisher and Clay Rozell, firefighters in North Richland Hills and Denton, discovered the deteriorating building and began launching plans to lease it and restore it as a gathering spot for high-quality coffee and food. Fisher toured the country and gathered inspiration from far-flung coffee shops, and he merged those ideas with trends he noted in the local market.

The new tenants sought to honor the building’s history with the café’s decor. This sensibility shines in a wooden bar countertop crafted from the flooring of an old freight-train box car, exposed brick walls, and a polished banquet table made of wood from a former bowling alley floor in Decatur. The two used some of the building’s original baseboards to create wooden letters spelling out “West Oak,” which they display on a shelf at the front of the shop. All this original wood contrasts nicely with contemporary accents like oversize iron light fixtures, which cast a mellow glow throughout the space.

Facing the historic Denton County Courthouse, the café offers a prime spot for people-watching, as crowds often gather on the courthouse lawn for impromptu concerts, games of Frisbee, and picnics. Half-moon transom windows even grant glimpses of the courthouse lawn’s stately oak trees swaying in the wind.

After we settle into low-slung wooden and leather chairs, the kids dive into their much-anticipated chocolate milk on tap. Though I’m not sure they take the time to savor its nuances, I do; the nitrogen-fueled tap creates a surprisingly full and creamy body.

Rozell tells me that the beverage appeals to adults as much as it does to children. “It’s a feel-good beverage,” he says, “It brings back memories of childhood.”

Mixing milk with sugar and cocoa has long influenced American culture, a fact evidenced in a 1785 letter to John Adams by Thomas Jefferson, who wrote: “The superiority of chocolate, both for health and nourishment, will soon give it the same preference over tea and coffee in America which it has in Spain.”

Jefferson certainly esteemed his chocolate, but he may have undershot the American appreciation for coffee, which West Oak brews with particular attention to detail. The café features espressos made with a variety of milks (including almond, coconut, and hemp) as well as house-roasted coffee made in a manual brewing device called a Hario V60. Inevitably, many patrons choose to combine this expertly roasted coffee with the chocolate milk on tap.

West Oak’s menu features plenty of other “grown-up” drinks too, from kombucha on tap to herb-infused tonics and loose-leaf teas. My husband orders a peanut butter pretzel cortado, an espresso sweetened with milk and peanut butter syrup, which is served in a glass rimmed with powdered chocolate and crushed pretzels. And I’m happy with my cilantro-ginger lemonade, served in a sugar-rimmed glass. Refreshing and only slightly sweet, the drink boasts a faint hint of spice from the ginger while the cilantro lends an herbal zing.

The food section of the menu features a carefully curated array of toasts, soups, muffins, and pies. Vegan and gluten-free options abound in treats like chia-seed pudding and avocado muffins. Chef Katie Puryear says she aims to unite these diverse elements with a theme of “homestyle modern with a decadent twist.”

For dessert, we order a few slices of pie to share. My son scarfs down the vegan key lime, which marries creamy tartness with a rich Graham cracker crust. And the rest of us haggle over bites of the strawberry-basil and coconut-cream pies. The latter is a decadently creamy concoction garnished with crushed pretzels and a drizzle of caramel. Ranking as my favorite slice, the strawberry-basil pie combines a light and fluffy mousse filling with a drizzle of zesty strawberry-basil purée.

We may have come to West Oak to indulge the whims of our children, but we found a wide range of delicious food and drink that appealed to all ages. Maybe we should set our compass in pursuit of chocolate milk more often.