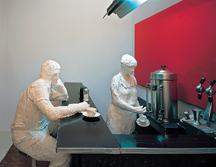 After a taste of nostalgia at Highland Park Pharmacy, head to down-town Dallas and check out another counter setting, this one on view through April 5 at the Nasher Sculpture Center. The Diner, one of 15 sculptures in George Segal: Street Scenes, depicts a customer and a waitress at the counter of an otherwise empty New York City diner, each seemingly oblivious to the other.

Such disengagement was a common theme in sculptor George Segal’s exploration of urban life. For more than 30 years, Segal (1924-2000) created life-size plaster models of people and placed them in everyday situations, such as crossing a street or riding a bus. In the case of The Diner, everything in the physical environment—from the floor to the fluorescent light hanging overhead—was salvaged from a real diner. A glass sugar dispens-er is placed on the countertop.

“Segal established these theatrical scenes with actual backdrops from real life and plaster casts of actual people,” says Jed Morse, the Nasher’s acting chief curator.  “They evoke human stories, whether it’s a customer sitting alone at a diner or a group of people trudging home from work with the weight of the world on their shoulders.”

After touring the center, stop by the Nasher Cafe and sample the new menu items created by Wolfgang Puck, such as turkey-black bean chili and an apple-Brie-chicken sandwich. Call 214/242-5100; www.nashersculpturecenter.org.