An Irishman tears into the Big Texan steak challenge 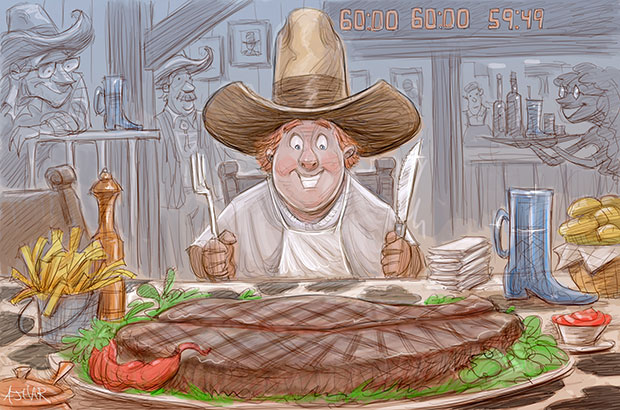 If there were a rite of passage into the Texan tribe, surely it would be the 72-ounce steak challenge at The Big Texan Steak Ranch in Amarillo. Could anything be bigger, or more Texan? To an Irishman raised on Western flicks like myself, the very name Amarillo conjures up images of tumbleweeds, rattlesnakes, and yodeling cowboys.

As Bobby Lee, the longtime owner of The Big Texan, puts it: “If you go to Hawaii, you expect to see girls in grass skirts; if you come to Texas, you want to see cowboys and big steaks.”

With a recent family trip to Amarillo on the calendar, I decided the time had come for me to burnish my Texan credentials by tackling the 72-ounce steak challenge. Sure, I’ve lived in Texas for 10 years, married a Texan, and am raising two proud Texan daughters. But I’ve never eaten more than a half-pound of meat in one sitting, much less a four-and-a-half-pound steak.

My mentor in the challenge was my brother-in-law, a big Texan who has matched me turkey leg for turkey leg in any number of multi-plate Thanksgiving dinners. John is a veteran of the challenge (he came up short) and impressed on me the gravity of the quest I had just undertaken over several bowls of chili one evening.

The Big Texan’s 72-ounce steak meal is only free if you eat it entirely. Non-finishers must pay the full $72 cost. Only about 15 percent of contestants finish the steak and side dishes.

“You’ve got an hour to do it,” he explained. “Hell, it’d take you an hour just to cut that thing into bite-size chunks! And you’ve got to finish the sides, too. They give you a baked potato the size of a bowling ball … . Here, get another bowl of chili. You’re in training!”

Seeking more instructive advice, I found the website of Randy Santel, a decorated “competitive eater” with a track record of downing multi-pound piles of meat. Santel advises approaching his discipline much like ninjas approach theirs—start with modest goals and raise the bar gradually until you are capable of great feats.

About 18 hours before the challenge, I followed Santel’s recommendation to eat a large but easily digestible meal. Santel usually devours a large watermelon; I opted for several large bowls of muesli. Then I chugged two pints of water. I was ready.

I saw my first billboard for the “Free 72-ounce Steak Dinner” not long after I left my home in Denton, still five hours from Amarillo. Truckers can pick up the trail as far afield as California, where The Big Texan has billboards advertising the challenge.

Eating contests are as American as apple pie, but The Big Texan’s steak offer was one of the first restaurant-based food challenges. When Bobby’s father, R.J. Lee, opened The Big Texan on historic Route 66 in 1960, he soon realized that tourists loved to watch the cowboys from the local stockyards one-up each other at the dinner table.

The direct inspiration for the challenge was a wager: One day, a group of regulars each threw a dollar into a cowboy hat to bet on who could eat the most one-pound steaks. The winner chomped through four-and-a-half of them (hence the 72 ounces), a shrimp cocktail, and a bread roll.

Throw in a salad and a baked potato, and that’s pretty much the same meal that confronted me the day I sauntered into The Big Texan, a bright yellow, Old West-themed complex on Interstate 40.

Molly Schuyler, a 125-pound woman from Nebraska, ate the 72-ounce steak meal in 4:58 this May, setting a new record. In the ensuing 10 minutes, she polished off a second steak meal.

Challenge-eaters are seated at an elevated dais in front of the steak grill. Overhead, an electronic ticker counts down the 60-minute time limit. A beefy man from North Carolina was taking his curtain call as I prepared to make my entrance. The triumphant southeasterner radiated a certain post-prandial glow and looked about four-and-a-half pounds above his fighting weight of 295.

It’s amazing how hard you can make a simple act just by thinking about it. After a flying start, I was soon masticating every morsel obsessively. I had only eaten about a third of the steak in the first 35 minutes. I got most of the sides down, but I was over-thinking my meal.

“You hit the wall,” Lee said. “I’ve seen it before: that shade of green, that little sweat on your forehead, that pain in your jaws.”

In the dying seconds, I lifted up the remaining half of the steak and bit into the side of it.  The buzzer sounded. The crowd applauded. I poured a cowboy-boot shaped pitcher of water over my head.

In hindsight, I maintain that my stomach had adequate room. It was my technique and my psychology that let me down. “Mind over matter,” a Richard Wiggan wrote on the “Words of Wisdom” board reserved for those who conquer the challenge. Next time, maybe I’ll make the board. For now, I’ll have to settle for being half-Texan.