Are these old-world crumb cakes the way to world peace? 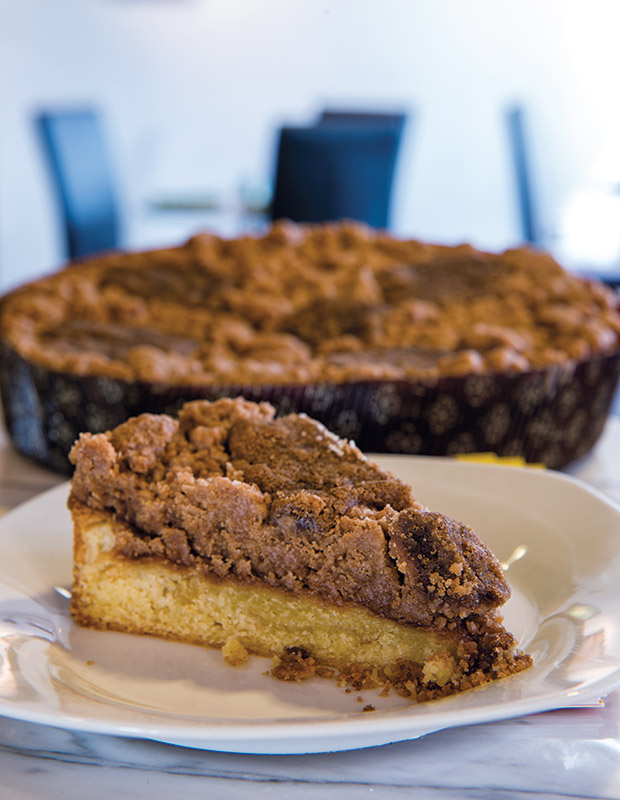 Since relocating to the Dallas suburb of Forney, I’ve discovered not only the charms of living in a small town, but also several surprising food finds.

I’ve become particularly enamored with a European-style bistro called Crumbzz, located in a historic building downtown. Boasting “the finest crumb cake in the world,” the bistro also offers a menu of breakfast and lunch foods with roots in Europe and the Caribbean.

Eager to explore our new town, my husband Matt and I recently took advantage of a rare kid-free weekend by indulging in a breakfast date at Crumbzz. Wanting a prime view of the kitchen action, we chose seats at the Italian Carrera marble bar, which chef and owner J Stephen Sadler told us originated “from the same quarry as Michelangelo’s David.” The vantage point allowed us a peek into the fast-paced workings of the open kitchen, and we watched chefs chopping vegetables and flipping pancakes while instructing assistants on how to time the baking of a perfectly puffed soufflé.

As I took in the bistro’s sleek atmosphere, complete with slate floors, leather chairs, and aluminum tables, I wondered how it came to anchor the revitalization of a downtown populated by only a few other restaurants and boutiques. Sadler filled me in, recounting his journey as a busy New York bakery owner who moved south to escape the harsh northern winters. Landing first in Fort Lauderdale, Sadler put the bakery business on hold for awhile to pursue other business interests, and soon began looking for a city with easier airline access to both coasts. “I researched the biggest airports in the country and looked at a map,” Sadler says. “Chicago is too cold, so I moved to Dallas.”

In Dallas, though, a chance encounter with a former customer convinced him to get back into the bakery business. “This time,” Sadler says with a laugh, “I thought I’d stick to mail-order. I was tired of getting up at 4 a.m.” Appearing on a local news program to talk about his mail-order crumb cakes, though, he casually mentioned that he might be amenable to opening a storefront again if he could find a historic building with a workable kitchen. A business booster in Forney saw the program and contacted Sadler with the prospect of moving into an 1865 downtown building that was then serving as offices. The proposal found an enthusiastic recipient in Sadler, who added sophisticated touches to the space while retaining original elements like the bead-board ceiling. Crumbzz opened for business in 2011.

The menu here reflects Sadler’s travels through Europe and the Caribbean. This lively romp in continental cuisine and tropical fare includes dishes like a German-inspired grilled cheese sandwich accented by grilled mushrooms and caramelized onions, a vibrant Italian tomato soup, streusel-topped Parisian style oatmeal, and Jamaican banana-rum French toast. The popular crumb cakes—five regular varieties plus a monthly seasonal special—are based on a 400-year-old Sadler family recipe from Austria. Sadler brings a little bit of Texas to these recipes by using local butter, eggs, and produce whenever possible.

Scanning the menu, Matt and I decided to share a couple of selections, and we were both immediately drawn to the Gaufres de Liege Waffles. Different from an American “Belgian waffle,” the Liege features a caramelized brioche-based dough, so the waffle is dense and very rich; no syrup is necessary (though it’s served with a cinnamon-streusel butter). The Liege is the most common type of waffle in Belgium, where it’s typically sold by street vendors and eaten by hand. I used a fork to dig in, savoring each bite as the waffle’s crunch gave way to a chewy interior.

We also tried the Gamberaia Lemon Ricotta Pancakes, a recipe from Florence. The mention of ricotta cheese and pancakes in the same breath must cause trepidation for some diners, as our waitress warned us a number of times that the texture differs from that of a traditional American pancake.
But as I dug into the moist pancake, which was laden with blueberries and topped with powdered sugar and lemon butter, I thought that the only warning these pancakes warrant is that they are addictive.

Of course, we couldn’t leave without getting our hands on some of those famous crumb cakes, so we decided to take home a few slices. Later, we tasted the cinnamon streusel crumb cake (the original), as well as the lemon and raspberry varieties. The moist cake serves as a base for a generous layer of crumb topping, where cinnamon presents a mellow note of spice and brown sugar lends subtle sweetness. The lemon and raspberry varieties each hold a dollop of fruit puree, giving the cakes a pleasantly tart contrast.

Tasting the cakes helped us better understand their reputation as a peace-making pastry. This mission began a number of years ago, when a customer contacted Sadler with a story about her two brothers who hadn’t spoken to one another in ages. She wanted to send each brother a crumb cake—from each other—with a message of reconciliation. Thus began Crumbzz’s foray into “diplomacy cakes.” Many customers experiencing quarrels with family and friends have taken up the custom, and Sadler has also sent “diplomacy cakes” to such world leaders and celebrities as President Barack Obama and John Boehner, Kobe Bryant and Shaquille O’Neal, and Vladimir Putin and Petro Poroshenko.

Though I haven’t found any proof that a crumb cake has diffused international hostilities, the cakes certainly brought smiles to Matt and me. We didn’t even argue over who was more deserving of the last crumb.