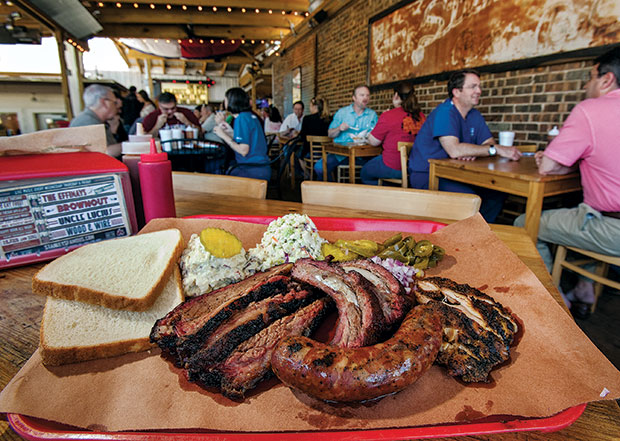 When out-of-town guests visit me in Tyler, and their mouths water for barbecue, my choice, hands down, is Stanley’s Famous Pit Bar-B-Q. The half-century-old eatery has grown into one of the Rose City’s hottest go-to dining destinations. The joint dishes up a tasteful blend of smoked meats, old-fashioned tradition, and live roots music—plus a slogan I can feel good about: “Be Kind. Have Fun.”

National praise over the last few years has vaulted Stanley’s into the holy-smoke pantheon of Texas barbecue joints, but my love affair with Stanley’s dates back to the 1960s, around the time that J.D. Stanley took over a 1940s barbecue shack and added a red-and-green neon sign proclaiming “Stanley’s Famous Pit Bar-B-Q.” (The City of Tyler Preservation Board recently designated the sign a historic landmark, the first sign so honored.) I still recall pushing open the restaurant’s screen door with my dad, who worked a short walk away as a barber. We’d order chopped-beef sandwiches served on butcher paper and sit side-by-side in one-piece school desks, at the time the only seating. We’d pour on the spicy sauce and eat lunch in smoky bliss, surrounded by knotty-pine walls and sawdust on the concrete floor to soak up wayward drippings.

The sawdust and school desks are gone, but folks still queue up at the original yellow laminate counter, surrounded by those same knotty-pine walls, to get smoky meats served on butcher paper. Stanley’s even serves barbecue for breakfast: Giant burritos are top sellers—large flour tortillas stuffed with scrambled eggs, cheddar cheese, and a choice of meats. My favorite day-starter is J.D.’s Breakfast Bowl—a large bowl layered with scrambled eggs, pan-fried red potatoes, cheddar cheese, and choice of meats.

And what a choice of meats it is! The array includes chopped or sliced brisket rimmed with ample bark (that crunchy, peppery, fatty edge that gives brisket its mouthwatering flavor), savory pork sausage, pulled pork, and spicy turkey breast, plus prize-winning baby back pork ribs, which are rubbed twice with 11 spices and cooked slowly for hours—as are the other meats—in the low-heat smoke of pecan wood.

For lunch, I tend to revisit childhood memories with a toasted bun piled high with chopped brisket on which I splay dill pickles, sliced onions, and squirts of sweet-spicy sauce, still made according to J.D.’s handwritten recipe. Sometimes I pick the long-standing signature sandwich, the Shrove, named for the pre-Lenten day of indulgence most of us know as Fat Tuesday. This pile-up of brisket, ham, and cheese (indeed, barbecue and cheese go well together) has a descendant sandwich called the Brother-in-Law that substitutes a sausage link for ham. I’ve yet to try Stanley’s most outrageous new sandwich, the audaciously dubbed Mother Clucker, which puts smoked chicken thigh, fried egg, cheddar cheese, spicy mayo, candied bacon, and guacamole (on request) between slices of jalapeño-cheese sourdough bun.

For dinner I often go whole hog with a mixed-meat plate of pork ribs, brisket, and sausage complemented with sides of fresh-made cole slaw, potato salad, and cowboy beans. The meats are so well seasoned that sauce is purely optional. Stanley’s boasts a full bar, so I grab a cold Texas beer and enjoy my meal on the open-air, covered patio, hopefully on a night featuring live music. (Fridays offer touring acts playing music from Latin funk and blues to Texas roots and reggae.)

Stanley’s remains the city’s oldest mom-and-pop restaurant. These days, the mom and pop are Jen and Nick Pencis, who have their own love affair with Stanley’s. That’s where they first met and where Nick proposed marriage. The thirty-something couple took over the eatery in 2006 determined to blend a half-century tradition with first-class service, creative new offerings, and live music. To keep up with demand, they boosted seating capacity to 150 and turn out 30-40 briskets, 60 racks of ribs, and eight or more pork butts daily. Even still, they almost always run out of something.

Over the years, I have known no one who eats at Stanley’s more often than my longtime friend and local historian James Wilkins. Forget award-winning ribs and funky sandwiches; James orders turkey. “The seasoning and smokiness give it an indescribable taste,” he says. “Stanley’s is such a quirky place, they should call it ‘quirky turkey.’”

To James and to me, there’s something special about Stanley’s. The place goes way back. It’s full of smoke and history and love. “Nick and Jen work hard to create a unique eating experience that really honors what’s gone on before,” James adds. “That’s my idea of a true Texas success story.”