Entrepreneur has an all-season option for cooking with the sun 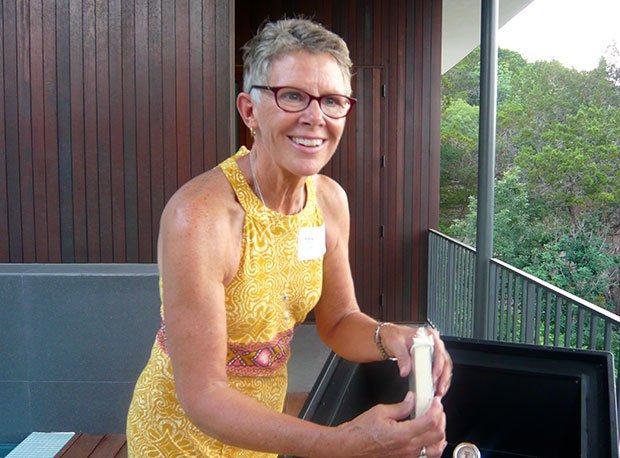 In the throes of a Texas summer, when midday temperatures often hover around 100 degrees Fahrenheit, we Texans are prone to note that “it’s so hot you could fry an egg on the sidewalk.” In truth, you can cook with the sun even when it’s cold outside. As long as you can see your shadow, it’s possible to cook everything from carrot cake to beef brisket in a solar oven.

I met recently with Austin-based entrepreneur Anne Patterson, whose solar-oven company Solavore aims not only to allow campers and boaters to cook gourmet meals without fire or electricity, but also hopes to empower communities in developing countries, especially Africa. There, Anne explains, women and children often spend many hours daily gathering fuel and cooking over open flame, an expenditure of time and energy that detracts from education, contributes to deforestation, and exposes them to harmful chemicals.

Patterson’s solar oven, a two-pot oven called a “Sport,” weighs nine pounds and can achieve cooking temperatures of up to 300 degrees, roughly the same cooking potential as a crockpot. It sells for roughly $229 and works by transforming sunlight into heat, and then trapping the heat for cooking. See www.solavore.com for details.

Lori: How did you get involved with a solar oven company?

Anne Patterson: My background is in high-tech, and I’ve worn a lot of hats over the years. I was doing some work for an Internet startup a few years ago when we participated in a program called Build African Schools, a nonprofit based in Palo Alto, California. The seed was planted when I realized how lucky we are to have so much when others have so little. I’m lucky enough to spend part of my year on a sailboat, and at some point I was introduced to this appliance called a solar oven. For people who have boats, one of the issues with cooking is heating up the galley. Fire is an enemy on a boat, so you don’t leave a pot on the stovetop. A solar oven allowed me to cook on deck, unattended, and I became an outspoken advocate.

In 2013, I was asked to submit a story to a blog that catered to the boating community, and I met some fellow enthusiasts who were producing and distributing a solar oven. The blog item came out and there was a huge interest. But about the time that people wanted to buy it, the founders fell on hard times. Maybe I could help, I thought. I eventually purchased the assets and the molds, and by January 2015 I’d rebranded and relaunched the company as Solavore.

Lori: In the United States, what are some of the challenges in presenting this product to people who are committed to their barbecue grills, microwaves, and gas ovens?

Anne Patterson: That’s an interesting and insightful question, because the challenge is really the same in Texas as it is in the world. It all boils down to change management, as people around the world are comfortable with the status quo. In the U.S., we’re presenting an alternative to fossil fuels, but it’s difficult to get people to accept change. In the developing world, it’s similar. As a woman there, I might spend seven to eight hours a day gathering firewood, going for water, and stirring food over the fire. That defines me as a person, and that’s my contribution to my family. If we tell them that here’s a product that frees them from that, what does that mean for their purpose? We’ll get there, but in Africa, as in the U.S., it’s a multistep process.

Lori: How did you select Austin as your headquarters?

Anne Patterson: Austin was a natural pick. Austin is full of out-of-the-box thinkers and early adopters who have a real interest in sustainability.

Lori: I know you spend a lot of time traveling, but when you are in Texas, what are some of the things you like to do in your free time?

Anne Patterson: I grew up in Wyoming, where it’s great fun to be out pedaling on a bike, and so I love to go mountain biking. And Texas has some really great mountain-biking opportunities. When my husband Ray and I are in Austin, we like to go to the Barton Creek Greenbelt, or out to Reimers Ranch west of town. What’s fun is that it changes with the seasons. Nothing’s prettier than going out there in the spring, but the live oaks are spectacular in the fall and winter.

We’ve also strayed as far as Waco and to Tyler. Waco’s Cameron Park is a favorite. The mountain-bike trails there are quite good and wind in and around the Brazos River. The trails are pretty basic if you stay close to the river, but there are lots of spinoffs that are kind of advanced.

Lori: What about places to eat and drink?

Anne Patterson: Well, mountain bikers tend to be beer drinkers. We seek out microbreweries, like Real Ale in Blanco and Thirsty Planet in Austin. As far as restaurants go, we like to try new places, but one of our regular spots in Austin is Odd Duck. You can’t go there wanting a specific menu item because it’s seasonal and rotates. But they have a Moscow Mule there that I order. They brew their own ginger beer for it. I don’t know what’s so good about it; obviously it’s fresh, but it’s more than that. It’s beautiful.