Written by: Jane Wu
Photos by: Will van Overbeek

Written by Art Williams, Photographs by Will van Overbeek | From the August 2016 issue | Updated: July 21, 2016 | Filed Under: Cuisine Confidential 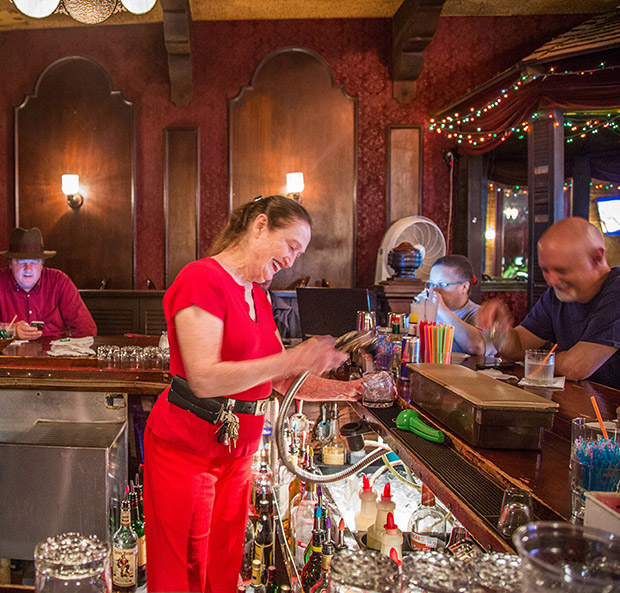 La Carafe and Warren’s Inn owner Carolyn Wenglar in a rare appearance behind the bar at Warren’s Inn.

You’ll find few bar owners as energetic and resourceful as Carolyn Wenglar, proprietor of Houston’s La Carafe and Warren’s Inn downtown. Vivacious and looking much younger than her 80 years, Wenglar can be found working most nights in her large, cluttered office upstairs above Warren’s Inn, and occasionally taking a break down the street at La Carafe, sipping a thimble-sized pour of red wine.

Warren’s Inn, named for her brother Warren Trousdale, the original owner of this bar and La Carafe, has been a steadfast part of Houston’s dive bar scene since 1987. Much of the credit goes to Carolyn Wenglar, to whom Warren bequeathed the bars after his death.

But she’s not just behind the desk doing paperwork in her office. When I spoke to Wenglar recently, she was repairing chairs, which accounts for much of the clutter. And when I met her at La Carafe a few months ago, she pointed out that she created new song title cards for the vintage jukebox because “you can’t find them anymore.” For years in addition to running both bars, she also tended to her family’s ranch in Brazoria County.

I spoke with Wenglar about Warren’s Inn, and wanted to find out what her favorite places are in Texas.

TH: Like La Carafe, the building that houses Warren’s Inn has had quite a colorful past. I know much of this happened before you took ownership, but tell me about the celebrities who used to come here, like Liberace, and about the gazebo.

Wenglar: I missed him (Liberace) whenever he came to the bar. But I did get to see him at Warren’s house. I brought our mom over to meet him and he let her try on his piano ring. She was so delighted! “Food & Beverage” was on the marquee before it became Warren’s. And before that it was a strip club, and that’s when I think the gazebo was built. They had a half-barrel next to it where the girls would get undressed.

TH: I read that La Carafe and Warren’s are favorite hangouts for some of Houston’s restaurant and bar owners. Who are some of your regulars?

Wenglar: Well, I can’t tell you who they all are since I’m usually upstairs. But I know Jim Pirtle, owner of Notsuoh (Houston spelled backwards) is a regular, and he was in here last night. Jim was the owner of Dean’s next door [to Notsuoh] when it was Dean’s Credit Clothing (bar). One of our bartenders also works at Dean’s.

TH: What’s the most popular drink at Warren’s?

Wenglar: All our regulars have their own favorites, but we probably serve more Vodka Martinis with olives, sometimes onions, and a twist of lemon usually.

Wenglar: There’s not really a typical day, but I get in and work on whatever’s needed, mainly the chairs, pay the bills, and whatever else needs to be done. I’m not behind the bar all that much as I was before.

TH: Tell me about your family’s ranch.

Wenglar: We have cattle, and our son John takes care of the ranch these days. It’s in Pearland in Brazoria County. I used to go there 3-4 days a week. I built fences, fed cattle, and other chores.

TH: I know that you and your husband aren’t able to go out and travel like you used to, but tell me about some of your favorite places in Texas over the years.

Wenglar: My husband and I used to go for dinner and dancing at Texas Tumbleweed. The restaurant would sometimes have parties going on but the servers would still wait on us. We’d teach some of them how to line dance when they weren’t waiting on customers.

I’ve been to Caverns of Sonora couple of times. We’d stop there on the way to Colorado.

Also, I remember a park south of Lake Livingston where our son John liked to go kayaking. When I was a teenager I went out to Lake Buchanan with friends. We rented a boat, and we’d go out and jump off from the boat to swim. I enjoyed watching the speedboats race, too.