On May 12 at Austin’s Fair Market, bartender Jen Keyser and her team at Geraldine’s, the bar/restaurant at Hotel Van Zandt in Austin, won the “Official Drink of Austin” contest with a concoction she calls “Far From the Tree.”

Half-Step is at 75 Rainey St. in Austin.

Standard Pour is at 2900 McKinney Ave. in Dallas.

The Esquire Tavern is at 155 E. Commerce in San Antonio.

Krause Springs is in Spicewood, about 30 miles northwest of Austin.

The drink—made with Treaty Oak rum, fresh-pressed apple juice, Paula’s Texas Orange liqueur, and lime juice—enjoys a nutty complexity thanks to a Texas riff on a tiki-drink classic, a milky ingredient called orgeat, which is normally made with almonds and orange flower water. Instead of using almonds, Jen made good use of the state’s official nut, the pecan—and took home the prize. (The contest itself is held annually and raises money for the Austin Food & Wine Alliance’s Culinary Grant Program.)

I spoke with Jen about the challenges of bartending, the advent of craft cocktails, the rewards of determination and self-confidence, and where she likes to go when she’s not getting creative behind the bar.

Jen: I sometime say that I have been on a lifelong adventure in the service industry. My mom and dad met while working in a Taco Bueno in Abilene. My parents like to tell the story about how when I was a baby, they’d prop me up near the taco-prep table with a pacifier in my mouth.

It’s a family thing, I guess: When my dad was growing up, his parents owned a burger joint in Bartlesville, Oklahoma. Eventually, when I was about nine or 10, my dad bought his first restaurant in Longview; it was called the Loop 281 Café. My folks were divorced by then, and I was living in Abilene. But he lived in the offices above the restaurant in Longview, and I would visit him in the summertime. He’d put me in charge of restocking the salad bar or sweeping the floor.

I got my first official job when I was 14 in Southern California; I waited tables at a retirement home. I was legally allowed to work from 4-9 p.m., which was perfect for the retirement home because they eat at 4:30. Later, I got a job as a hostess, and I worked at that place all through high school.

After college, when I was 21 or so, I made my way to Austin. My dad was the general manager of the Texas Land and Cattle Company here, and he said, “You should move to Austin. If you don’t like it, you can always move back to California.” So I drove out in my Honda Prelude and said I’d give it a year. That was almost 18 years ago. I was determined not to go into the restaurant business. I tried everything; I worked in a jewelry store, as a bank teller, in a call center.

But my dad had opened a restaurant called the Fork Café in Driftwood, and it got so popular that he opened another Fork Café in Wimberley. So I decided I’d work for him and wait tables. I was there while he took over his next spot, which would be a bar and music venue. That was my first bartending job. I vividly remember when someone ordered a martini, and I didn’t know what the base spirit was. I had to look up the recipe, and I didn’t know how to measure anything. When I gave him the drink, I remember his face, and what he said: “Just give me a beer.” I told myself, “I will never do that again. I will strive to be better.”

TH: And then you worked in a series of bars and restaurants in Austin?

Jen: Yes, I didn’t like the commute to Wimberley, so I got a job at the Spider House Café in Austin. They had just gotten their liquor license, and I was hired to take over the bar— without knowing much about a bar. But I learned how to make actual drinks, and how to be organized. After three years there, I went to work at the Whip In, which was just a roadside beer store then. My beer knowledge went through the roof.

Then I got a call from the Alamo Drafthouse group, and they were opening up the Highball (the theater’s bowling alley concept). They asked me if I’d be willing to start as a server, and I thought, “anything to get my foot in the door.” A month in, they needed bartenders. That was my first legitimate bartending gig. But I still had a lot to learn. “Oh, we measure the ingredients? Oh, there are recipes? What’s a speed pour?” It was a fake –it-till-you-make-it moment.

TH: It sounds as though things were pretty crazy.

Jen: Then came the craft-cocktail movement, and everything changed.

Jen: Well, I knew it was way over my head. I remember getting the menu and it was like reading a foreign language. I spent days researching and learning what the words meant. At the time, I didn’t know that there were cocktail books, but of course I discovered them. A book called Liquid Intelligence had three chapters on ice. Three chapters! I really started geeking out on modern cocktail books. And then I wanted to get back to the basics. Within a short time I became the head bartender. I showed initiative. I was studying. I was reading everything I could.

I have to give credit to my colleague Brian Dressel. He would tell me the backstory of every drink, every process. He taught me all of my technique–how to shake, how to stir, literally everything I know about craft cocktails. I thought I knew, but I had no idea.

TH: Kind of seems like you’ve worked at practically every cool bar in Austin.

Jen: Ha! After Midnight Cowboy, I spent a year at Contigo, and then Hotel Van Zandt came by. The hotel hadn’t opened yet, and they were looking to fill positions. For the bar manager, they weren’t pursuing a local person; initially they wanted someone from Los Angeles. We had a lot of meetings. And eventually I started believing in myself. The job was way above my experience level, but I’m very organized and motivated. Yet I don’t want to do something unless I can do it well.

When I got hired, the hotel was supposed to open in July, but we finally opened in November 2015. I thought I’d have a month to learn the ropes and figure it all out, but instead I got four. I went to Puerto Rico to learn about rum. I literally bought 25 cocktail books. The company (Kimpton Hotels) sent me to Washington, D.C., for three weeks to work in the hotel there. I got lots of training.

TH: Your cocktail menus at Geraldine’s have lots of Texas elements, like Texas ingredients and names.

Jen: And music themes, too—to go along with the theme of the hotel. I want to be whimsical, not too serious. I want to be unpretentious. We have drinks like “Ancho and Lefty,” and “Deep in the Heart,” and “Willie’s Cup.”

TH: Tell me about Willie’s Cup. This is a great drink, and the presentation—the cup is wrapped in a red bandana and the garnish is attached with a roach clip! 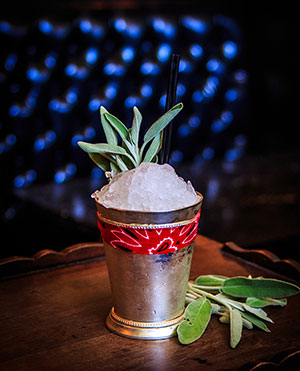 Jen: Well, normally I create a cocktail then create a name. But come on, it’s Texas. I knew I had to have a Willie cocktail. I used him as the inspiration, and came up with a mixture of rye whiskey, hemp seed milk, and sage. I had been researching an ingredient called orgeat (a creamy ingredient usually made with almonds and orange flower water), and I found a pistachio orgeat recipe. I thought, “You should be able to make hemp seed milk.” It was so easy. The roach clip and the bandana came later.

Jen: That was a great twist that makes the drink shine. The pecan really plays well with the apple. It’s delicious!

TH: A lot of great Austin bars competed for that title. Besides those spots, where do you like to spend time when you’re not working at Geraldine’s?

Jen: My favorite for inspiration is Half-Step. Owner Chris Bostick revolutionized the ice-program idea with his LA bar Varnish. They cut their ice by hand with chainsaws! There are good people and great drinks.

I love the Townsend and its shotgun little space on Congress. Fantastic.

If I want to hang out and have a beer, I go to King Bee. I love to eat at Launderette; the food is so interesting and chef Rene Ortiz changes things up.

TH: Any recommendations for outside of Austin?

Jen: I like Whiskey Cake in Plano. In Dallas, I always go to Standard Pour or Parliament–classic cocktail bars. And if you’re in San Antonio, you have to go to the Esquire Tavern or The Last Word.

TH: What kinds of things to you like to do in Texas during your down time?

Jen: If I’m off for a couple of days, I like to go swimming at Krause Springs, and the Frio River is one of my favorite places to go. I’m a nature girl. When I’m not making drinks, I like to hang out with my dog, watch movies, just relax.