In Shiner, an identity bolstered by sausage and beer 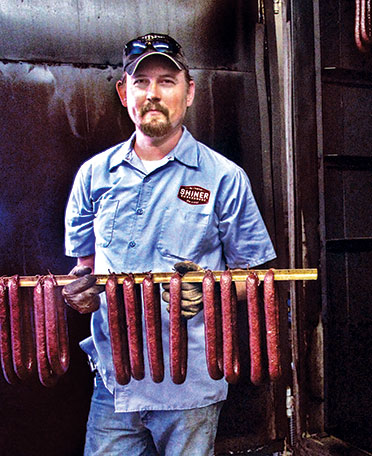 Spoetzl Brewery, founded in 1909 and now the fourth-largest craft brewery in the United States, has made quite a name for the Central Texas town of Shiner.

But visit the self-proclaimed “cleanest little town in Texas,” just an hour and a half southeast of Austin, and you’ll see there’s much more to it than good beer.

In the late 1800s, Czech and German immigrants began settling in the area, founding a community originally known as New Half Moon. Among them were members of the Patek family, who arrived in 1889 from Czechoslovakia and established themselves as accomplished musicians. In 1937, descendant Joe Patek opened Patek Grocery and Market, where he sold groceries and smoked meats that immediately became popular within the close-knit immigrant community.

In the 1940s, Joe assumed leadership of the family’s popular polka band and renamed it the Joe Patek Orchestra. The band’s adaptation of the old Czech ballad “Farewell to Prague,” modernized as “The Shiner Song,” became the unofficial anthem of their hometown. Thanks to this and other polka hits, the Joe Patek Orchestra toured extensively throughout Texas and beyond, traveling with a signature trailer embellished with the Shiner Beer logo.

Through the years, Spoetzl Brewery has maintained close ties with the Patek family, trading beer for sausage, and serving their products alongside Patek’s at polka-infused church picnics and town gatherings. Spoetzl captured the essence of smoked meats in their 2010 special-release Smokehaus mesquite lager, and Patek Grocery uses Shiner Bock in its popular beer bratwurst.

Patek Grocery and Market is still a community hub in Shiner. And while Joe Patek, who passed away in 1987, is no longer there to greet the neighborhood kids with a smile and a bag of M&Ms, much has remained unchanged at the small-town market.

Two vintage meat cases showcase cold cuts, cheeses, and sausages, as well as steaks, fresh meats, and poultry. Cashiers still tally up charges on old-fashioned registers, and remnants of the original black-and-white flooring mix with more contemporary white linoleum. Butchers still stuff and smoke sausages on-site, including the grocery’s famous dried sausages, which are smoked for two-and-a-half days. Customers also rely on Patek’s for Czech staples such as locally made egg noodles and bags of poppy seeds for making kolaches, along with produce from local farmers, freshly baked bread, and kegs of Shiner beer. And polka is still the store’s boisterous soundtrack, reminiscent of the “Patek Orchestra Polka Hour” radio show, which used to broadcast daily during the noon hour.

Polka is still the store’s boisterous soundtrack, reminiscent of the “Patek Orchestra Polka Hour” radio show, which use to broadcast daily during the noon hour.

“Everyone in the store would be whooping it up together, including the customers,” remembers Brian Patek, Joe’s grandson. “The store would go crazy. Everyone would be shopping, singing, and having a good time. That’s my theory why we’ve had to replace the floor so many times.”

Brian’s brother Keith says, “I remember getting upset with dad at the start of my seventh-grade summer when he told me it was time to get my rear to work. Man, am I ever thankful! Working the four long aisles of our little grocery store taught me more than I could have ever imagined.” To this day, Patek’s
welcomes the young people of Shiner as cashiers and shelf stockers, often giving them their first job experiences.

Brian had always dreamed about sharing his family’s recipes outside of the town of Shiner. After graduating from The University of Texas at Austin, he went into medical sales and began saving up money to make it happen. In 2006, Brian and Keith launched Patek’s Shiner Smokehouse; today the company makes six different varieties of sausage, including the grocery’s original spiced pork-and-beef sausages, Shiner beer bratwurst (great with sauerkraut and spicy brown mustard), country-style smoked sausages (perfect for making pigs-in-a-blanket), jalapeño-cheddar sausage, and the popular smoked Italian sausage, an all-pork link seasoned with fennel and oregano that adds depth to spaghetti sauce and pasta dishes. (You can buy them online and in grocery stores and specialty markets throughout the state.)

But Shiner will always be home base (and the famous dried smoked sausages and red wieners—popular at backyard barbecues and Little League games—are a specialty only at Patek Grocery). “There is truly something about the town, the people and the Czech/German culture,” says Brian. “After all, conversations over cold beers are some of the most enjoyable and meaningful conversations one can have.”