Dining on the Dock of the Bay 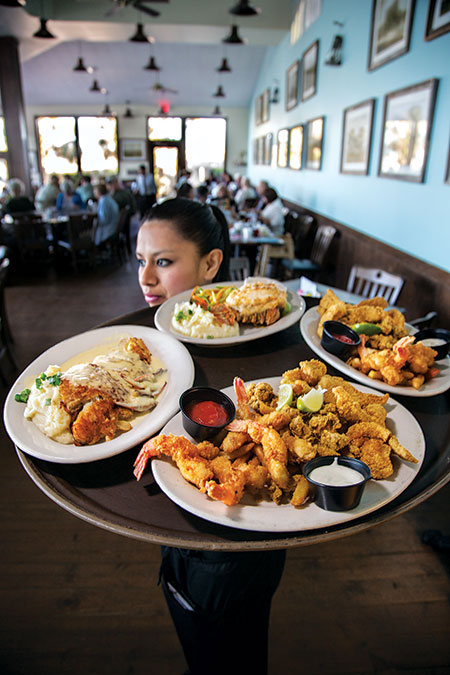 Inside Dirty Al’s at Pelican Station in Port Isabel, I have a front-row seat for watching the Laguna Madre: A tugboat pushes barges on the Gulf Intracoastal Waterway, the Black Dragon pirate ship and dolphin-watch boats crisscross the bay, and cormorants float semi-submerged beyond the patio.

Sitting in the restaurant on the dock of the bay, practically in the shadow of the Queen Isabella Memorial Causeway, I’m transfixed as the fog rolls in and out, hiding then re-revealing the barges and boats bringing commerce to the area.

In 2003, restaurateur Alfonso “Dirty Al” Salazar opened his first restaurant on South Padre Island, three miles from this spot, transforming his bait stand and beer bar into a hotspot for fabulous fried shrimp. With help from his culinary-school trained sons, Salazar soon expanded the menu and opened locations at Port Isabel and McAllen—with a fourth due soon in Brownsville. Dirty Al’s at Port Isabel—a half-hour drive from our home in Harlingen—is the place my husband, Guy, and I take out-of-town friends for food that is consistently delicious.

Other diners provide a happy background hum as Guy and I join two friends for a late-afternoon meal. Sam, our attentive server, guides us to some of Dirty Al’s specialties.

For happy-hour starters, we order two plump, lightly breaded crab cakes atop a light three-cheese sauces, laden with popcorn shrimp, garnished with scoops of fresh pico de gallo. Guy, who is allergic to shellfish, shares his platter of fragrant fried mushrooms sprinkled with Parmesan cheese. Between sips of margaritas and savory bites, we catch up as the fog rolls in again, temporarily limiting our view of the cormorants and the pelicans perched on pilings.

Those pilings trace the path of the 1,000-foot-long wharf that once ran into the bay from the Rio Grande Railroad depot, built here in 1872. Pelican Station’s exterior mimics the old train depot, complete with an authentic RGRR caboose nearby. The railroad itself, a narrow-gauge line that connected what was then called Point Isabel to Brownsville, some 26 miles away, offered Brownsville merchants an alternate trade route from the steamboat service operated along the Rio Grande by entrepreneurs Richard King and Mifflin Kenedy. The train was used to carry both freight and beach-bound tourists through the 1930s.

And so, Dirty Al’s is the rare seafood restaurant with a railroad theme: Railroad lanterns complement large-format, early-1900s photographs depicting the train and its passengers, including women in long skirts posed on the cowcatcher. Other décor elements focus on a sea theme, with pelican mobiles circling over the bar and sculptures mirroring the birds on the water outside.

Our waiter recommends we order a flounder or red snapper dish, prepared with locally caught fish. “The flounder and red snapper are as fresh as can be,” he tells us.

The fog lifts enough to see South Padre once more, and the entrées arrive. Guy’s whole red snapper, scored and baked with butter, pepper, and garlic, then crowned with ripe tomato slices and juicy lime wedges, looks like a still-life painted by an Old Master. The dish is eye-popping enough to inspire a stranger at the next table to ask, “Oooh, what did you order?”

Snuggled next to garlic mashed potatoes and crunchy, julienned squash and carrots, the snapper not only looks great, but tastes wonderful, too. “Perfectly cooked,” Guy says. When the catch is running small, the restaurant often puts whole flounder and snapper on special, our waiter adds.

One friend had confessed that she cannot resist Dirty Al’s seafood chalupas and orders them every time. So I sample them and see her point: They’re a tasty mix of fish, shrimp, crab, and scallops scattered on flat crispy tortillas and lavished with a colorful blend of pico de gallo, chopped cabbage, and chipotle sauce.

I almost always order Dirty Al’s jum-bo fried shrimp plate. Okay, sometimes the fried shrimp and oysters. Dirty Al’s uses only Gulf shrimp, which are tasty morsels dusted with bread crumbs and deep-fried; that accounts for the light and crispy coating. “You can’t compare Dirty Al’s shrimp to any others,” my friend Terrie says, between nibbles. “There’s never any disconnect between the shrimp and the coating.” And the fries dredged in Dirty Al’s special seasoning before frying come out fluffy on the inside and crunchy on the outside.

But today I buck tradition and order the Red Snapper Rockefeller, a substantial fillet partnered with spinach, bacon, and shrimp in a delicate, three-cheese sauce. What’s not to like? Conversation falls silent as we settle into satisfied murmurs.

We’re too sated for dessert, so as a nightcap we stroll the patio deck, watching the lights on the water until the fog rolls in again, obscuring everything but the memory of a good dinner with friends and a spectacular bay view.