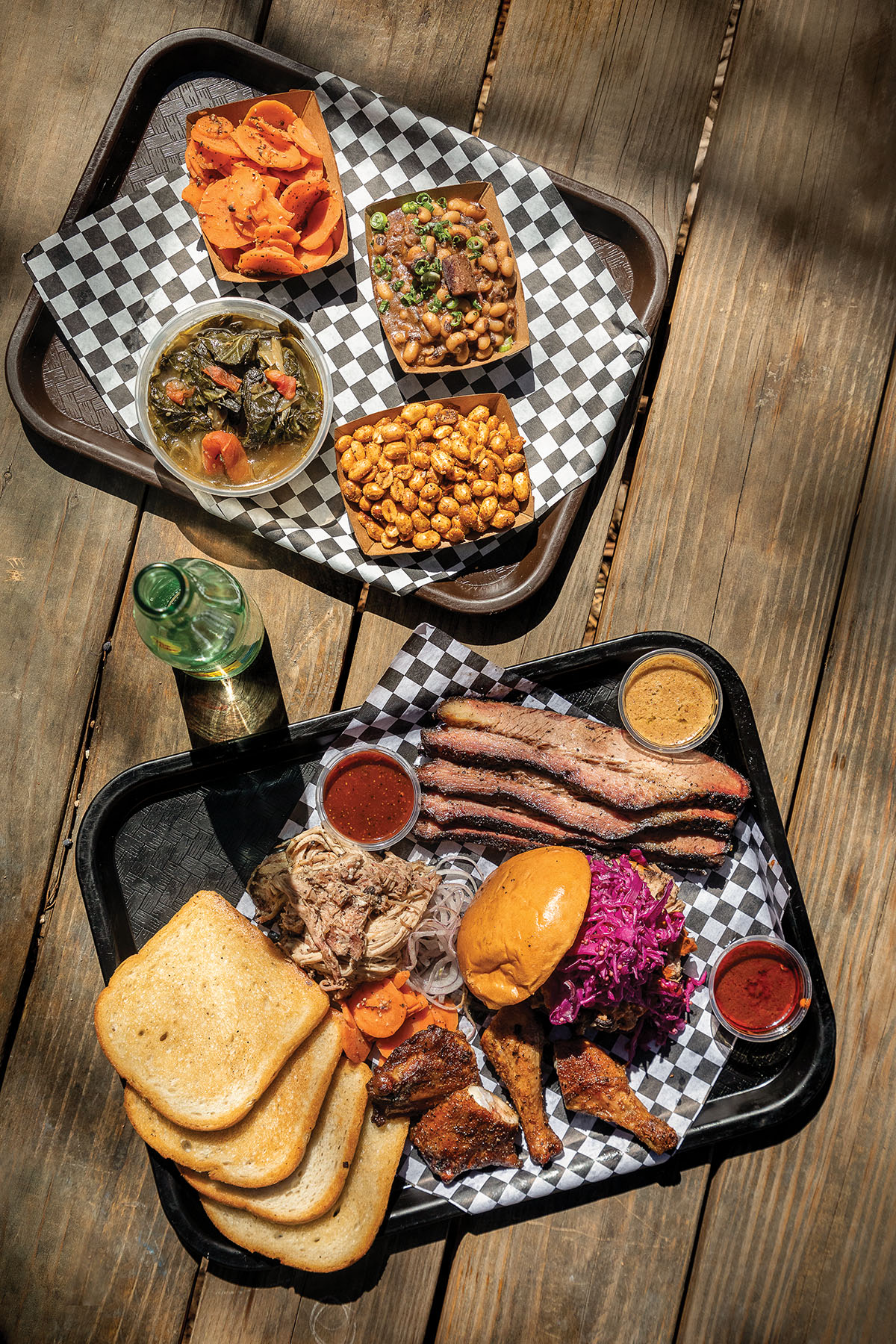 The barbecue and sides from Distant Relatives are made using plantation cooking methods.

When Damien Brockway launched his food truck, Distant Relatives, early last year in the parking lot of an East Austin tire shop, it was a radical departure from his fine-dining background. Brockway had garnered accolades at Austin restaurants like popular sushi spot Uchiko and the now-closed tasting menu restaurant, Counter 3. Five. VII, which left many diners eager for his next act.

No one—including Brockway—was expecting his first independent venture to be a 128-square-foot box on wheels. But, when the original location for his modern African American restaurant fell through, Brockway pivoted to the truck, which is now permanently located at South Austin’s Meanwhile Brewing.

While Distant Relatives is frequently referred to as barbecue, that’s an oversimplification of the layered, nuanced dishes Brockway and his team—sous chef Wesley Robinson and assistant pitmaster Omari Mackey—produce in such tight quarters. Brockway’s wife, Kornpawee Brockway, oversees service operations and can often be found taking orders at the window.

“The name is a collaborative homage to our heritage,” Damien Brockway says. “That’s why the ‘Relatives’ in the name is plural. I could have just called it Brockway BBQ, but it’s about so much more than just me.” 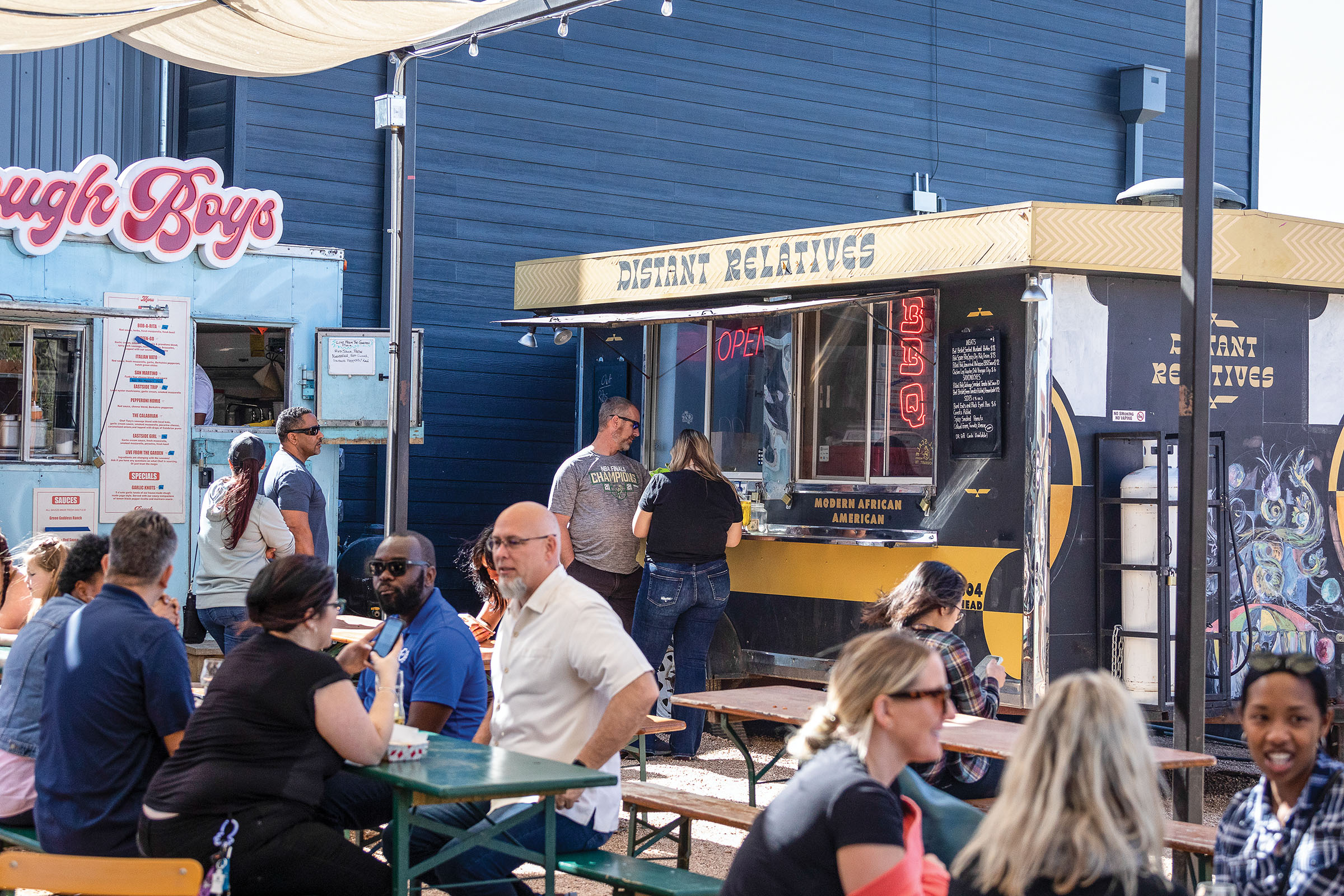 A busy evening at Meanwhile Brewing 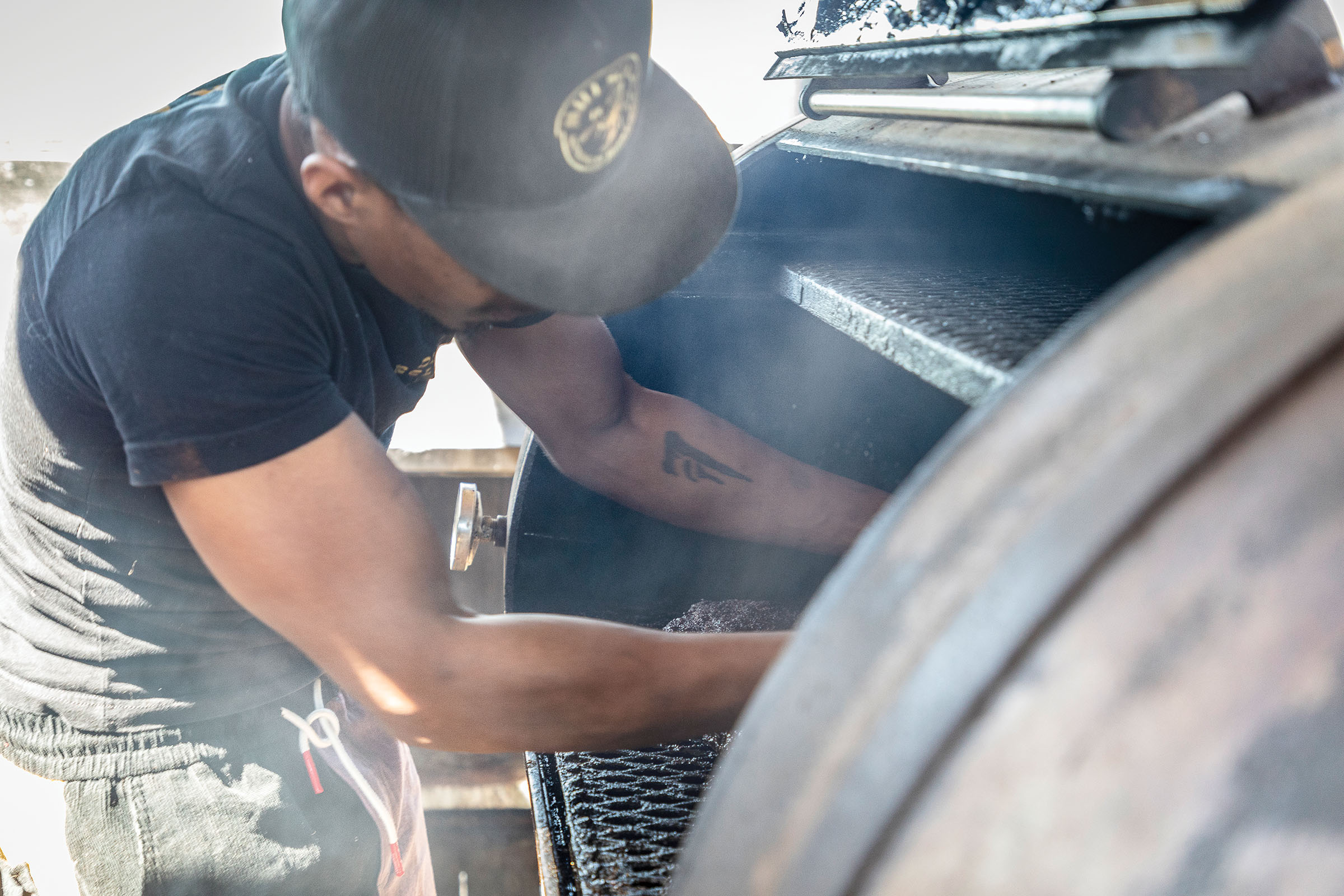 “Plantation cooking is a huge part of the evolution of American barbecue, and you’ll also find that influence in soul food,” Brockway says. “It was all done using live fire, and it’s important to us to emphasize that, as well as incorporate elements of smoke into the menu. Distant Relatives is about understanding and preserving this heritage and finding modern applications for historic ingredients and cooking techniques.”

Brockway has traced his own ancestry back to his maternal great-grandparents, who were sharecroppers in Virginia. He was born and raised in Connecticut, where he grew up gardening and cooking with his mother and both sets of grandparents. “Holidays, we’d all gather for a backyard barbecue,” he says. “It was always a potluck situation. My maternal grandfather was a meat and potatoes guy; he’d get a cast iron skillet scorching hot and add calf liver or make barbecue chicken or collard greens.”

The chef also incorporates family recipes into the menu, like peas with burnt ends, as well as those of his team: A golden rice and coconut ambrosia with bird chile relish was inspired by a similar dish Mackey’s mother made on Juneteenth to educate him about his own heritage. “Our style of cooking comes from the heart,” Mackey says. “It’s close to home for me.”

The variety of cultural influences on Brockway’s cuisine result in rich and complex dishes. He methodically builds flavor using technique—fire, smoke, cast iron—and the “root-to-stem, nose-to-tail” cooking born out of poverty. “Slaves could have private gardens outside of their cabins,” says Brockway of the prolific and diverse range of cookery and preservation methods found in plantation cooking.

At Distant Relatives, meat trim and drippings are infused into dishes like the lima beans with smoked pork butter, and burnt ends take the place of ham hock in the black-eyed peas. Smoked chine, or backbones, left over from the pit are turned into barbecue bone stock; vegetables are pickled; peanuts are smoked and served as a snack. 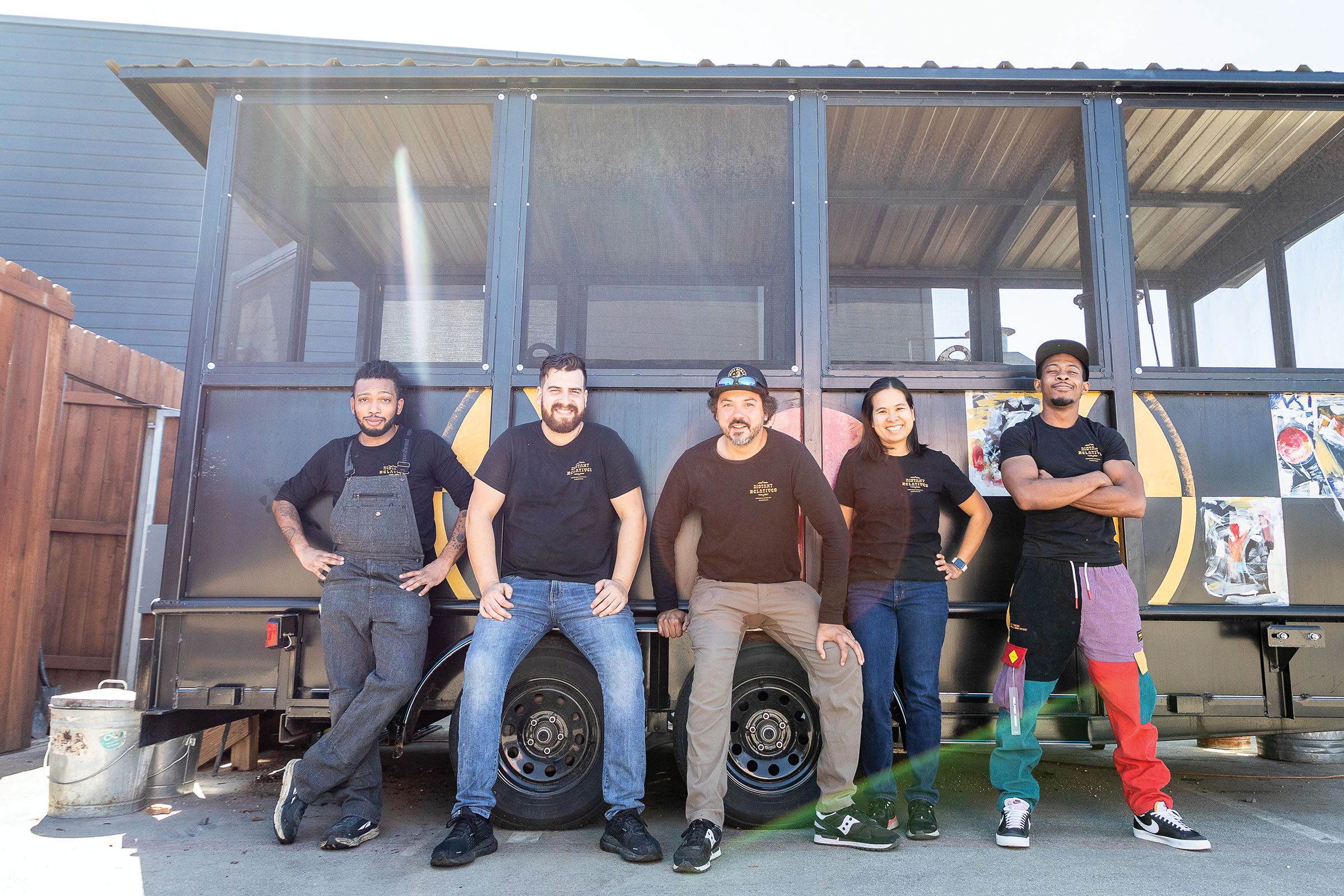 Brockway graduated from the Culinary Institute of America in Hyde Park, New York, in 2013. His foundation in classical French cuisine led to stints at some of the top restaurants in San Francisco, Boston, and Austin, but by the time Brockway arrived at Counter 3. Five. VII, he was questioning his career trajectory.

“When you’ve been cooking professionally for over 20 years, you get to a point where you ask yourself, ‘Why am I cooking this?’” he says. “We used a ruler at Counter to measure knife cuts, and I had to wonder, ‘Why am I here? Why am I stressing out about a ruler?’”

The July 2018 closure of Counter left Brockway “rudderless.” His friendship with Jeffrey Stuffings, founder of Jester King, led to a stint revamping the brewery’s­ culinary program, but Brockway­ was already conceptualizing Distant Relatives.

With time and, hopefully, a permanent restaurant location, Brockway plans to expand on what he and his team are building at Distant Relatives: an inclusive place that supports “agricultural, artisan, and underserved communities” through partnerships, education, and job training.

“We’re still educating ourselves, reading about the historical context of these ingredients as a way to keep our heritage documented,” he says. “This is what I like to eat, how I like to cook, but I also cook to make people happy. I’ve finally arrived at what I was meant to do.”