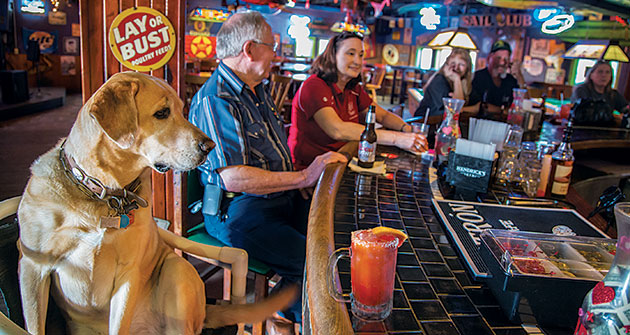 I’m at the “coolest honky tonk on the Texas Riviera,” so claims the large, plywood sign outside. Having passed by many times, this is my first visit to the Salty Dog Saloon, a laid-back bar on Port Aransas’ main drag.

There’s a not-too-bothersome haze of smoke in the air, pool tables, a digital jukebox, and a handful of weathered regulars—salty dogs themselves—who turn their heads to catch a glimpse of each newcomer walking through the door. The place is a little bit country and a little bit rock-and-roll, and my girlfriends and I have decided to belly up to the bar for a quick refreshment. We would soon be spoiled forever by this bar’s version of a classic cocktail.

“Four salty dogs, please,” I order for my crew, figuring it’s only appropriate to partake in the grapefruit juice-and-gin concoction that gave the establishment its name. The salty dog, not nearly as popular as the Cape Cod, screwdriver, or tequila sunrise, is a drink folks rarely request but bartenders are expected to know. Dating to the 1950s, the salty dog is a variation of the popular greyhound, made “salty” with a salted rim. Some people order it with vodka, but gin is considered the norm, and that’s how they’re served here at this popular island hangout. It’s a beverage I enjoy but never think to order, because back home in Fort Worth, most bars have embraced the current craft-cocktail trend, and I’m usually sidetracked by the latest martini list. But this is Port Aransas, and those lists don’t exist here.

“Here you go, ladies,” says the bartender, presenting salty dogs like I’ve never seen. Sitting before us were four frosty, ice-filled, and salt-rimmed
mugs, each one garnished with a large ruby-red grapefruit slice and filled with citrusy liquid the color of a Gulf Coast sunset. The presentation was unexpected from this no-frills bar, and the taste was as exhilarating as the ocean air. Another round would definitely be in order.

“I have people come from all over who say they came just to have our salty dogs,” says owner Rhonda Shirey when I ask about her version of the classic beverage. “If you order one at an airport or something, they would pop open a can of grapefruit juice, but mine is ‘on the gun’ and it’s mixed with syrup
and CO2.”

By “on the gun,” Rhonda means that her grapefruit-juice supply is connected to her soda spout, providing for a crisp, carbonated combination. She says she serves the beverage in a frosted mug because “it looks prettier,” and the big grapefruit slice adds aroma and style. A dog lover and former bar owner from Austin, Rhonda moved to Port Aransas, once just her “getaway place,” 20 years ago. It was her dream to open the Salty Dog Saloon.

“Now I’m an expert fisherman. I know every fish out there,” she says. “When I opened the bar, I knew there was a drink called the salty dog. Now, we’re world-famous for the drink.”

Whether she’s exaggerating or not, I believe her assertion with one sip. Fittingly, Rhonda also has a dog named Salty, who enjoys sitting at the bar with patrons. “He’s a yellow Lab, and sometimes folks come to the bar just to see him,” she says, adding that friendly, well-behaved dogs are also allowed inside to keep Salty company.

Along with the signature drink, the Salty Dog Saloon also hosts regular karaoke nights, generally Wednesday through Sunday, starting around 9. And customers—especially tourists— can get a little crazy when they lose all inhibitions and decide to sing in front of strangers.

“They’ll never see these people again, so they’re not embarrassed to let loose,” says Rhonda. “People love our karaoke nights. In a lot of places, you’re listening to a band and after about an hour, you might get bored. But for karaoke, you’re waiting to get up there and sing your song. I think that’s why people love coming here.”

We’re not driving, and so with our second salty dogs in hand, we encounter a bit of this karaoke magic as the jukebox goes silent and the small stage lights up. Before we know it, the bar is full and festive, and we’re on our third game of shuffleboard, dancing between turns to hit the pucks and cheering for each brave soul who passionately belts out a favorite tune. What was supposed to be a quick stop for a drink has turned into another memory-making Port Aransas evening we’ll look to repeat.